The name of the new movie, 21, refers to Blackjack, the popular casino game. This movie is the fictionalized version of a fictionalized book about a group of MIT students who made a lot of money playing Blackjack by counting cards. Counting cards is a well-known method of increasing your chance of winning. Basically, you count how many high and low cards have been played from the deck at a particular Blackjack table and only play when the conditions favor the player over the dealer. Casinos take a very dim view of card counting and, although it is not illegal, card counters are generally banned as soon as they are discovered. This brings us to the MIT Blackjack Team. Their innovation was to confuse Casino security surveillance by having teams of people working together, where one person counted cards and then signaled to a second player when a particular table was ripe for the picking. 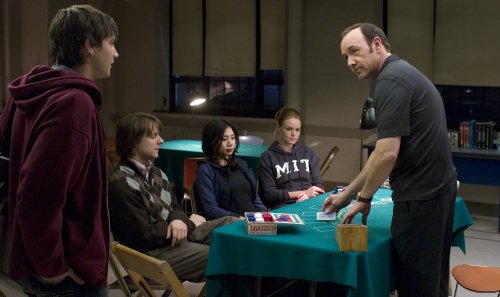 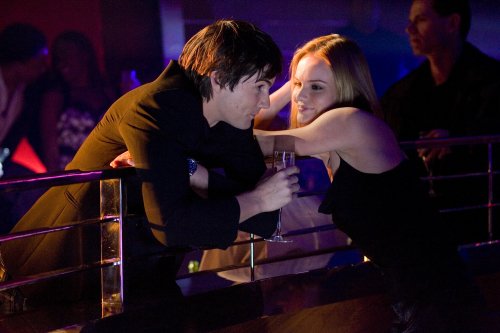 Which brings me back to the movie, 21. In this doubly fictionalized (can you fictionalize fiction?) version of the true story, all that can be said is that it was "inspired by real events." In the movie, a slimy professor (Kevin Spacey) organizes a group of students to become a card-counting team as described above. BTW, in real-life, there were no professors involved. Anyway, Spacey particularly wants to recruit a straight-arrow, pre-med, card-counting, genius of a student (Jim Sturgess) to join the team (Kate Bosworth, Liza Lapira, Jacob Pitts, & Aaron Yoo). At first all goes well, but greed, sex, and alcohol take their toll on the team. The bright lights of Vegas and Bosworth lead Sturgess astray, and worse, lead him to ditch his geeky BFF's (Josh Gad & Sam Golzari). The team begins to self destruct and then the plot becomes twisty as everyone tries to betray everyone else. Plus, the head of casino security (Laurence Fishburne) is just a little bitter about the fact that he is not rich even though he can count cards too, and takes it out on card counters with his fists. 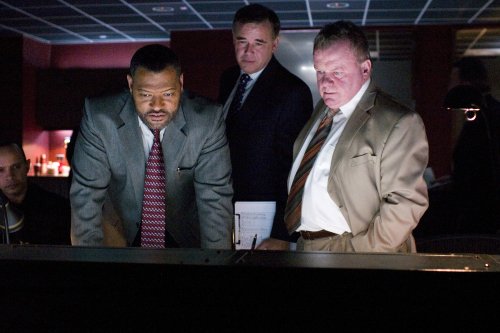 21 was directed by Robert Luketic, whose previous films, after a good debut with Legally Blonde, are Monster-In-Law, and Win a Date With Tad Hamilton!. Need I say more? 21 is directed without any imagination or idea of pace or of storytelling. There's nothing wrong with the cast of 21. But someone needs to tell Kevin Spacey to stop playing the same slimy, world-weary, bitter role. I love him (e.g., The Usual Suspects) but I'm really tired of it. Sturgess is a really cute and appealing guy, maybe even cuter than Bosworth. I missed Across the Universe, which was Sturgess' first starring role. He's definitely the best thing about 21, but that's not saying much. Bosworth frowns a lot. The rest of the team, particularly Yoo (Disturbia, Rocket Science) and Lapira (Cloverfield), are slightly entertaining each in their own way. Josh Gad & Sam Golzari, as Sturgess' true friends, do such a good job of being geeky, Asperger's sufferers that even I don't want to be friends with them. Laurence Fishburne goes pretty dark as the security guy. But he is as one-dimensional as the rest of the cast.

If you want a great and fun Las Vegas ripoff movie, then think of another number, not 21, but 11 as in Ocean's Eleven. The latter movie is totally unbelievable too, but that is part of the fun. 21 isn't fun and it spends an inordinate amount of time explaining the set-up, i.e., card counting, for no good reason. If the real MIT Blackjack Team had been as stupid as the team in the movie, they would have come home from Vegas empty handed. The movie makes it look like card-counting allows you to win every hand of Blackjack. Actually, it increases your chances of winning by only about 2%. Plus, our team of zany misfits has only 5 people and they gamble in the same casino all the time. So, even though they wear stupid disguises, they would have been recognized and banned from the casino in short order. Then when security finally does come after them, they embark on a ridiculous Keystone Kops chase through the Casino. Actually, the wildly fantastical Ocean's Eleven is more realistic than 21. I have to say that I really hated this movie. Suspension of disbelief is one thing, but 21 is beyond belief.