On September 11, it will have been five years since 9/11. The fact that I can just say 9/11 means that this is our Pearl Harbor, the one date that, like it or not, has defined our lives for the last 5 years and for the foreseeable future. Needless to say, a huge number of documentaries and news shows are planned to "commemorate" 9/11. See the list here. I remember where I was five years ago on September 11th and I'm sure you do too. And I really don't need any help remembering. So, I would say that I'm in the camp that thinks that maybe some more time should pass before we start making movies about 9/11. But that isn't going to happen. I do recommend a documentary that came out soon after 9/11, called imaginatively, 9/11. It was made by two French brothers who were doing a documentary about a rookie fireman in Manhattan. They had been sitting in this firehouse for weeks before 9/11, and I kid you not, they had not been called out to one fire. And then they were called out to the World Trade Center. They went with the firemen and filmed in the World Trade Center. They got out but almost none of the firemen did. 9/11 is worth seeing.

This brings me to the new film, World Trade Center. It is the second feature film about that day to be released this year. The first film, United 93, didn't attract me at all. It is a true story except that most of what happened is unknown since everyone involved is dead. World Trade Center is also a true story but the people involved are still around. This film is about two Port Authority Police Officers, John McLouglin (Nicholas Cage) and Will Jimeno (Michael Pena). Here's a picture of the real John McLouglin and Will Jimeno with the actors who play them (oops, I'm giving something away here). The casting isn't bad: 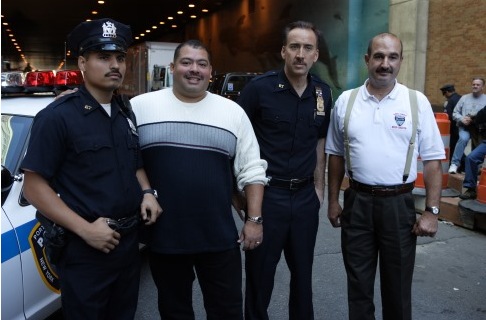 Anyway, on 9/11, Will and John rushed down to the World Trade Center and when the towers fell down, they were buried in the rubble. This movie follows them, their co-workers, and their families on that day. In the chaos after the collapse of the towers, no one knew where the officers were and it was feared that they were dead. The movie focuses on the wives (Maria Bello & Maggie Gyllenhaal) of the two officers and how they try to hold themselves and their families together. Meanwhile, an ex-Marine (Michael Shannon) in Connecticut decides he has to go to New York City to help out. He sneaks into the World Trade Center site and starts searching for survivors with another Marine (William Mapother). They find Will and John and then a cop (Stephen Dorff) and an ex-paramedic just out of rehab (Frank Whaley) help to keep them alive until they can be rescued.

The cast is great, led by Cage, Pena (Crash), Gyllenhaal (Secretary) and Bello (A History of Violence). And, even though I hate to see Gyllenhaal and Bello stuck in the typical wife roles, they have big parts since Cage and Pena are mostly just lying motionless under tons of rubble. Cage is very good as always. He is a big reason why I went to see World Trade Center. The supporting cast is full of familiar faces, including Donna Murphy (Star Trek: Insurrection), Patti D'Arbanville (Real Genius), Stephen Dorff (Blade), Jude Ciccolella (24), Frank Whaley (Hoffa), Michael Shannon (Pearl Harbor), and William Mapother (Lost). But most of them have so much dirt and grime on their faces that you may not recognize them.

Whenever I saw the trailer for World Trade Center, I would get choked up as I do when I see anything from 9/11. But the film didn't really have that effect on me. The start of World Trade Center was emotional. It begins early in the morning on 9/11 and follows Will and John and the rest of New York city as they start their day. And the footage of the towers is always affecting. But the rest of the movie and the story of Will and John and their families plays like a TV movie of the week. The scenes underground are horrifying. I get a bit claustrophobic myself. But I was pretty unemotional about most of it.

World Trade Center is directed by Oliver Stone. That's right, "The" Oliver Stone. And, he does a good job. World Trade Center is a bit like Woody Allen's recent Match Point, which was the un-Woody Allen film. World Trade Center is the un-Oliver Stone movie. There are no conspiracy theories, which is amazing considering this is about 9/11, and no politics, which is amazing considering this is Oliver Stone. But Stone just sticks to the very simple storyline of the two cops and their families, and what they are going through above and below ground. In fact, I wish he had expanded it a little. The two mystery characters, the ex-Marine and the ex-paramedic are fascinating but we never find out who they are, why they are there and what their lives are like. There's a little about the ex-Marine but the ex-paramedic just beams down to the spot where Will and John are buried and we never know why or how he got there. But that's how I feel about the whole thing, about 9/11 in general. Ten or twenty years from now we may see some movies that try to tell us why. But not now.