The films of Pedro Almodóvar are eagerly awaited. He is the director of Women on the Verge of a Nervous Breakdown, Tie Me Up! Tie Me Down!, All About My Mother, Talk to Her, Bad Education, and now Volver. All of the other titles are english translations from the original spanish but Volver which means, To Return, is being marketed under its spanish title. I think Almodóvar is great. He has made a career out of films about women in distress. Volver (in Spanish with subtitles) is no different. It tells the story of a woman (Penelope Cruz) who is the mother of a teenage daughter (Yohana Cobo). They live unhappily with Cruz's boyfriend who seems to be more interested in the daughter than the mother. This leads to his sudden demise, and Cruz hides the body in the freezer of a friend's restaurant. The friend has left town so soon Cruz has reopened the restaurant and is running it herself. Meanwhile, her dead mother (Carmen Maura) seems to have returned to haunt the family. She starts appearing to Cruz's sister (Lola Dueñas) and daughter but they keep this news to themselves. I don't want to spoil the plot but the reappearance of Cruz's mother is linked to a mysterious fire in which she and Cruz's father died after which another family friend disappeared. 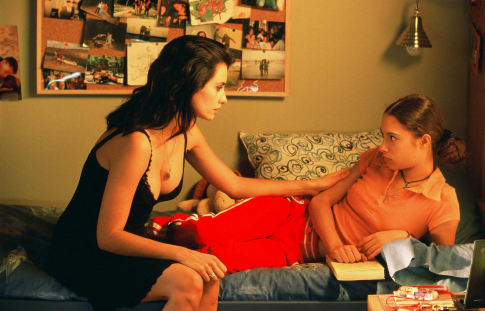 As can be seen in the picture above, Cruz is channeling her inner Sophia Loren in Volver. Despite all of the deaths in the storyline, Volver is a lighthearted romp. In most movies, the events surrounding the death of the boyfriend would have traumatized Cruz and her daughter, but in Volver, they just shrug their shoulders and get on with their new life where they have to deal with the reappearance of Cruz's dead mother. In this way, Volver is a lot like a 1930's madcap comedy. The films of Almodóvar are always on the surreal side. But Volver is a bit lighter than some of his other movies. The cast is very good. Cruz is better and more relaxed when she is in a spanish movie. Carmen Maura, who starred in Women on the Verge of a Nervous Breakdown, is great and the supposedly dead mother. Lola Dueñas (The Sea Inside) and Yohana Cobo round out the almost all-female cast nicely.

I really liked All About My Mother, which included Cruz's breakout performance as a pregnant nun, and Talk to Her which was about two women in a coma. But Almodóvar's last movie, Bad Education, left me cold. Volver is a fun likeable movie but I don't know if it is good enough for all the top-ten lists and awards from Cannes that it has garnered. If this were an american movie, it wouldn't be as surreal and fun but since it is Almodóvar, it's definitely worth seeing.