There Will Be Blood

The Oscar nominations came out this week. There Will Be Blood got a slew of nominations, including Best Picture, Best Director (Paul Thomas Anderson) and Best Actor (Daniel Day-Lewis). This new movie was "inspired" by the Upton Sinclair novel Oil! I say inspired because other than being about an oil tycoon and his son, the plot of There Will Be Blood bears little resemblance to the book. The movie follows the story of an oilman (Daniel Day-Lewis) who works his way up from an oil wildcatter to being a successful and very rich man. The story covers about thirty years starting about 1890 at the beginning of oil drilling in Texas. Day-Lewis adopts the infant son of his partner when the partner is killed while they are drilling for oil. The boy (Dillon Freasier) (see picture below left) becomes part of his pitch when Day-Lewis tries to buy out people whose land he wants to drill on. Day-Lewis' character is a tough old SOB who is willing to sell his own grandmother to get rich. As he says in the movie, he hates people and he wants to get rich so that he can get away from them. Day-Lewis sees his chance when he is visited by a young man (Paul Dano) who says that his family's ranch is rich in oil. Day-Lewis arrives to find that the young man is a crazy preacher (see picture below right) who wants to get rich as much as Day-Lewis does. Day-Lewis' drilling crew (Ciarán Hinds et al.) arrives and soon they strike a gusher, but Day-Lewis' son is too close when the well comes in. He is injured and becomes deaf for life. Day-Lewis has come to love the boy but he can't deal with his disability. And so the only human relationship that Day-Lewis has in his life is broken. He and the preacher are strangely drawn to each other maybe because they are both snake-oil salesman and recognize that in each other. But their relationship is tempestuous. Most of the action in There Will Be Blood takes place around the time of the big oil strike but there is a coda at the end, set many years later, when Day-Lewis is living in semi-retirement and his son is grown. 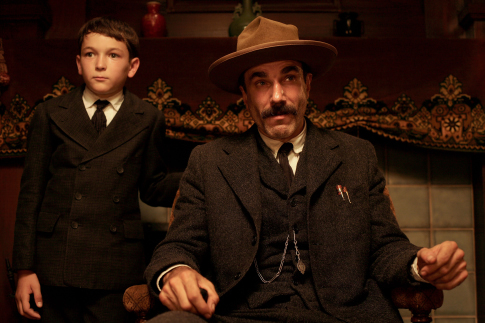 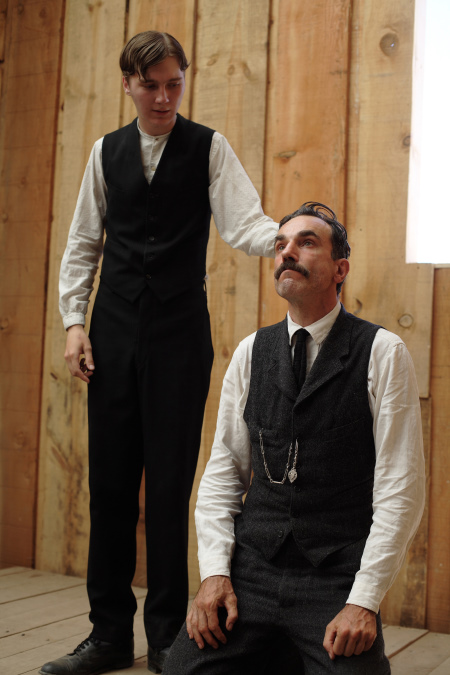 There Will Be Blood aspires to be an epic of the old school. And there are lots of shots of the wilds of Texas worthy of the big screen. Paul Thomas Anderson (Boogie Nights, Magnolia) wrote and directed. But this is a small movie. It is all about the hard, unforgiving life in Texas and its metaphor, Daniel Plainview played by Daniel Day-Lewis. This man is harder and more unforgiving than anything else around him. He is full of hate and bile for everyone and everything. He is a very unhappy man who drinks himself into a stupor every night. Besides Plainview, there are really only two other characters in the film, his son played by Dillon Freasier as a boy and then by Russell Harvard as a man, and Paul Dano as the young wild-eyed preacher. Other characters, including a badly wasted Ciarán Hinds who plays the closest thing to a friend that Day-Lewis has, come and go at Day-Lewis' whim. He is in almost every scene and he dominates this movie. Day-Lewis is amazing as always. As in all of his movies from My Left Foot to Last of the Mohicans to Gangs of New York, he becomes the character that he is playing.

There Will Be Blood is very intense. Daniel Day-Lewis reaches through the screen and grabs you over and over again. But I found this movie very unsatisfying. There is no evolution, no epiphany. Daniel Plainview is the same man in the first scene of the movie as he is in the last scene set 30 years later. Sure, his son grows up to be an ok guy despite his father, and Paul Dano's preacher doesn't. But this movie is all about Day-Lewis' character and that character is relentlessly the same in every scene. And I have to say that got a bit tired of Daniel Plainview. The coda at the end of the movie that is supposed to wrap things up, just reinforces the image of this nasty, unhappy man's life. I love Daniel Day-Lewis but I can't love this movie. I felt the same way about another of the Best Picture Nominees, No Country for Old Men. These are two cold and heartless movies. I much prefer the other three Best Picture nominees, Juno, Michael Clayton and Atonement. There's some real humanity in them.