Then She Found Me

There is a lot that is weird about Then She Found Me.Take a look at the pictures below. Yes, that is Salman Rushdie playing a gynecologist talking to a pregnant 39 year-old woman (Helen Hunt), her ex-husband (Matthew Broderick) and her boyfriend (Colin Firth). And yes, that is Bette Midler (playing her birth mother) kneeling before Hunt. The casting of this film is a bit idiosyncratic to say the least. Then She Found Me tells the story of woman (Hunt) whose life is turned upside down when her husband leaves her for another woman, her mother dies, her birth mother contacts her, she gets pregnant and she starts dating again, all within a couple of days. Nothing is easy for her, not the husband, not the baby, not the boyfriend, not the mother. Hunt is in a world of pain for most of this film until things kind of work out for the best at the end. 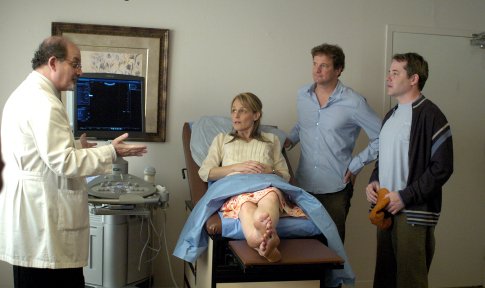 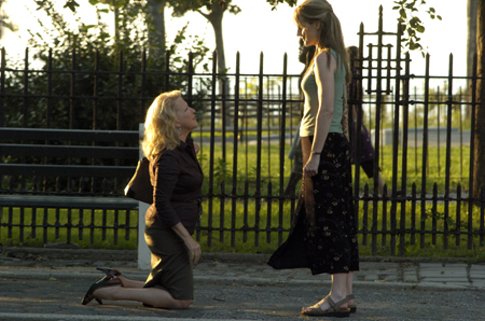 Then She Found Me is Helen Hunt's film. She directed it and helped to write the screenplay as well as playing the lead. She directed a few episodes of Mad About You but this is her first feature. I have to say that Then She Found Me is a bit of a mess. It starts and stops and doesn't flow very well, but it won me over eventually. This film is very brave with its characters. None of them, not even Hunt's character, are angels. Well, maybe Salman Rushdie's character is. But Broderick's character is a manchild with no impulse control, Firth has severe anger issues, and Midler is a congenital liar. Hunt is just a bit clueless and unbelievably still wants to have sex with Matthew Broderick when Colin Firth is available. Sometimes, even I cannot suspend my disbelief. Where was I? Oh ya, by the end of this movie, it actually gets a bit interesting. Broderick never gets beyond one dimensional with his character but Hunt, Firth, and Midler make their troubled characters into something that you care about. Helen Hunt (Twister, As Good as it Gets, Cast Away) is one of my favorite actresses and she has been mostly MIA for the last few years. It's good see her back in what is a good role for her. There are some very good scenes between Hunt and both Firth and Midler that are very well done. Hopefully, her next film will be more of an overall success.