It seems like the most important thing that a cilvilized country can provide for its people, rich and poor alike, is proper health care. And every first world country does just that, providing free medical care to all. Oops! Every first world country except one provides universal health care. I was reminded of how weird the United States is just this morning by this headline in the NY Times: A Battle Over Expansion of Children’s Insurance. The story details how President Bush is now leading efforts to block a major expansion of the program. That's right. The president of the richest country on Earth is fighting against providing free health care for poor children. Which brings me to Michael Moore. You may have heard that he has a new film out, and he has a great knack for dealing with the right topic at the right time, just as he did with Roger & Me, Bowling for Columbine, and of course, Fahrenheit 9/11. Michael Moore's new film, Sicko, is about health care or the lack of it in America. He starts by telling the stories of a few average Americans who don't have health coverage, including a guy who cut two of his fingers off with a table saw and had to decide which finger would be reattached since he couldn't afford both. After laying out the problems with the American system, Moore travels to Canada, England, France and finally Cuba to show the amazing fact that everyone in those countries has access to free high quality health care. He visits hospitals in England (below left) and Paris (below right) where he feigns disbelief at the concept of free health care. He runs around looking for someone to pay. In France, a group of American ex-pats extol their higher quality of life in France. None of them wants to move back to the States. Finally, Moore really rubs it in by taking a group of sick 9/11 first responders to Cuba so that they can receive proper medical care for free. As Moore points out, the people in all of these countries live longer and are healthier than Americans. 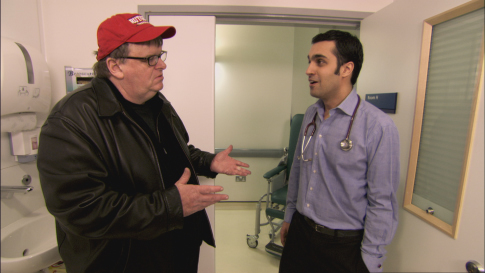 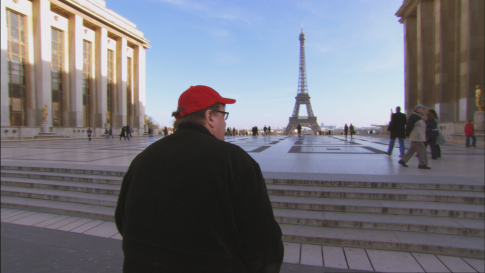 Sicko is very well done. Michael Moore is the past master at this sort of thing and he gets better with age. Sicko is so entertaining that that you almost forget that this is a message movie. Sicko is so smooth that you might not notice what Moore doesn't say. He dwells on the deficiencies of the American system, but he doesn't mention that there are any problems with the health care systems in Canada, England, France or Cuba. It's true that they provide free high quality health care, but each country is dealing with severe problems. In Canada, there are long waits for treatment. In France, the new President wants to dismantle parts of the social safety net. In Cuba, the health care system is under great pressure because it is no longer subsidized with billions of rubles from the Soviet Union. But the message of this film is so strong and timely that it cannot be ignored. The United States is out of step with the rest of the world is so many ways on gun control, capital punishment, etc, etc. Sicko illustrates the dark underbelly of the American dream. The emphasis on the good of the individual over the good of the group leads to the feeling that if someone is poor and can't afford health care, then it is somehow their fault and they should just pull up their socks. Once again, Michael Moore has lifted the veil of an American disgrace. Everyone should see this movie, and then write or call their members of congress and demand universal health care.