It seems like third time is lucky. Two weeks ago, Spider-Man 3 opened with a $151 million weekend. Now Shrek the Third has opened with $121 million. Next weekend, we get Pirates of the Caribbean: At World's End, the third installment of Captain Jack Sparrow. Who knows how much it will rake in. I liked Spidey 2 much more than Spidey 3 and I'm afraid I liked Shrek 2 much more than number 3. The franchise as well as its title character are getting a bit tired. This new film finds Shrek (Voice of Mike Myers) and his wife, Fiona (Cameron Diaz) at the bedside of her dying father, the King (John Cleese). His very drawn out dying words inform Shrek that he will have to be the new king unless he can find cousin Arthur (Justin Timberlake) and convince him to be King. So Shrek, Donkey (Eddie Murphy) and Puss 'N Boots (Antonio Banderas) head off in search of Arthur. Meanwhile, back in Far Far Away, Prince Charming (Rupert Everett) and a bunch of fairy-tale losers attack and take over the kingdom. Shrek and Arthur arrive back just in time to foil Prince Charming's plans with the help of Fiona, her mother (Julie Andrews), and her posse, shown below from left to right, Cinderella (Amy Sedaris), Snow White (Amy Poehler), Rapunzel (Maya Rudolph), Sleeping Beauty (Cheri Oteri). Also appearing is Merlin (Eric Idle), and of course the ugly stepsisters (Larry King & Regis Philbin). 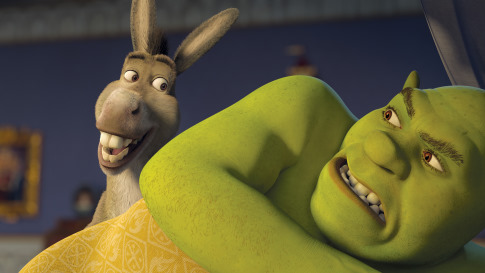 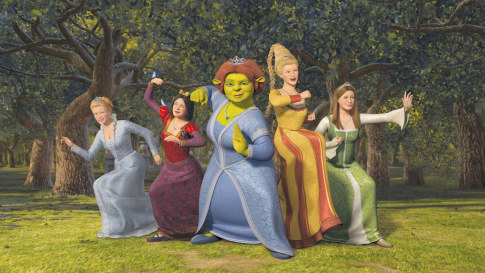 The Shrek series is much more watchable for adults than a lot of animated kiddie movies. It is more in the vein of The Simpsons, in that there are lots of gags that only the adults in the audience will get. In particular, Shrek deconstructs fairy tales in a very amusing way. A feature of Shrek 3 is the girl power shown by the gang of Fiona, her mother, Cinderella, Snow White, Rapunzel, and Sleeping Beauty, who turn out to be Ninjas except for Sleeping Beauty who has a problem with narcolepsy. This counterbalances somewhat the usual insidious fairy-tale gender bias. When Fiona's father, the King, dies, there is only talk of him being succeeded by Shrek or Arthur, not Fiona.

Unfortunately, Shrek himself and the third movie seem very tired. Shrek 2 was hilarious and introduced a lot of new funny stuff, but in Shrek 3, they just seem to be going through the motions, reworking the first two movies. Shrek 3 still has some funny bits. Doris, the ugly stepsister with larry King's voice is my favorite character. And Donkey and Puss 'N Boots still generate some laughs. With the money it is making at the box office, it's hard to believe that there won't be a Shrek 4, but with the ogre family settling down at the end of this movie, maybe it's time to call it quits.