Sex and the City

I wasn't the only man in the theatre. A few women had dragged their boyfriends along. But I was probably the only man in the theatre who had watched the whole TV series of Sex and the City. There aren't a lot of metrosexuals down here in the bayou. Even though I am a man, I am a lifelong single man with about 40 years of dating under my belt, so I have always felt a real bond with those single "girls", Carrie, Miranda, Charlotte and Samantha. Of course, when we last saw our intrepid heroines at the end of the series, Miranda (Cynthia Nixon) and Charlotte (Kristin Davis) were married, and Samantha (Kim Cattrall) was in a monogamous relationship. And Carrie (Sarah Jessica Parker) had just been rescued from Paris by the infamous Mr. Big (Chris Noth). 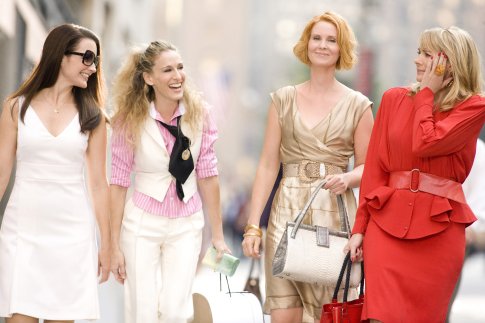 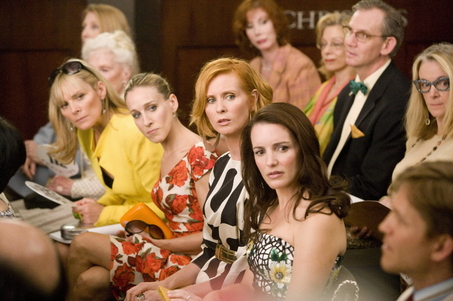 Four years have passed. I won't spoil the ending for you but I'll give you the setup. Miranda and Steve (David Eigenberg) are having marital problems and separate. Samantha isn't happy with just one man (Jason Lewis). But Charlotte, God bless her, is very happy with her husband (Evan Handler). Carrie and Big are living together also happily, until, in an irrational moment, they decide to get married. The editor of Vogue (Candice Bergen) offers to sponsor the wedding and it then spins out of control. Do Carrie and Big get married? Hmmmm. You'll have to see the movie. I will say that Carrie's gay BFF's Stanford (Willie Garson) and Anthony (Mario Cantone) are back, as is Magda (Lynn Cohen), the very scary nanny. The only new character of note is Carrie's assistant (Jennifer Hudson). Oh, and they order a few Cosmo's. 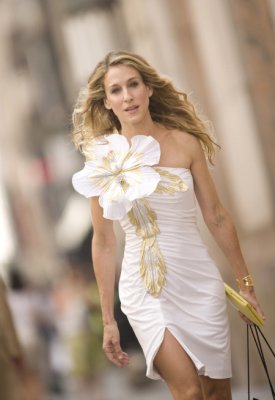 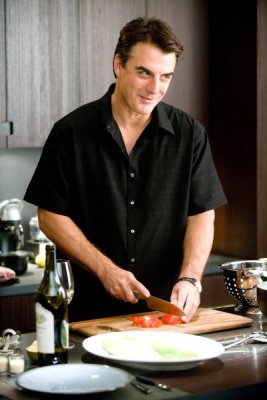 There's nothing special about Sex and the City the movie. It's just like Sex and the City the TV show, except that it is longer, much longer. It clocks in at a healthy 148 minutes. But it didn't feel long to me. It is directed by Michael Patrick King, who directed many episodes of the show, and it is written, of course, by Candace Bushnell. The script is good and they keep the story moving right along to its surprise (?) ending. But the fact that they didn't try and make it bigger and better and put in lots of special effects (other than Carrie's outfits) is one of the strongest things about Sex and the City. I was just happy to be along for the ride.

It was great to see the "girls", now all over 40, or in the case of Kim Cattrall, over 50. The movie is just like coming home and I got a little verklempt over and over again in the movie. I just love Carrie, Miranda, Charlotte and Samantha. Parker, Nixon, Davis and Cattrall all do a very good job of reprising their roles. While they aren't over 60 like Indiana Jones, they have done a similar job of evolving and adapting their characters to their advanced ages. They even make fun of the outfits that Carrie used to wear on the TV show. Of course, she wears some amazing new duds in the movie and she still loves Louis Vuitton, Manolo Blahnik and Jimmy Choo. Chris Noth, as Big, is still perfect as Carrie's incredibly handsome and incredibly unreliable boyfriend. He wins her heart anew by building her a huge walk-in closet. Jennifer Hudson (Dreamgirls) is good as Carrie's efficient assistant, and it was nice to see Candice Bergen although her role is very small. My biggest disappointment was that Willie Garson, as Stanford Blatch, is also given a very small role. He is in a lot of scenes but doesn't get to do much. 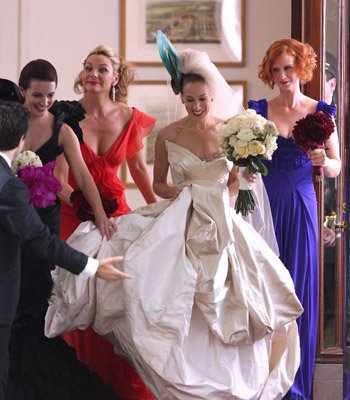