What if there were a real-life family that was like the family in The Royal Tenenbaums (pictured below left)? Meet the Finch family as portrayed by actors in the new film, Running With Scissors (below right). These families have more in common than just Gwyneth Paltrow. But more on that later. 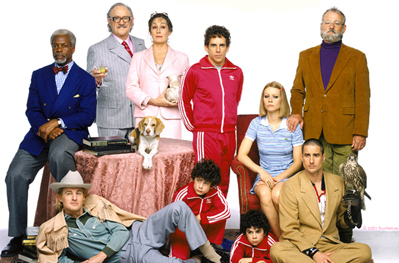 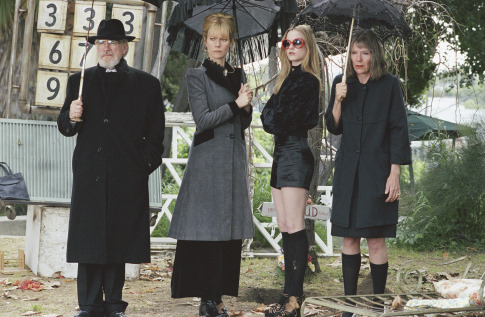 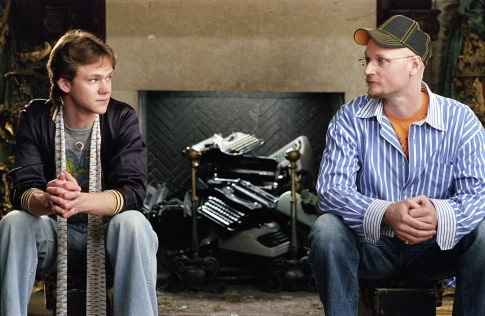 So I guess you are getting the idea. Augusten Burroughs is a real person. His mother, played by Annette Bening in the movie, has some mental health issues. She is in a very unhappy marriage. Her husband (Alec Baldwin) is an alcoholic and neglects Augusten. Unfortunately, Augusten's mother goes to see a shrink, Dr. Finch (Brian Cox) who is loonier than she is, and soon he has her so doped up on various meds, that she becomes more and more dysfunctional. First, Augusten's dad moves out, then his mother signs papers allowing Dr. Finch to adopt Augusten. The mother then has a series of affairs with women (Kristin Chenoweth, Gabrielle Union) as she enters a classic death spiral. Meanwhile, Augusten is stuck living with the real-life The Royal Tenenbaums in a house, where nothing is ever cleaned or thrown out. Besides the looney shrink, there is his unhappy drudge of a wife (Jill Clayburgh), and their two daughters (Evan Rachel Wood & Gwyneth Paltrow). Paltrow's character is her father's daughter, i.e., she's a loon too. Wood's character is as normal as a teenage girl in a house of loonies can be, and she befriends Augusten. But Augusten is gay and looks to another Finch adoptee (Joseph Fiennes) for solace. Unfortunately for Augusten, Fiennes is a schizophrenic. It's not just Bening's character who is in trouble. Basically, everyone in this movie is spirally down. The question is whether anyone , Augusten, in particular, can escape or whether they will all crash and burn.

The cast is awfully good. I haven't seen Joseph Cross, who plays Augusten, before. He is very good as the teen with the hellish life. The supporting cast, as Borat would say, "is niiice. It's a bit scary how well and easily Annette Bening plays characters like this. She has three previous Oscar nominations (The Grifters, American Beauty, Being Julia) and could easily get another one here. Bening does an amazing job of making her character have three unsympathetic dimensions. Brian Cox is usually seen making the most of small character roles like the bad CIA boss in the Bourne Supremacy. But, in Running With Scissors, he gets to shine in a leading role. This is a rare movie appearance for both Jill Clayburgh and Joseph Fiennes. She's mostly on TV these days and he's mostly on stage. They are both good here. Fiennes is reunited here with Paltrow, his Shakespeare in Love. And Evan Rachel Wood (Thirteen) shows again that she can really act. She's been acting for 12 years even though she is only 19.

The Royal Tenenbaums is what we would call a black comedy. But that works because, at the end of the day, it's just a work of fiction. Running With Scissors would be a black comedy if it were fiction. But, I found it more than a bit creepy due to the fact that it's a true story. The characters who would have been funny come off as sad or scary. The movie was written and directed by Ryan Murphy from the book by Augusten Burroughs. I guess you can tell it's a true story. In The Royal Tenenbaums, t hey never would have shown a 15 year-old boy having sex with a 35 year-old gay schizo. It's really not that funny. Running With Scissors is good, but it's a bit too painful to be really enjoyable.