Plus ça change, plus c'est la même chose. Believe it or not, it has been 30 years since Rocky came out, won the Oscar for Best Picture, and became one of the enduring icons of the movies. It was followed by 4 sequels which ran down the "brand" somewhat. But Rocky has endured and now he's back, 30 years older, but still the same Rocky. It's good to see him. As shown below, Syslvester Stalone as Rocky Balboa hasn't changed his "look" from 1976 (left picture) to 2006 (right picture with his son, Rocky Jr). 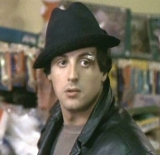 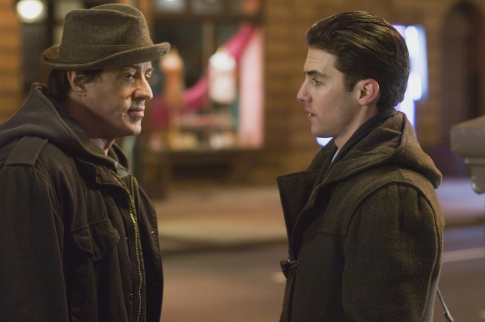 As we pick up Rocky's story, he has been retired from boxing for many years. But he is still so famous in Philly that everyone yells "Hey Rock" when they see him on the street. He runs a small restaurant and still lives in the same part of town. His wife, Adrian, has recently died of cancer and he spends alot of time at the cemetery. He has a friendly but distant relationship with his son, Rocky Jr. (Milo Ventimiglia), who is a bit embarrassed at being Rocky's son. Rocky is lonely but he still hangs out with his brother-in-law Paulie (Burt Young). He befriends a woman (Geraldine Hughes) and her son (James Francis Kelly III), and she come to work at the restaurant. Rocky misses boxing and has the urge to start working out again. Meanwhile, ESPN shows a computer simulated fight between Rocky and the present heavyweight champion (Antonio Tarver). Rocky wins the fight which sets in motion as series of events leading to a public relations event where Rocky and Tarver fight in Las Vegas. It's just supposed to be a friendly match but you know it's not going to be friendly! 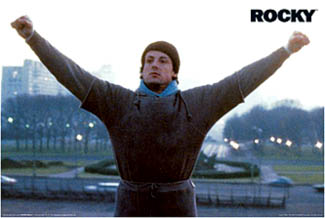 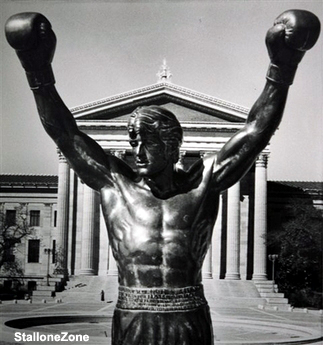 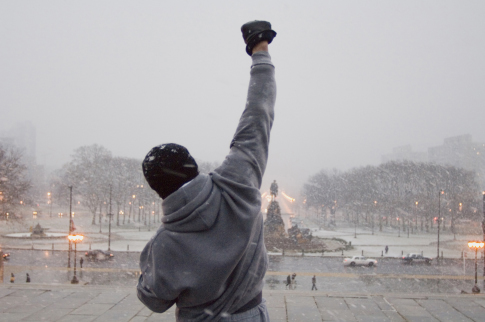 I wasn't the only one enjoying the return of Rocky Balboa. When Rocky decides to start training again, eating raw eggs, punching sides of beef, and most importantly, running up the steps of the Philadelphia Art Museum, and the music starts up, the crowd in the theatre started applauding! The pictures above show him at the top of the steps in 1976 (left) and 2006 (right). The picture in the middle shows the controversial statue of Rocky that was placed in front of the Art Museum and then, after protests from "art lovers", hidden in a storage room for many years until being returned to its rightful place this fall.

I wanted to see Rocky Balboa but I didn't expect to like it this much. It is a sweet, sweet movie, and I have to say, it's the feel-good movie of the year. It is written and directed by Stallone, who shows that, at least with this one character, he is a genius. The great thing about this movie is that it's about Rocky dealing with being 60 years old, and not about trying to bring back the Rocky of 30 years ago. He is a truly likable character and you want to root for him. And even though the whole idea of him being able to fight a 20-something heavyweight champion of the world is ludicrous, who cares! Even though Adrian is gone and Mickey (Burgess Meredith) is gone, there is some continuity provided by the ageless Paulie, and Duke (Tony Burton) who has played Rocky's corner man in all six movies! The addition of Geraldine Hughes to give Rocky someone to talk to, works very well. She is really great in this role, and again they don't spoil it by having any romantic interest between them. I was disappointed that there was no Adrian in Rocky Balboa, but Rocky does get to say, "Yo Adrian" at the end of the movie.

Rocky Balboa is a great example of the meta-life that we lead now where reality and fantasy merge. In the movie, Rocky is the most famous person in Philadelphia, just like in real life, his movie character is just about the most famous person there. During the closing credits, they show scenes of all sorts of people running up the steps of the Philadelphia Museum of Art and dancing around at the top. In the movie, the fight in Las Vegas is broadcast on HBO with the real HBO announcers. They even have a real boxer, the former light heavyweight champion, Antonio Tarver, play Rocky's opponent. And Mike Tyson has a cameo. That may be his last role for a while since he's in the slammer again. I think Rocky is real.

But like I said, Rocky Balboa is just a sweet movie. It makes you feel good just to watch Rocky resist fading away. As Rocky says to to Tarver, using Yogi Berra's 1950's classic quote, "It ain't over till it's over." To which Tarver says, "What's that from the 80's?" "No," says Rocky, It's probably from the 70's." Just click below and listen to the Rocky theme, then run up those steps and see the movie.