I really love Rushmore. As you know, I like the quirky comedies, the quirkier the better. And Rushmore was the quirkiest. Its hero who was so weird even for high school, that no one knew what to make of him. But he eventually triumphs and wins everyone over. It is a triumph of the heart. That is the thing that makes his character real, even though he is so weird. And Bill Murray helped, a lot. Rushmore was where Bill Murray's career was reborn, leading to Lost in Translation and Broken Flowers. Rocket Science is somewhat similar to Rushmore, having a central character who is weird but somehow lovable. The setting as with so many comedies including Rushmore is high school. So many of us didn't fit in at high school, that it is easy to identify with the misfit protagonists of these films from Napoleon Dynamite to Superbad. But although Rocket Science has some of the feel of Rushmore, it also reminded me of Election. 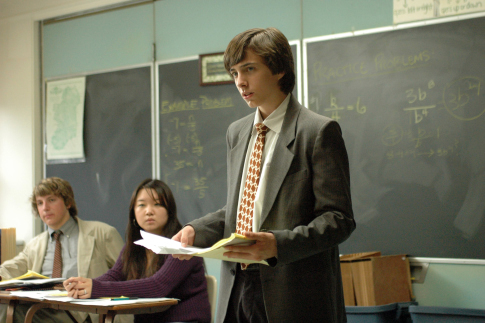 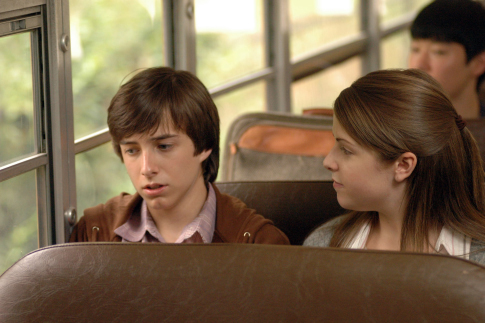 Rocket Science has nothing to do with rocket science and the phrase is only mentioned once, almost, by its stuttering hero (Reece Thompson). He is so hobbled by his affliction that it affects every aspect of his life. It comes to a head every day in the cafeteria lunch line when he orders fish because he can't say the word, "pizza." He has a dysfunctional family, typical of these quirky movies. Think Little Miss Sunshine. His parents have recently split up, and his mother (Lisbeth Bartlett) is dating a Korean-American man from next door. His brother (Vincent Piazza) is a sociopathic kleptomaniac. Reece has few friends and never talks to a girl until the star of the school's debating team (Anna Kendrick) approaches him on the bus one day and asks him to join the team. This is the central comedy element of Rocket Science, a guy who can't say a complete sentence trying to be a debater. Reece has the mind of a debater but he can't even get the proposition out before his time is up so he ends up hiding most days in the Janitor's closet at school. Kendrick has soon left to debate for a competing school leaving Reece lovesick and stuttering worse than ever. In desperation, he goes looking for a fabled debater (Nicholas D'Agosto) who quit in the middle of a debate the previous year and is now working at a dry cleaner in Trenton. They form a debating team, solving Reece's stuttering hilariously by having him sing his arguments to the tune of The Battle Hymn of the Republic. (BTW, there really is a bridge in Trenton with a big sign that lights up and says, "Trenton Makes, the World Takes.")

Rocket Science is a big departure for the director, Jeffrey Blitz. His only other film is Spellbound, the fascinating documentary about Spelling Bee's. Rocket Science's star, Reece Thompson, is perfect for the role and you gotta love him. The supporting cast is good, but Anna Kendrick and Nicholas D'Agosto stand out as the uber-debaters. They are the opposite of Reece, articulate yet heartless. Their characters are like the students running for president in Election. Anna Kendrick's character in Rocket Science reminds me of Reese Witherspoon's in Election. (D'Agosto actually has a small role in Election). Kendrick is a newcomer to films but has already been nominated for a Tony for her role in High Society on Broadway.

Rocket Science is playing on a few screens around the country but it doesn't seem to be taking off like Little Miss Sunshine did last year. Try and see Rocket Science if it opens where you are. It has none of the frenetic complexity of Rushmore nor the edginess of Election. It is simpler, calmer, quieter. It's more like real life, not so much a parody. And I really liked the ending. Reece doesn't get the girl or win the debating tournament, but by the end of the movie, he's getting better at dealing with life and ordering pizza.