Prince Caspian, the second installment of the Narnia movie series, originally written by C.S. Lewis, has opened in the theatres. As far as the four Pevensie children are concerned, only one year has passed since they returned from Narnia at the end of The Lion, the Witch and the Wardrobe. We don't get much of an idea how the High Kings and Queens of Narnia, i.e., the Pevensie kids, have adapted to life back in wartime London, because after about two minutes, they are whisked back to Narnia from an Underground platform. They slowly realize that the ruins they find are all that remains of the palace they lived in while they were reigning over Narnia. In fact, 1300 years have gone by since the Pevensies were last in Narnia and they haven't been good ones for the cute talking animals, centaurs, minotaurs, and dwarfs. Narnia is ruled by some bad humans led by King Miraz (Sergio Castellitto) and the Narnians have been hunted to near extinction. That brings us to Prince Caspian (Ben Barnes) who is the rightful heir to the throne, which has been usurped by Miraz. Caspian escapes into the forest where he is befriended by two dwarfs (Peter Dinklage & Warwick Davis) and a talking badger. He blows a horn that Susan Pevensie (Anna Popplewell) left behind in Narnia and this somehow calls the Pevensies, Peter (William Moseley), Edmund (Skandar Keynes) and Lucy (Georgie Henley) as well as Susan bask to Narnia. To make a long (very long) story short, the kids, i.e. the High Kings and Queens, make their torturous way to find Prince Caspian and his ragtag forces, who are trying to fight the much larger, better equipped, but very stupid army of King Miraz. All seems lost but Lucy believes that Aslan will show up to save the day. He has been MIA for 1300 years also. Apparently, Aslan is an old-testament style god and he has been testing the people. Anyway, all's well that ends well, and soon (well not soon enough) the Pevensies are back where they started on the Underground platform. 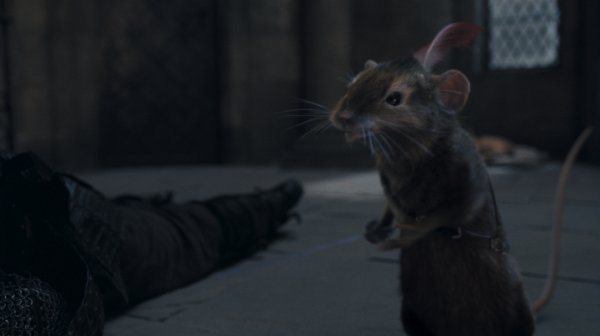 I don't think that my innate bias against C.S. Lewis and for J.R.R. Tolkien is affecting this review but there you go. Prince Caspian is 144 minutes long and feels every minute that long. I'm sure some of my friends would describe the LOTR trilogy this way. Prince Caspian has a few battle scenes which punctuate excruciatingly long periods where not much is happening. The Pevensies take forever to find Prince Caspian, and then another very long period passes while they are preparing for battle. You get the idea. Not even a brief appearance by the White Witch (Tilda Swinton), can liven things up. The "climax" of Prince Caspian is a seemingly endless fight to the death between King Miraz and High King Peter, while Lucy is off trying to find Aslan. But then, the whole story is about faith or the lack thereof, and only Lucy has enough faith to bring Aslan back. One of the few funny moment of Prince Caspian comes when Peter Dinklage's skeptical dwarf gets a signature Aslan roar in his face. To which Lucy says, "Now do you see him?" 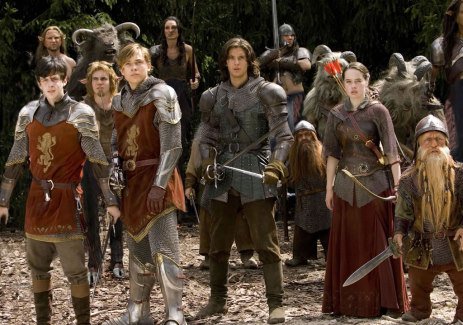 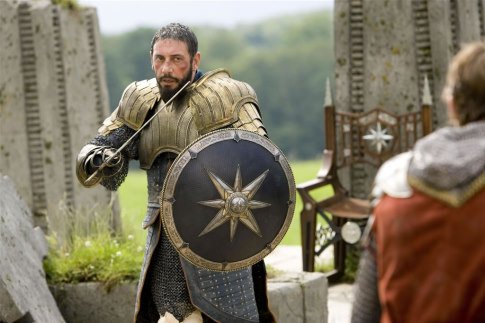 The Lion, the Witch and the Wardrobe benefited greatly from having an interesting baddie, the White Witch, and also Mr. Tumnus (James McAvoy). The only thing left to care about in Prince Caspian is Lucy. The rest of the kids are ok, but Georgie Henley as Lucy rocks. She makes Prince Caspian almost watchable. Otherwise, not so much. Even the battle scenes are a bit boring except that Miraz's army has some cool trebuchets. Ben Barnes is OK in the title role. And he is definitely a hottie. He speaks with a weird Italian-like accent, perhaps to match Sergio Castellitto (King Miraz) who actually is Italian. The only other interesting character is a swashbuckling mouse (voiced by Eddie Izzard), who is a total rip off of Puss In Boots from Shrek 2. I really hate the talking animals, especially the badger. They are impossible to take seriously.

The Lion, the Witch and the Wardrobe was not the greatest movie, but it was infinitely better than Prince Caspian which is very flat and lifeless. I guess you can probably tell that I didn't like Prince Caspian much. Don't spoil your long weekend. If you have a choice, go see Indiana Jones and the Kingdom of the Crystal Skull.