(Spoiler Alert: I don't give away the endings but I do discuss the basic plot points and early scenes which, of course, give away some things.)

It's weird when two very similar movies come out at once. It happens every once in a while, like Deep Impact and Armageddon, or Tombstone and Wyatt Earp, or Capote and Infamous. This year, there are all these movies coming out about magicians. First, there was Scoop with Woody Allen as 'The Great Splendini'. This was followed by The Illusionist with Edward Norton as 'Eisenheim the Illusionist', and The Prestige with Hugh Jackman and Christian Bale as dueling magicians, 'The Professor' and 'The Great Danton'. 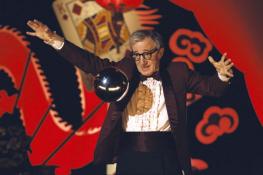 Ok, as you can see from the pictures above, Scoop isn't really like The Prestige and The Illusionist. You can read my review of it here. But the other two films are both about magicians in the late 19th century whose tricks are so compelling, even to other magicians, that the audiences begin to believe that they may have actual magic powers. I will now give a short plot summaries for these two films, giving away as little as possible. Both of these films are structured like a magic trick themselves. As explained in The Prestige, the three parts of a magic trick are, The Pledge, where the audience is presented with some everyday object; The Turn, where the object disappears; and The Prestige, where the object magically reappears. So, the climaxes of both The Illusionist and The Prestige involve tricking the audiences in the movie theatre as well as those in the movies themselves.

The Illusionist follows the classic plotline of two young people who fall in love but are forbidden to be together because one is rich and one is poor. In this case, the two meet as children. She (Jessica Biel) is from the big house and grows up to be a princess engaged to the Crown Prince (Rufus Sewell) in fin de siècle Vienna. He (Edward Norton) is lowly born and becomes a famous magician. Needless to say, they meet again as adults and are still in love. But it seems that they can never be together. And that's where the magic comes in. But before the exciting climax, Norton comes to the notice of the Crown Prince, first because of his stage show, where he is wowing the audiences of Vienna, and then because he starts seeing the princess on the sly. In the middle of all this, is the Chief Inspector of the Police (Paul Giamatti) who is given the job of watching Norton and arresting him if necessary. He is a nice guy who just wants to lead a quiet life but soon he has to decide whose side he is on.

The Prestige is the story of two young men (Christian Bale & Hugh Jackman) in fin de siècle London, who are apprentices to an older magician (Ricky Jay) and his manager (Michael Caine) who also comes up with the magic tricks. Jackman is married to the magician's lovely assistant (Piper Perabo). But it all falls apart when Bale ties the wrong knot around Perabo's wrists and she drowns. This leads to a life-long blood feud between Bale and Jackman. They go their separate ways, trying to make their livings as magicians. But they keep showing up at each other's shows, alternately trying to figure out each other's tricks, and trying to kill and maim each other. Michael Caine goes with Jackman and they find a new lovely magician's assistant (Scarlet Johansson). Strangely, both Jackman and Johansson were also in Scoop, the third magic movie of the year. Bale marries a lovely woman (Rebecca Hall) who is not his stage assistant. And he has a mysterious partner who is not nearly as friendly as Michael Caine. I can't tell you any more without giving away too much of the complex plot of The Prestige, except to mention one bizarre subplot where Jackman travels to Colorado Springs, CO to convince Nikola Tesla (David Bowie) and his trusty assistant (Andy Serkis) to construct an elaborate magic device.

The casts of both films are very good. The characters of The Prestige are at least three dimensional, maybe more. You may need String Theory to explain it all. But Bale, Jackman and Caine are all very interesting, fully-formed characters. Michael Caine, in particular, never ceases to amaze. The rest of the cast pales a bit, but Johansson does well, as usual, in a key but minor role, although she disappears from the story just as things are getting interesting. Hall is very good as Bale's wife and Roger Rees (Nicholas Nickleby) shows up but I can't tell you why. And, it was fun to see David Bowie as Tesla. Andy Serkis, famous as Gollum and King Kong, gets to do role where you can actually see his face. In The Illusionist, only Norton and Giamatti make their characters really interesting. They are both fab. Jessica Biel does the best she can playing a one-dimensional princess, and Rufus Sewell (A Knight's Tale) does another turn as a one-dimensional bad prince. By the way, there is one real magician, Ricky Jay who appears early in The Prestige.

The Illusionist and The Prestige are very different movies, but I really liked both of them. On big difference is in the nature of their plotlines. The Illusionist is a love story, pure and simple, with two star-crossed lovers (Norton and Biel), an evil bad guy who wants to kill the hero and take the girl, and Giamatti, who plays what he plays so well, the ambivalent guy in the middle who must decide if he is willing to sacrifice himself to aid the cause of true love. The Prestige, on the other hand, is a very complicated story about two men (Bale & Jackman), so obsessed with destroying each other, that they don't care who gets in the way, including the loves of their lives (Perabo, Hall & Johansson). The Illusionist, directed by Neil Burger, despite its tricky ending is a much more straightforward story, while The Prestige is a riddle, wrapped in a mystery, inside an enigma. The layers in The Prestige are amazing. It is directed by Christopher Nolan who also wrote the script with his brother. They are also responsible for Batman Begins (also with Bale and Caine) and Memento. The Prestige is in the mold of Memento in that you really have to keep your wits about you to follow the story. I already mentioned that the movie is structured like a magic trick. But there is also a horrible symmetry about what happens to the main characters as a kind of karmic punishment for their obsessions and what it has cost the people near to them. But this film, complex as it is, is amazingly well put together and has great internal consistency, even though, of course, it makes no sense really. I like The Illusionist. It's a nice little movie. But I have to say that The Prestige really blew me away.