Pirates of the Caribbean: At World's End

The first film, Pirates of the Caribbean: The Curse of the Black Pearl, grossed $653 million worldwide. The second film, Pirates of the Caribbean: Dead Man's Chest, grossed over $1 Billion. Heaven knows what number three, Pirates of the Caribbean: At World's End, will gross. Lest we forget, this juggernaut of a trilogy started as a ride at Disney World. Since then, it has introduced us to a new iconic character, Jack Sparrow, I mean, Captain Jack Sparrow. The first Pirates film in the series was all about Johnny Depp playing this very enjoyable and amusing character. The second Pirates film fell into the trap of most sequels, The Matrix Reloaded comes to mind, where the director tries to do everything bigger, much bigger. Why fight one Agent Smith when you can fight a hundred? Anyway, Pirates 2 brought us Captain Jack Sparrow fighting and mugging his way across a tropical island on a rolling ferris wheel. The movie was still entertaining but it felt long, very long, and it didn't advance the plotline very much except to introduce the key villain who must be defeated, Davy Jones (Bill Nighy), and to bring back to life Sparrow's fellow pirate, Captain Barbossa (Geoffrey Rush). 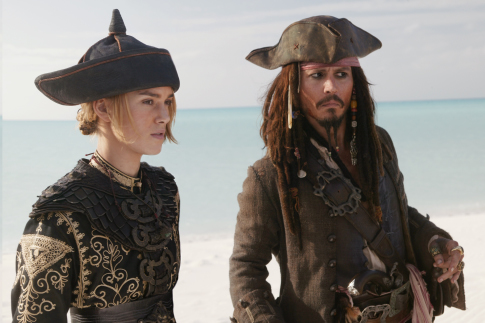 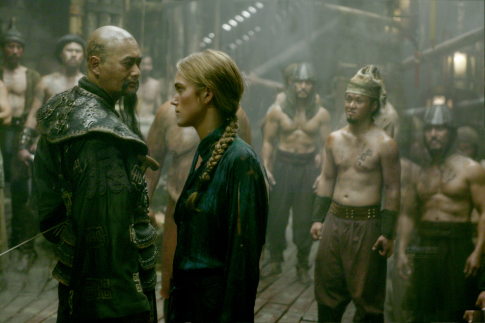 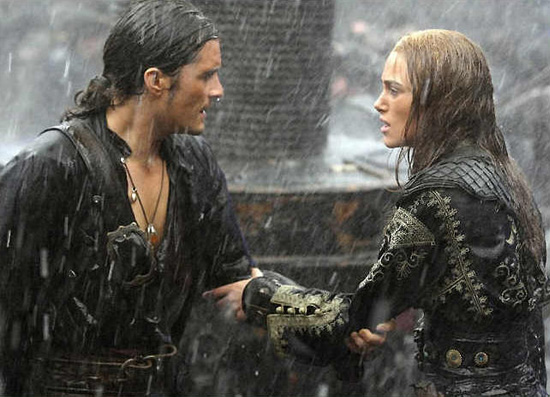 Pirates of the Caribbean: At World's End is still big, very big. It had an astronomical budget and the special effects to go with it. And clocking in at amazing 2 hours and 48 minutes, they had a lot of time to fill. There's no Kraken this time, thank god. It is found dead, washed up on a beach. This time, the special effects aren't just there to fill up the screen; they actually fit into the plot, and although the movie is too long, it doesn't drag because you feel like the movie is going somewhere, somewhere you'd like to follow it. All the double and triple crosses in the plot are a bit hard to follow, but these are pirates so don't sweat it. Will Turner even double crosses Swann, the love of his life, to try and save his father (Stellan Skarsgård) who is trapped as part of Davy Jones' crew. The other characters from Pirates 1 & 2 are back although some like Swann's father (Jonathan Pryce) and ex-boyfriend (Jack Davenport) appear but briefly. The tiny, evil Lord Beckett (Tom Hollander) is back and has teamed up with Davy Jones to wipe out the pirates completely. The nine lords of the pirates, including Chow Yun Fat, team up to fight Beckett and Jones with the help of their voodoo priestess (Naomie Harris). And of course, the various crew members of the Black Pearl are back to mug mercilessly for the camera. Although, I have to say that this time, the fake eye actually has a purpose.

Another thing that happened in Pirates 2, was the evolution of the character of Elizabeth Swann (Keira Knightley). Released from her small role of "damsel in distress" in the first movie, she became more of a pirate than anyone other than Sparrow, culminating when she kills him. But, as you know, just dying doesn't stop anyone in Pirates of the Caribbean. This evolution of Swann's character continues in Pirates 3 to the point where she, not Sparrow, is the main character and star of the movie. Pirates of the Caribbean: At World's End is the story of Elizabeth Swann, I mean, Captain Elizabeth Swann. As pictured above, Knightley, as Swann, is involved in nearly every subplot of the movie, including her still unconsummated love for Will Turner (Orlando Bloom). The roles of Davy Jones and Barbossa have also been enlarged. Weirdly, the loser in all this is Johnny Depp as Captain Jack Sparrow. In Pirates of the Caribbean: At World's End, Jack Sparrow is rarely at the center of the action. He waltzes in and out from time to time to do some of his amusing shtick, but he isn't heavily involved in most of the subplots. It's a bit weird that Depp's part is so small. I wasn't kidding about the Captain Elizabeth Swann thing.

The bottom line is that despite the length, I liked Pirates of the Caribbean: At World's End much better than Pirates 2. Ok, I like Keira Knightley, so I didn't mind the screen time she gets. See her in Pride & Prejudice. She rocks as Elizabeth Bennet. But mostly, I think that spreading out the action among the various characters in Pirates 3 works pretty well. In addition to Knightley, Rush and Nighy are both great as the pirate captains. I just love the way that Davy Jones says, "Captain Jack Sparrow." Orlando Bloom continues to be stolid and flat as Will Turner but he's ok. And Johnny Depp is great as always. After all the hullabaloo about Keith Richards appearing as Sparrow's father, it's a bit of a letdown. Weirdly, he isn't portrayed as an older Jack Sparrow. You wouldn't even recognize that he was Keith Richards, if you didn't know ahead of time. Finally, be sure to stick around at the end of the movie. You must wait ten minutes (it only seems like 10 years) to the end of the credits to see the final wrap-up scene. And when I say, "wrap-up" don't worry. The door is wide open for further sequels after Pirates of the Caribbean: At World's End makes billions and billions. But go see this one. Just remember to go to the bathroom before it starts.