Judd Apatow and Seth Rogen are a runaway train of comedy movies for and about teens, twenty-somethings, and even one 40 Year Old Virgin. Along with that film, Apatow and Rogen are responsible for Superbad, Knocked Up and now Pineapple Express. This comedy team got together on Freaks and Geeks where Apatow was a writer, and a young Rogen showed up for a cattle-call audition and got a part. But I'm not one of the converted. I can admire their success but I'm not wild about their movies. But, I liked Superbad a lot. Even though it was a classic teen comedy, there was just something about the geeky characters played by Jonah Hill, Michael Cera (the boyfriend in Juno) and Christopher Mintz-Plasse who will forever be known as McLovin. The other Apatow/Rogen movies haven't been favorites of mine, so it was with some trepidation that I approached Pineapple Express which wants to be a big screen action movie as well as being a classic stoner comedy. 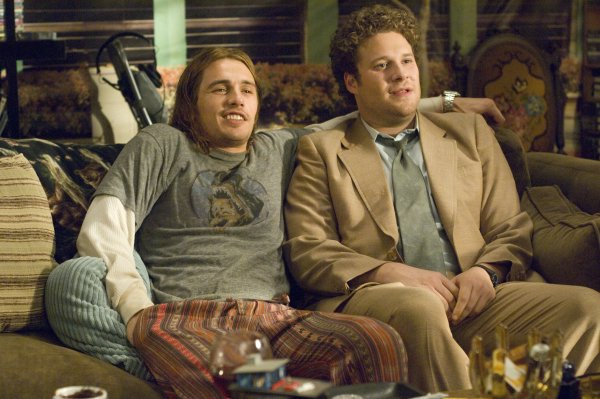 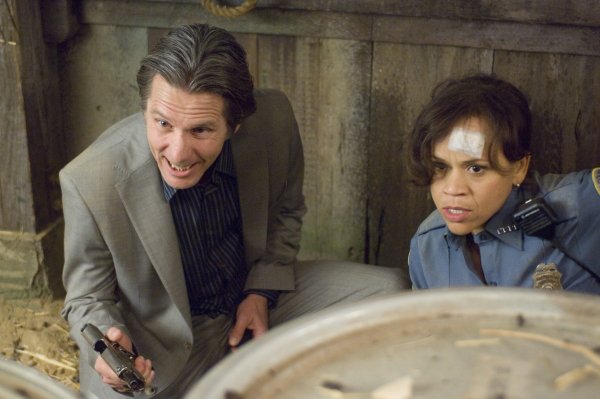 Pineapple Express tells the story of a Process Server (Rogen) who gets through the day with the help of a lot of tokes. The two most important people in his life are his high-school girlfriend (Amber Heard) and his dope dealer (James Franco, another Freaks and Geeks alumnus). OK, his girlfriend isn't that important. One night, while trying to serve a subpoena on a drug lord (Gary Cole), Rogen witnesses Cole and his girlfriend/dirty cop (Rosie Perez) killing a rival drug boss. Rogen drops a roach at the scene of the crime and Cole recognizes it as "pineapple express" a new potent kind of marijuana that his organization sells. Soon he has sent his hit men (Kevin Corrigan & Craig Robinson) to look for Rogen. They go down the distribution chain to the chief drug seller, Red (Danny R. McBride), and then to Franco. Rogen has already run to Franco for help, since your drug connection is your best friend. Anyway, soon Rogen and Franco are being chased all over town by the bad guys setting up a dénouement when everyone gets a hold of some very big guns. As you can see from the pictures, that everyone, especially Red (Danny McBride) takes a beating. 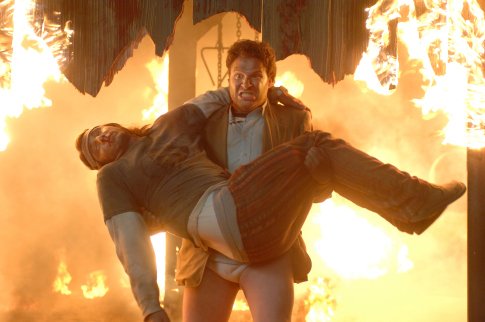 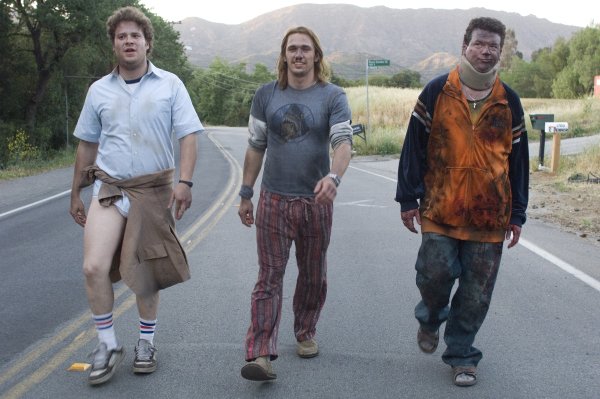 While Pineapple Express was written by the team of Apatow/Rogen, it was directed by David Gordon Green who wrote and directed All the Real Girls, a nice little indie film s well as two other forgettable movies (Snow Angels and Undertow. Green's three previous movies have grossed less than a million dollars collectively. Pineapple Express grossed more than six times that on the first day. Anyway, the point I was trying to make is that this movie is a departure for Green. Pineapple Express isn't exactly bad but I could have directed it by watching Animal House forty times and copying the shots. There are some funny moments in Pineapple Express, mostly supplied by James Franco, who has undergone an amazing transition from the surly Green Goblin Jr. in Spiderman to the what-me-worry drug dealer in Pineapple Express. Franco's joie de vivre keeps the movie going when it starts to drag severely in the middle. Rogen is good but he plays the same befuddled laid-back character that he always plays. This works well when he is playing the sidekick but not so well when he is the lead. It drove me crazy in Knocked Up that Katherine Heigl was supposed to think that Rogen's idiot child-man was in any way attractive. The rest of the cast is OK. Danny McBride is mildly amusing as the drug dealer who won't die. I hope that Gary Cole and Rosie Perez had nice paydays. They certainly could do their parts in their sleep. Watch for a nice cameo by Ed Begley Jr. and Nora Dunn as the parents of Rogen's teenage girlfriend.

Rogen and Franco are trying to be the Cheech and Chong of the 21st century. I think that Franco is much more successful than Rogen at getting this right. Franco plays his part with wild abandon and a happy smile on his face. Rogen is a little too serious. The transition from stoner comedy to pseudo-action/thriller in the middle of Pineapple Express is a bit jarring. There is a running joke where Red is repeatedly shot, tortured, and blown up, but keeps coming back for more. And when one of the bad guys gets crushed by a flying car, there was a huge laugh from the crowd. I guess maybe it's just me but seeing people get shot, tortured, and blown up isn't that funny. Of course, I'm not the target audience. But I have to say that my 81-year-old father quite enjoyed the movie. We were definitely the two oldest people in the theatre.