You can't graduate from grifter finishing school if you don't the know the definitions of these terms: a Billy Martin, a Susan B. Anthony, the Gilroy, a Cartwheel, a Reverse Big Store, and an Irwin Allen. I just went through the equivalent of grifter school, e.g., Ocean's Thirteen and I'm still guessing what half of them mean. Here's the deal. Danny Ocean's mentor and bankroller (Elliot Gould) is screwed over in a business deal to build the newest, glitziest casino in Vegas. His partner in the deal (Al Pacino) cuts him out and leaves him suffering a heart attack. To revenge this injustice, our intrepid Ocean's Eleven boys (George Clooney, Brad Pitt, Matt Damon et al.) spring back into action minus the girls (Julia Roberts and Catherine Zeta Jones are MIA because "it's not their fight."). There is one new girl (Ellen Barkin) who is Pacino's right-hand woman. The plot is anything but clear. After Pacino rejects their Billy Martin (a second chance), they decide to run a Reverse Big Store (rigging all the games) combined with an Irwin Allen (a fake disaster) to make Pacino lose money on the casino. This involves running a Susan B. Anthony (leaving coins behind on the slot machines). When things go wrong, Damon has to use the Gilroy (strong pheromones) on Barkin, and a couple of hookers have to do a Cartwheel (you can guess this one). The boys even bring in their old nemesis (Andy Garcia) and an ultracool tech (Eddie Izzard) to help. And the French thief (Vincent Cassel), who they matched wits with in Ocean's Twelve, is lurking again. 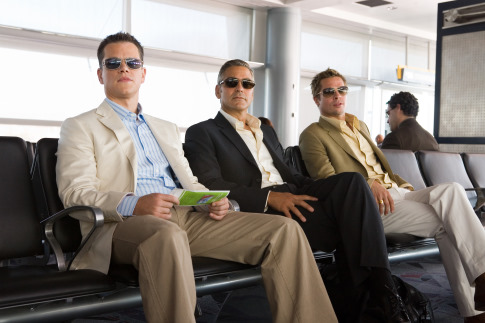 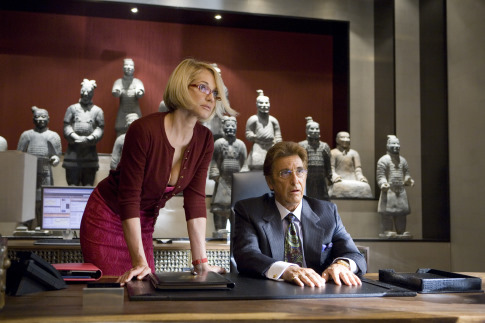 Ocean's Thirteen is little more focused than Ocean's Twelve, which was literally all over the place. And it's nice to see the boys again. They are so cute. But this heist is nowhere near as entertaining as the original Ocean's Eleven which remains a thing of beauty. In the original, all Basher (Don Cheadle) did was blackout the whole city of Las Vegas. This time he creates a pseudo-earthquake using the machine that was used to dig the Chunnel. There are two irritating subplots that could have been dispensed with. First, one of the twins (Casey Affleck) is sent to a dice-making factory in Mexico as part of the plot, but ends up leading a strike for higher wages. This is stupid and not funny and burns a lot of screen time. Second, Pacino wants to get the coveted five diamond rating for his hotel, and a representative (David Paymer) comes to the hotel to rate it. Danny Ocean's boys deceive Pacino into thinking that Carl Reiner is the representative, while subjecting Paymer to a nightmare hotel stay. Other than providing a reason for Pacino to have lots of diamonds for them to steal, this subplot is also stupid and not funny.

The boys including, in addition to the big three, Carl Reiner, Don Cheadle, Bernie Mac, Eddie Jemison, Scott Caan, Casey Affleck and Shaobo Qin are entertaining as usual and they have better parts this time. In Ocean's Twelve, a lot of the subplots were only there to give each person a little screen time. In Ocean's Thirteen, the characters all have things to do. All, that is, except for Gacia and Cassel, who are just included for completeness. Cassel's camo suit is cool though. And so is Matt Damon's huge nose. But there's no Julia or Catherine. They are sorely missed. Ellen Barkin was a good choice to fill the gap but she is totally wasted with a one-dimensional character. Pacino is good but he could sleepwalk through this role. Eddie Izzard (The Riches) has a small part but he may be the best thing in Ocean's Thirteen. Look for Bob Einstein (Super Dave) who plays Damon's dad. You may remember that Damon's mother had to come in and rescue the boys in Ocean's Twelve. Oprah makes a cameo appearance. There's a funny Oprah scene with Clooney and Pitt, but it's in the trailer so it is blown for the movie.

The plot of Ocean's Thirteen makes no sense even in the fantasyland of Danny Ocean. After the disaster of Ocean's Twelve, the director, Steven Soderburgh has tried to recreate the original. So Ocean's Thirteen repeats everything in Ocean's Eleven except not as well. The original, Ocean's Eleven, is just a perfect storm of great cast, great plot, and joie de vivre that can't be reproduced. Just watch the original over and over again. That's what I do.