I have been a bit sad this week after hearing the news of Paul Newman's death. I loved him. Besides being a great actor, Newman could, like no one else, project an immense likeability. It had a lot to do with those blue eyes and the smile. I'm sure I love all the same movies that you probably do, Cool Hand Luke, Hud, The Hustler, Butch Cassidy and the Sundance Kid, and The Sting. But, there are some other movies that should not be forgotten, not because they are necessarily great works of art, but just to see Paul Newman in action. Who ever thought that Paul Newman and the Hanson brothers would make Slap Shot, the best hockey movie ever? Put in on your Netflix if you haven't seen it in a while. It's very funny. But here I want to talk about one of Paul Newman's last movies, made in 1994, Nobody's Fool. In some ways, it's a little movie, with an Indie-type plot, set in a little town, following the small lives of its inhabitants. But this "Indie" movie was directed and adapted to the screen by three-time Oscar winner, Robert Benton (Kramer vs Kramer, Places in the Heart), and besides Paul Newman,it has a supporting cast including Jessica Tandy, Philip Seymour Hoffman, Melanie Griffith and Bruce Willis. 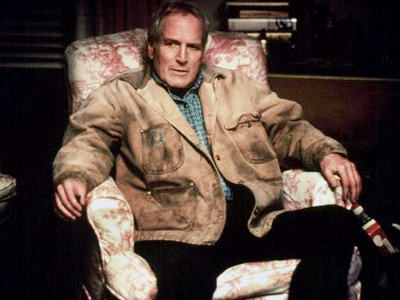 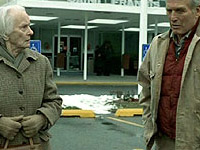 Nobody's Fool is about an old guy (Paul Newman), who seemingly hasn't done much with his life. He has never left the town he grew up in. He barely gets by doing odd jobs with his best friend (Pruitt Taylor Vince). He walked out on his wife and kids. He rents a room in a house owned by an elderly lady ( Jessica Tandy), whose son (Josef Sommer) is the most successful person in town. Newman is having a running feud with a local businessman (Bruce Willis) and flirts with his wife (Melanie Griffith). He begins to reconnect with his family when his son (Dylan Walsh) and grandson come to town down on their luck. Most of Nobody's Fool was shot in the wintertime adding to the gloom that hangs over the town. Like I said, it's an Indie-type movie, adapted from a book by Richard Russo. If it weren't for the huge Hollywood star wattage, it would be a nice little movie.

The fact is that Nobody's Fool is a nice little movie. And, darn it all, as Sarah Palin would say, these Hollywood stars can actually act if they get a good script and a good director. This is almost Paul Newman's last starring role and it is one of his best. His portrayal of an old curmudgeonly guy, who at first seems to be useless, but turns out to be the most important guy in town, fits him perfectly. Nobody's Fool should really be called, Local Hero. It's also Jessica Tandy's last movie, and one of Phillip Seymour Hoffman's first films. Tandy died shortly after this film wrapped, but she is in fine form as one of the many townspeople that Newman ends up taking care of. Hoffman has an entertaining bit part as the town's inept police officer. Bruce Willis is very funny as the amoral businessman who locks horns constantly with Newman. They are two sides of a coin. And Griffith has a very sweet role as the middle-aged woman who suddenly sees the difference between Newman and Willis. The great supporting characters go on and on, including Vince as Newman's long-suffering best friend and Walsh as his estranged son.

Nobody's Fool is one of the those movies that I could sit down and watch every day. It is a joy just to see Paul Newman being Paul Newman. He was almost 70 and looking it when he made this movie, but he hadn't lost anything. Needless to say, you should put this on the top of your Netflix list, especially if you haven't seen a Paul Newman movie lately, just to remember that the blue eyes and the smile are still there even in winter.