When the book, The Nanny Diaries, came out a few years ago, it had quite an impact. The story it tells about a child, almost completely abandoned by dysfunctional parents to the care of a nanny, is shocking. Shocking, because it goes against what most of us feel is the strongest desire of all, to take care of one's own children. And also shocking because we know and feel that the story is true even though it is a work of fiction. This trueness was reinforced by the fact that the authors, Emma Mclaughlin and Nicola Kraus, were former nannies. There was some discussion at the time about which actual families living on the upper east side were the models for the book. The impact of the book was increased by the fact that the authors didn't give in at the end. It ends with the only person who loves the kid, the nanny, being fired and the poor kid being left with his unloving parents. 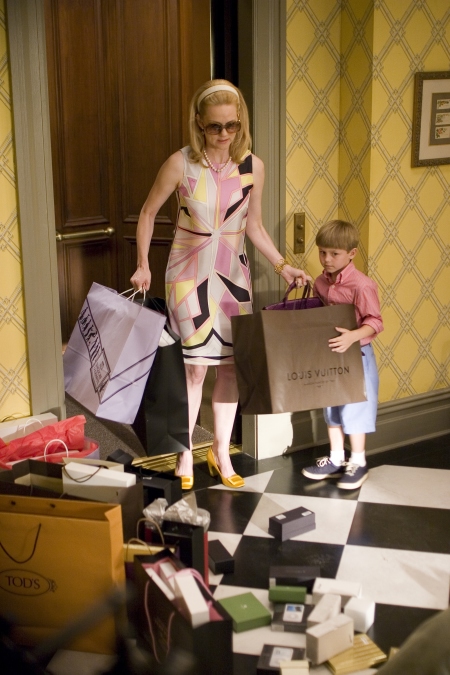 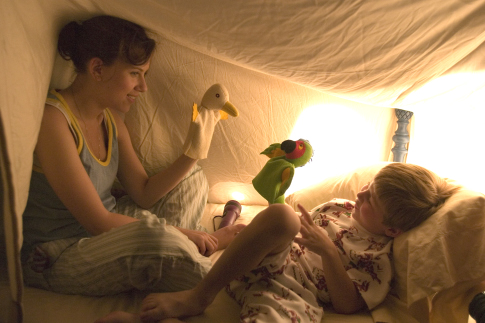 Now there is a movie version of The Nanny Diaries. On the surface, it is the same story. A young woman at loose ends after college (Scarlett Johansson) applies for and gets a job as Nanny to a little boy (Nicholas Art), whose parents (Laura Linney & Paul Giamatti) go way beyond the maxim that children should be seen not heard, to one where children should neither be seen nor heard. The Nanny plunges into this world of pain and much like Anne Hathaway's character in The Devil Wears Prada is trapped 24/7 in this strange new world, and becomes a part of it. But unlike The Devil Wears Prada, Johansson's character is not tempted by this new world. It never seems like heaven. From the beginning it is hell. But here is where the essential differences from the book to the movie come in. Laura Linney is playing Mrs. X and Laura Linney cannot play a character, even a character as one-dimensional as Mrs. X was in the book, as a one-dimensional character. Linney finds unknown dimensions in any character which then burst forth onto the screen. This is her gift and it is why she is one of the best actresses around. Check out Mystic River to see what I mean about what she can do with a one-dimensional character. She has a nothing part in Mystic River, the wife of Sean Penn. She really only has one scene. But in that one scene she turns in a terrifying performance as the woman who makes Sean Penn's character the man that he is. It is amazing. Anyway, Linney was bound to change Mrs. X and make her more human. A second force was also at work. The Nanny Diaries is a Hollywood movie. And that means that a realistic but depressing ending like that in the book is difficult to maintain. What I am talking about is the Hollywood ending. Don't get me wrong. I am part of the target audience for the Hollywood ending. I like a happy ending as much as the next person, but I really respect films and filmmakers that don't give in and don't have such an ending. Well, you already know what I'm going to say. The makers of The Nanny Diaries couldn't resist changing the ending and giving Linney's version of Mrs. X a way out, an epiphany, where she realizes her mistakes and becomes a good mother to her son.

I read in the NY Times review of The Nanny Diaries that Johansson made a big mistake by showing up for this movie and being in the same scenes with Linney. As you know, I’m a big Laura Linney fan, but I think the Times reviewer was selling Johansson short. OK, she’s no Laura Linney and she never will be, but she does OK, and Linney doesn’t exactly wipe the floor with her. The small supporting cast is good. Paul Giamatti (Sideways) is wasted as Mr. X. He could and almost does make something out of this character but its one-dimensionality resists expansion. Chris Evans (Fantastic Four), Johansson's love interest, has some amusing scenes with her. Alicia Keys has a nothing role as Johansson's BFF. And Donna Murphy (Star Trek: Insurrection) makes a good worried mother playing Johansson's worried mother.

In addition to changing the ending, the directors, Shari Springer Berman and Robert Pulcini, have flattened out all the edginess of the book. This is weird because they made American Splendor (Paul Giamatti's breakout performance) which is a very edgy movie. Anyway, The Nanny Diaries is Ok. It's always interesting to see Laura Linney make a monster into a person. The Nanny Diaries a diverting trip to the theatre or perhaps for a Saturday evening rental, but on the whole, I prefer the book.