Ok, It's true. I'm the only person ever to go to India and not see the Taj Mahal. It's a long story. But I was thinking about this strange fact as I watched The Namesake. It's the newest film directed by Mira Nair, best known for Monsoon Wedding and Mississippi Masala. She grew up in India before moving to the States to attend Harvard. Her new film, The Namesake, is a Stranger in a Strange Land story like many of her other films. It tells the story of two generations of a Bengali family. The parents (Irfan Khan and Tabu) grew up in India and emigrated to the United States soon after they got married. Their kids (Kal Penn and Sahira Nair) have grown up as Americans and have little interest in their Bengali heritage. The son rebels against his parents by dating a blonde American (Jacinda Barrett) but eventually marries a Bengali-American (Zuleikha Robinson). The family does travel to India and sees the Taj Mahal (pictured below). The son is named Gogol after his father's favorite author, Nikolai Gogol. The father was reading Gogol's famous story, The Overcoat, on a train when it crashed almost killing him, and the experience made him decide to move to America. Other than naming himm Gogol, the father is unable to talk to his son. The Overcoat could be interpreted as a metaphor for The Namesake. The son thinks he wants the new overcoat but finds out eventually that the old one isn't so bad. 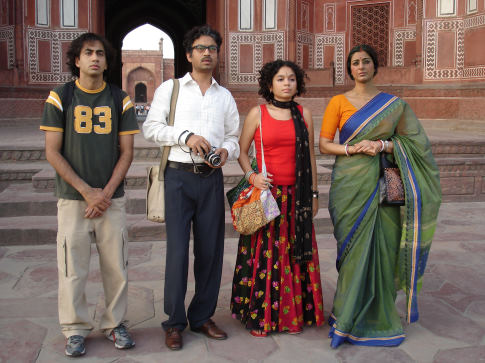 Mira Nair really knows how to tell a story about family. Monsoon Wedding really blew me away. It was amazing how she was able to get her message across even though the characters were speaking three languages, often in the same sentence. The Namesake, usually with only two languages per sentence, is excellent also. The three main characters, the father, mother and son, played by Khan, Tabu and Penn are full of heart and heartbreak. It all feels very true to life. Khan and Tabu are both well known actors in India. They are very good, particularly Tabu. Kal Penn is from New Jersey. You may have seen him as Kumar in Harold & Kumar Go to White Castle, or as a terrorist in 24. The daughter is played by Nair's real-life niece, Sahira.

This kind of movie about a clash of cultures and a clash of generations has been done many times, of course, in The Joy Luck Club, Crossing Delancey, and Eat, Drink, Man, Woman to name a few. And so the plot of The Namesake is not going to surprise anyone. But it doesn't matter. You will recognize your own family in these characters even though they come from halfway around the world. As Dostoyevsky, Tolstoy or Turgenev may have said, "We all came out of Gogol's Overcoat."