``I said I wasn't going to lose my head but then Pop! goes my heart. I wasn't going to fall in love again but then Pop! goes my heart.'' I hate to say it but these lyrics to the song, Pop! Goes My Heart, have been running through my head ever since I saw the new movie, Music and Lyrics. Click here for a sample. In this amusing film, a washed up, former member of an 80's boy band (Hugh Grant) gets a chance at a comeback when a Shakira/Britney clone (Haley Bennett) asks him to write a song for her. The only problem is that he can write music but not lyrics, and he hasn't even written any music for 20 years. Grant is about to give up when the woman (Drew Barrymore) who waters his plants spontaneously starts singing lyrics to his music. The rest, as we say, is history. Of course, there are a few bumps on the road to true love, including Drew's ex-professor and obsessive love interest (Campbell Scott). The best thing about this movie is the effort that was put into creating the 80's boy band, Pop!, including their songs and music videos. They are hilarious and, as I mention above, the songs are actually hummable. In the picture below left, Hugh Grant is playing keyboards. Much of Music and Lyrics is devoted to, you guessed it, music and lyrics. As shown below right, Barrymore and Grant spend most of their time together writing songs. 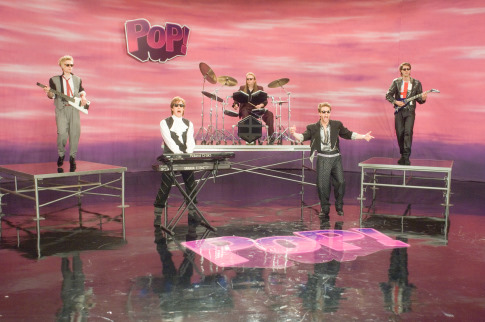 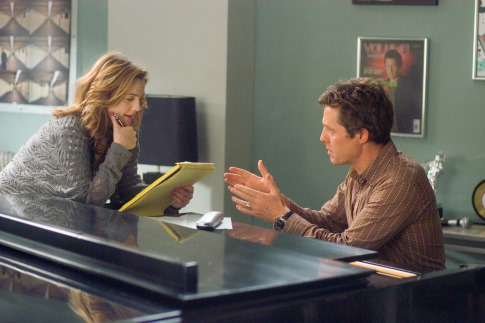 Even though I am a fan of Barrymore and Grant, I was on the edge about whether to see this movie. What convinced me was this exchange in the trailer between Grant (Fletcher) and Barrymore (Fisher) as they work on Haley Bennett's song:

Alex Fletcher: [singing] Sleeping with a clown above my bed...
Alex Fletcher: "Clown" is not right
Sophie Fisher: That's "cloud." Why would you put a clown in your bed?
Alex Fletcher: It would not be the first time.

I laughed every time I saw the trailer so I went to see the movie. I was not disappointed. Music and Lyrics is not great art, but it is a pretty good chick flick. Hugh Grant is at his best when playing, well, Hugh Grant. His best Hugh-Grant performance was in About a Boy, closely followed by Four Weddings and a Funeral. But he's very good in Music and Lyrics and he has a nice chemistry with Barrymore who has been a favorite of mine since she was six years old (E.T. the Extra-Terrestrial). Of Course, she went through the roof in my books when she starred as the neophyte Red Sox fan in Fever Pitch. The supporting cast is also good, led by Haley Bennett, who channels a very scary Britney, Brad Garrett (Everybody Loves Raymond) as Grant's long-suffering manager, and Kristen Johnston (3rd Rock from the Sun) as Barrymore's Hugh-Grant-crazy sister.

There are no surprises in Music and Lyrics. It follows the chick-flick playbook, boy meets girl, boy loses girl, boy gets girl back. But it all works very well, except for the subplot with Campbell Scott as Barrymore's Ex, who has left her traumatized and unable to function. They should have left it on the cutting room floor. But otherwise Music and Lyrics is a cut above most of its genre because of the the care that was taken in sending up the music of the 80's and today. This is a fun movie to get us out of our post-Oscar doldrums and hopefully heralds lots of good new movies coming down the pike in 2007!