I'm not sure where all the controversy about this movie came from. It received scathing reviews from the French at Cannes. But maybe they just couldn't accept a movie about Marie Antoinette made by an American. Of course, Marie Antoinette was an Austrian by birth, so I dunno. As far as sticking to the facts, this new film sticks closer to the real historical facts than any other biopic that I can think of. Reading through the Wikipedia precis of Marie's life, I could only find one thing that was different from the film. In fact, the Wikipedia entry reads like an outline of the screenplay. The one thing I noticed was that Marie's oldest son, the dauphin, died at age 7, and his brother took over as the heir apparent. The two sons seem to have been merged into one for the film. Anyway, like I said, Marie Antoinette is the story of the infamous queen of France (Kirsten Dunst) who apparently never actually said, "Let them eat cake." The film follows her life from her betrothal at age 14 to the future King Louis XVI (Jason Schwartzman) of France to shortly before her death in 1793 at the age of only 37. She was the daughter of Empress Marie Theresa (Marianne Faithfull) and her betrothal was part of a treaty between Austria and France. Most of the action follows the first few years of Marie Antoinette's marriage, when her husband was having some erectile dysfunction. Since this occurred before Viagra came onto the market, the young newlyweds had to work it out themselves. Her first child was born after seven years of marriage. The photos below show the real Marie Antoinette and her movie counterpart. 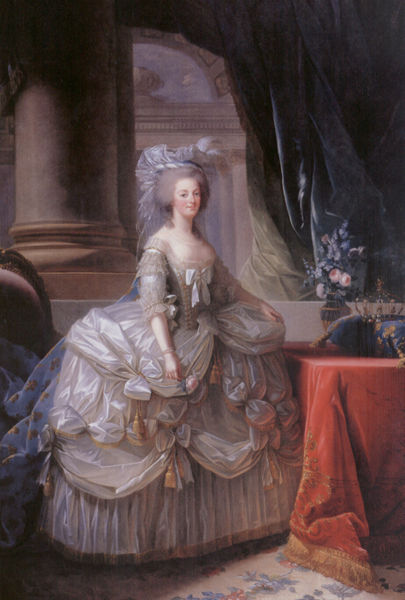 Much of Marie Antoinette concentrates on life at Versailles and the politics of the court. Marie has to the learn the ropes with the help of her chief lady-in-waiting (Judy Davis) and the Austrian ambassador (Steve Coogan). She is opposed by her husband's aunts (Shirley Henderson & Molly Shannon) and his grandfather's mistress (Asia Argento). But she makes her own friends among the princesses and comtesses (Rose Byrne & Mary Nighy), and even among the counts (Jamie Dornan). Louis ascends the throne upon the death of his grandfather, Louis XV (Rip Torn). Money problems (they have too much and the people have too little) increase with time, leading eventually to the revolution. Some things in the film are hard to believe but all of the events portrayed in the movie are real. Every morning Marie would awake to a room full of ladies-in-waiting, waiting to dress her. And she and her husband ate in public. Anyone who was well dressed was allowed into the palace to watch them eat. Even the apparently overly dramatic scene, where Marie comes out onto the balcony of the palace to face down the angry crowd, actually happened that way.

Marie Antoinette was written and directed by Sofia Coppola, daughter of Francis Ford Coppola, granddaughter of Carmine Coppola, niece of Talia Shire, cousin of Nicholas Cage and Jason Schwartzman. This is her third feature (all written and directed by her) after The Virgin Suicides and Lost in Translation. She is the third generation of her family to win an Oscar (screenwriting for Lost in Translation). Her father, grandfather and cousin (Cage) also have won Oscars. She likes to work with her family. On Marie Antoinette, she is joined by her cousin, Jason Schwartzman, who plays Louis XVI, and her brother, Roman, who is the second unit director.

Kirsten Dunst seems to have been around forever, but she is only 24 years old. She was twelve when she did Interview with the Vampire, and seventeen when she did The Virgin Suicides. In this new film, she has to play Marie from age 14 to 37. She does quite well with it, although she obviously looks older than 14 in the early scenes. Schwartzman (Rushmore) is very good as the king, who is, if anything, more out of touch with the world than his wife. I liked Dunst and Schwartzman together. They project, very nicely and with very few words, how a great love grew between these two people over the years at Versailles. At the end of her life during the revolution, Marie refused to be separated from her husband and so was doomed. Dunst and Schwartzman are surrounded by a nice supporting cast. Rip Torn is perfect for the larger-than-life Louis XV, and I really liked Steve Coogan as the ambassador and mentor to Marie. And it's nice to see Judy Davis get a nice role. She is a veteran of Woody Allen, Coen brothers and David Cronenberg movies. One interesting casting note concerns Shirley Henderson, who plays one of Louis XVI's aunts. She plays the teenage ghost, Moaning Myrtle, in the Harry Potter films, and a woman of a certain age in Marie Antoinette. Her actual age is 41.

Sofia Coppola makes very interesting films and Marie Antoinette is no different. All three of her films have been about people who are isolated from the world. In The Virgin Suicides, the five sisters (including Kirsten Dunst) are isolated by their father and take a desperate method of escape. In Lost in Translation, two Americans are strangers in a strange land in Japan, and are isolated from everyone except themselves. And in Marie Antoinette, the title character is famously isolated from the real world of 18th century France. Coppola does a very good job of portraying the title character's loneliness and feeling of isolation. Her use of a combination of period and modern music also works well to accent Marie's separation from the world. Maybe Coppola does too good a job, because it isn't always apparent what is happening around Marie. This is especially true later in the movie when several years are apparently passing from one scene to the next, and the passing of time can only be gauged by the lines on Marie's face and the ages of her children. It helps quite a bit, in following the movie's plot, to already know Louis and Marie's actual history. Then, when the royal couple drive off into the dawn in the last scene of the movie, apparently escaping the angry hordes, you will know that their carriage is stopped, when someone recognizes Louis' face from a coin, and they are thrown in prison, eventually to go to the guillotine. Perhaps the fact that these more gruesome scenes have been left out of the story, explains why teenage girls seem to be the target audience for Marie Antoinette. I was surrounded by them and their cellphones at the show I attended. To them it was just another episode of Sex and the City.