Ok, I went to see The Lookout mainly because it stars Joseph Gordon-Levitt. I have to say that I'm kind of in love with this guy. Sorry Peter Sarsgaard, but I can be pretty fickle. Joseph Gordon-Levitt, of course, is still best known for the being the kid on 3rd Rock from the Sun. He's twenty-six years old now. Where did the time go? Anyway, he made this amazing movie two years ago, called Brick. My main aim in writing this review is to get you to put Brick on your Netflix list. Do it now! Ok, I never wrote a review of Brick because I didn't see it until long after it "wasn't" in the theatres. But it is amazing. In Brick, which is told in flashbacks, Gordon-Levitt (pictured below right) plays a student who doesn't fit in at a California high school, but he might as well be playing his character from 3rd Rock from the Sun. Brick seems to be set on another planet. The kids don't even seem to be speaking English. It's very hard to follow the dialog at first but it's worth the effort. Brick also stars Lukas Haas (Witness) as a drug kingpin who works out of his mother's basement, Emilie de Ravin (Lost) as Gordon-Levitt's very ex-girlfriend, and Nora Zehetner (Heroes) as Gordon-Levitt's maybe next ex-girlfriend. Brick totally blew me away. 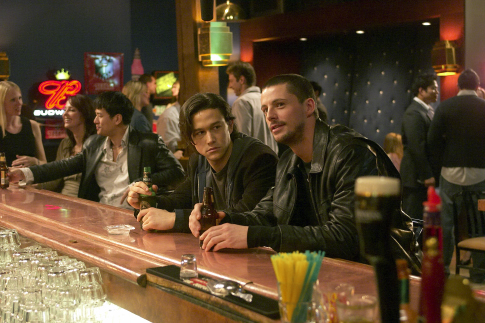 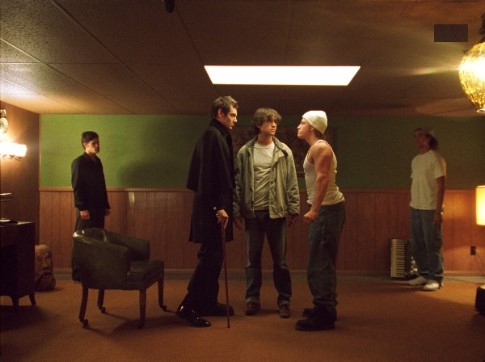 Let's see where was I? Oh ya, The Lookout. This is Joseph Gordon-Levitt's newest movie, which is in theatres now. The Lookout (pictured above left) is sort of a cross between Memento and Fargo. Gordon-Levitt plays a young man who has been badly injured in a terrible car crash in which two of his friends were killed. He isn't the same person that he was before, i.e. BMOC at high school, star of the hockey team. He can barely function. He doesn't get tattoos to tell himself what to do, but he writes everything down in a notebook. He works as the night custodian at a local bank. He lives with an older blind man (Jeff Daniels). While having a drink at the local bar, he is befriended by a man (Matthew Goode) who says he went to high school with Gordon-Levitt. He and his pals (Morgan Kelly, Aaron Berg, Isla Fisher & Greg Dunham) are planning to rob the bank and want to set up Gordon-Levitt to take the fall. This is where Fargo comes in. These guys, except maybe for Fisher who pretends to be Gordon-Levitt's girlfriend to reel him in, are a bunch of sociopaths. In particular, Goode is playing the Fargo Steve Buscemi role and Greg Dunham does a great Peter Stormare impersonation. Anyway, Gordon-Levitt is completely taken in. He is having trouble remembering to get dressed in the morning before he leaves his apartment, so he doesn't "get" what's happening. You know from the beginning that The Lookout is going into a bad death spiral, and that, sooner or later, The Lookout is going to end like Fargo. Not quite, but I won't spoil it for you.

The Lookout marks the directorial debut of yet another screenwriter, Scott Frank (The Interpreter, Minority Report). He does a good workmanlike job and lets the actors do their stuff. Gordon-Levitt is fab again in this role as the guy who can't quite "sequence" his life. The Lookout has a strong supporting cast of veterans including Carla Gugino and Bruce McGill, as well as Jeff Daniels. Daniels (The Squid and the Whale, Good Night and Good Luck) seems to be making a bit of a dent again, after being MIA while running the Purple Rose Theatre Company in his home town, Chelsea, Michigan. McGill (Cinderella Man, Into the Night) plays Gordon-Levitt's father, who thinks that he should give up on life and just come back home. He's always great. The would-be bank robbers, particularly Goode, Fisher and Dunham, are by turns friendly and scary. You may have seen Fisher hanging onto the arm of Sacha Baron Cohen (Borat) at various awards shows recently. They are engaged.

The Lookout is a showcase for Joseph Gordon-Levitt and he makes the most of it. He's a joy to watch on the screen. Unfortunately, The Lookout is fading away from the theatres so you may have to see it on DVD. You can put it on your Netflix list too. But don't forget to rent Brick.