Sometimes, it doesn't matter how good a film is, it is still a real downer. Such is La Vie En Rose. It tells the sad, sad story of Edith Piaf. The true facts about Piaf's early life are full of myth and legend. She may or may not have been born in a fish market, and been blind and deaf for a time. She was abandoned by her parents and raised in a brothel. Her life was one disaster after another until she succumbed to liver cancer when she was only 47. But she had that voice. This is the subject of La Vie En Rose. In this new biopic, in French with subtitles, we follow Edith Piaf (Marion Cotillard) from her youngest days, singing on the street, to her discovery by the impresario, Louis Leplée (Gérard Depardieu) (shown below with Cotillard and Sylvie Testud who plays Piaf's sister and partner in crime) and her rise to fame, followed by bad, bad things. First, Louis is murdered by underworld types who just happen to be pals of Piaf, then she falls in love with a prizefighter (Jean-Pierre Martins) who dies in a plane crash. Then there are the physical problems, first because of injuries in several car crashes, and then the cancer. 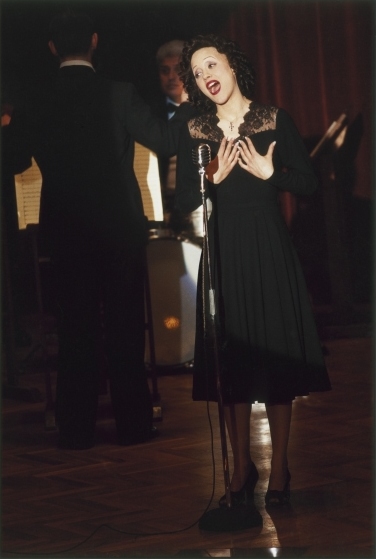 This film is worth seeing if only to see Marion Cotillard. I've liked her ever since I first saw her as Albert Finney's very pregnant daughter-in-law in Big Fish. She did a lot with a nothing supporting role in that film, her first in english. She also did a nice job in A Good Year this spring with Russell Crowe. But her metamorphosis in La Vie En Rose is right up there with Nicole Kidman's performance as Virginia Woolf in The Hours. If you didn't know it was Cotillard playing the role, you would never recognize her. She is a totally different person, i.e., Edith Piaf. Even though Cotillard can sing, the songs in La Vie En Rose are all lip synched. The supporting cast is very strong. It's nice to see Gérard Depardieu, and Sylvie Testud is fantastic. Plus I liked the look of La Vie En Rose. The art direction is great. The 30's, 40's and 50's look very real. The story of La Vie En Rose is sad but it's also true. So take your Prozac and put it on your Netflix list.