I didn't realize that The Last Kiss was going to be a bad flashback until one of the characters suggested meeting at "The Terrace." Yikes. The Last Kiss is set and was filmed on location in Madison, Wisconsin. I lived there for 5 years and spent quite a bit of time drinking beer at "The Terrace" which is at the University of Wisconsin Student Union, picturesquely located looking out over Lake Mendota (see below). 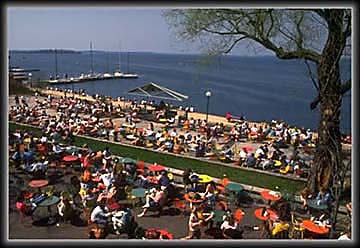 In The Last Kiss, a young architect (Zach Braff) is settling down with his newly pregnant girlfriend (Jacinda Barrett) when he meets and becomes obsessed by a younger student (Rachel Bilson) at UW. It is she who asks Braff to meet at "The Terrace." I had some similar experiences twenty years ago in Madison, although thankfully, no one was pregnant. But bad flashbacks aside, Madison looks very good and is a good backdrop for this little film. Of course, they didn't film in Madison during the winter. But it does always seems to be raining in the movie. In addition to our love triangle, Braff is surrounded by the usual group of slacker friends (Casey Affleck, Eric Christian Olsen & Michael Weston), and his girlfriend is supported by her dysfunctional parents (Blythe Danner & Tom Wilkinson). The parents are supposed to be the role models for the perfect marriage, but after 30 years together, they are not speaking and are on the verge of breaking up. Danner even had an affair with a professor (Harold Ramis) at UW. Braff's friends are having the usual problems. Affleck is breaking up with his wife. Weston is stalking an ex-girlfriend. And Olsen has commitment issues.

This film has neither the energy nor the edge of Braff's last film, Garden State. In The Last Kiss, Braff is not writing or directing, only acting, so he can't take the blame for its weaknesses. It was directed by Tony Goldwyn, better known as an actor who plays baddies (Ghost, The Last Samurai). The screenplay is by Paul Haggis (Crash), but The Last Kiss is a remake of an Italian film, L'Ultimo Bacio which means, you guessed it, The Last Kiss. Even if you haven't seen L'Ultimo Bacio, you will feel like you have seen this film many times before. It is hard to make something fresh with this plotline. Garden State was very fresh but The Last Kiss is not. There are no surprises. You know that Braff won't run off with the coed. You know that his girlfriend will take him back after a certain amount of penitence. You know that her parents will get back together. You even know that Affleck will not abandon his wife and kid to go traipsing around South America with his loser friends.

Zach Braff is very likeable. In fact, he's so likeable that you can't really believe that he's going to cheat on his pregnant girlfriend. He was a more realistic character in Garden State where there was something approaching 3 dimensionality in the characters. But in The Last Kiss where you are lucky if you have 2 dimensions, it's not possible. Wilkinson and Danner are very good as the unhappy parents but they are just rising above the material. Bilson (The O.C.) and Barrett (The Real World) are not able to rise above the material, so they are lost in boring one-dimensional characters. You really wish that Braff had a third choice. Go rent Garden State.