Movies about real people are always a problem for me. I want to know what really happened and what the screenwriter made up. I find it less of a problem if the "real" people lived a long time ago. Idi Amin is finally dead, but he certainly strode the world stage during my lifetime. The new film, The Last King of Scotland is based, not on Idi Amin's actual story, but on a novel of the same name, that presented a fictionalized version of Amin's life. In particular, the character of the young Scottish doctor, Nicholas Garrigan (James MacAvoy), who becomes Amin's intimate and confidante, is a fiction. Garrigan's character is very loosely based on an former English soldier, Bob Astles, who was an associate of Amin's. Actually, the film is very different from the book, so it is a fictionalized version of a fictional book. That being said, the broad strokes of the story of Amin and his violent rule of Uganda is correct. But even well known historical events, such as the Entebbe hijacking, are not presented as they actually happened. 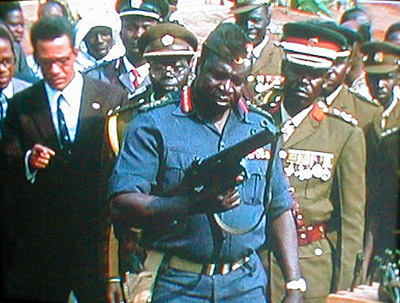 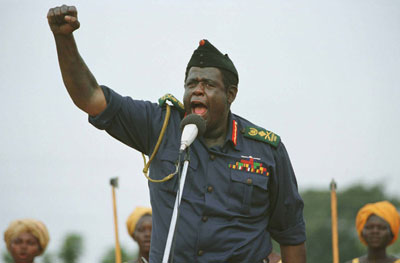 Of course, lots of great movies have been made that played fast and loose with the facts. And The Last King of Scotland is very good. In the film, Amin is played by Forest Whitaker. The pictures above show Whitaker and his alter ego. Forest Whitaker has had a very idiosyncratic acting career, playing big lugs with big hearts but also with an edge. His first breakout part was a small supporting role as a pool hustler in The Color of Money, followed by Platoon, Good Morning Vietnam, Bird, and then another small part with a big impact in The Crying Game. But it is in Idi Amin, that Whitaker has found the role of a lifetime. The Last King of Scotland has won him many awards including the Best Actor Oscar. Even in supporting roles, Whitaker really grabs the focus when he is on screen. But he is front and center in The Last King of Scotland as the larger than life Amin. He fits the role physically. He is 6' 2", and 220 lb. And he just reaches through the screen and grabs you. James MacAvoy, in his first big role, stands up to Whitaker pretty well. It is rumored that MacAvoy's next role will be as Scotty in Star Trek XI. The supporting cast is also good, led by Kerry Washington (Ray), as one of Amin's wives who MacAvoy has an affair with, and Gillian Anderson (Forever Scully from The X-Files), as an aid worker who wants to have an affair with MacAvoy. He also has a thing with a woman he meets on the bus. You get the idea.

The Last King of Scotland film has some similarity to Hotel Rwanda but it is much more focused on the higher ups than Hotel Rwanda which focused on the hoi polloi. There is some graphic violence and showing of dead bodies etc. etc., but there is less than in a lot of movies that I have been seeing lately (Apocalypto, Letters from Iwo Jima, Pan's Labyrinth). The Last King of Scotland is directed by Kevin Macdonald, whose only other directing credit is for Touching the Void. I think Macdonald was smart and just said "roll it," and let Whitaker do his thing. It's definitely worth it for you to just sit back and watch Whitaker do his thing. He deserved the Oscar.