In the Land of Women

This film is very aptly named. In the Land of Women tells the story of a young Hollywood writer (Adam Brody), who after breaking up with his girlfriend (Elena Anaya), decides to get away from it all and chill out. As pictured below, he heads home to Michigan to stay with his grandmother (Olympia Dukakis), but ends up spending quality time with the family across the street, including the unhappy, unfulfilled mother (Meg Ryan), her unhappy teenage daughter (Kristen Stewart) and her very happy tween daughter (Makenzie Vega). Brody is very depressed. His grandmother is very depressed. Meg Ryan is very depressed. Kristen Stewart is just sullen and angry. There are reasons for all this. Brody is shattered by his breakup. Ryan's husband (Clark Gregg) is having an affair and she has breast cancer. And Stewart is mad at her mother for not standing up to her father about his affair. The younger daughter is just high on life. Not much happens in this movie. But there is quite a bit of personal growth and, since it is the land of women, there is lots of talking about how unhappy everyone is. 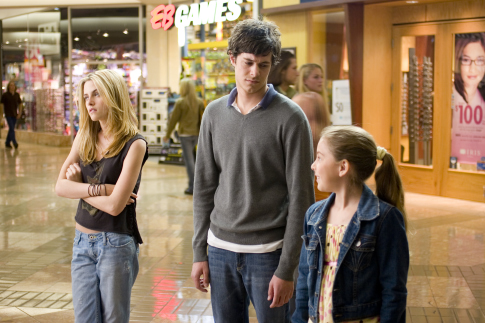 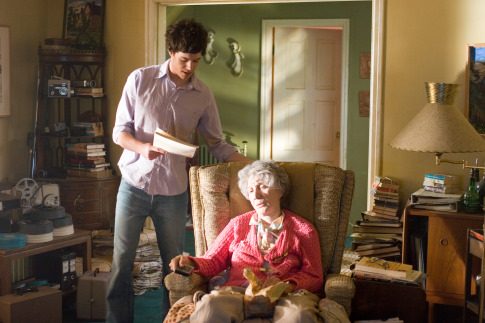 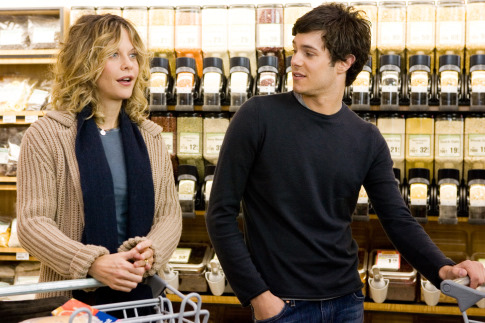 In the Land of Women should have been much better. The cast is great. This is my first experience with Adam Brody, except for small parts in Thank You for Smoking and Mr. & Mrs. Smith. I never watched The O.C. He is nice and cute in this role. The women all are excellent. Mikey says that she can't watch Meg Ryan anymore, because she has had too much "work" done, but I think enough time has passed since the "work" was done, and she starting to look human again. I dunno. Really I just love Meg, always have. It's also my first experience with Kristen Stewart, except for her role as Jodi Foster's kid in Panic Room. She may be the new 'it' girl. Stewart looks enough like a 17-year-old Meg Ryan to be her real daughter. Olympia Dukakis has one of those roles where she can really eat the scenery and she does it with gusto.

In the Land of Women was written and directed by another first timer, Jon Kasdan. To call him a first timer is a bit of a misnomer since he has been around movies all his life. He had bit parts as a kid in three films directed by his father, Lawrence Kasdan, Accidental Tourist, The Big Chill and Silverado. Jon's brother Mark (Zero Effect) is also a director. With all that writing and directing DNA, you'd think that Jon Kasdan would be a better first time writer/director. The screenplay for In the Land of Woman, in particular, is wanting. Kasdan sets up some interesting characters, played by some interesting actors, but the payoff isn't there. He paints himself into a corner with the script and then, suddenly, most of the characters have happy epiphanies at the end. It's too glib. Too bad. In the Land of Women is a place that I would like to be.