It's hard to believe the things that reviewers are saying about this movie, such as, it's the defining film for our age, the equivalent of When Harry Met Sally. Knocked Up has 92% good reviews on Rotten Tomatoes. And it is getting bizarrely high ratings from viewers. Today, it's number 135 on the all-time highest-rated movie list on IMDB. I won't keep you in suspense. I don't think that Knocked Up is a movie for the ages. It's a mildly funny comedy that doesn't have any edginess, and certainly isn't breaking any new comedic ground. There is no equivalent of Billy Crystal or Meg Ryan. There's not even a Bruno Kirby. So everyone needs to calm down.

Knocked Up is the story of two young people (Katherine Heigl & Seth Rogen) who meet in a bar, get really drunk, and then have a one-night stand. That would have been the end of it except that, as is discussed at length in the movie, no condom was used, and two months later Heigl realizes that she is pregnant. Even though she is single, living with her sister and just getting going on her career, Heigl decides, first, that she is going to have the baby, and second, that she needs to contact the father. That would be Rogen, who has no job, and sits around all day with his slacker friends, smoking up. The couple try to make a go of it even though there is no hint of compatibility and no chemistry whatsoever. I can believe that if Heigl got drunk enough, she might have sex with Rogen but it is beyond belief that she would have any interest in him when she is sober. But this is a comedy for the ages, so one must try to suspend one's disbelief. 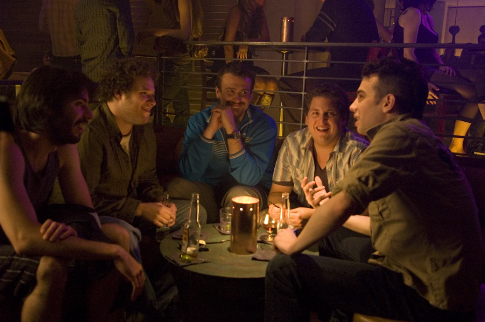 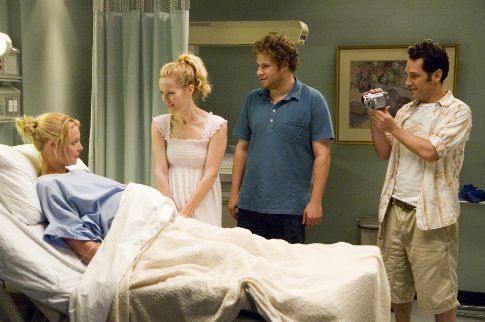 Knocked Up does not have a complicated plot. We follow Heigl and Rogen's on and off relationship as she gets closer and closer to her due date. We pass the time getting to know Rogen's slacker pals (Jay Bauchel, Jonah Hill & Martin Starr). There are two running jokes. One is that they are trying to develop a million-dollar web site that will tell the user which scenes of which films contain nudity. They are blissfully ignorant that this kind of site already exists. It is a milestone in product placement that Mr. Skin, the real web site for this sort of information, is used in the movie. At least, I've heard that it's the real web site, since, obviously, I've never looked at it. Where was I? Oh ya, the second running joke concerns one of Rogen's roommates, who has made a bet that he can only win if he doesn't shave or get a haircut for a year. As as result, his "friends" insult him in every scene about his resemblance to Osama Bin Laden and other well known bearded weirdos. I didn't say they were funny, I just said there were two running jokes. We also pass the time getting to know Heigl's sister (Leslie Mann) and her husband (Paul Rudd). They have two small kids (Iris & Maude Apatow) and have the usual stressed out marriage. The running joke here, if you want to call it that, is that Rudd is always disappearing and his wife thinks that he is having an affair. I won't spoil the joke for you by telling you what he is actually doing. An amusing side-plot, at least for me, is that Rogen is playing an illegal Canadian immigrant and one of his roommates (Baruchel) also seems to be Canadian since he has a red maple-leaf tattoo over his heart. Actually, Rogen and Baruchel are both Canadian in real life, as is Harold Ramis, who plays Rogen's father in Knocked Up. The Canadian Conspiracy rears its ugly head!

Paul Rudd, who plays Heigl's goofy brother-in-law, is by far the best and funniest thing in Knocked Up. He is hilarious. Leslie Mann is good too as Heigl's sister. In real life, she is married to Judd Apatow (The 40 Year Old Virgin) who wrote and directed Knocked Up. And the two kids in the movie are Apatow and Mann's real kids. Rogen's roommates are funny enough but, really, in how many hundred movies have we seen these same characters doing the same jokes. There are a few scenes about Heigl's job. She works at E! television. In the first scene, she gets promoted from stage manager to on-air interviewer, as if that is something that would actually happen. Ryan Seacrest and James Franco have scenes playing evil versions of themselves, or maybe that's the real them. Alan Tudyk (Serenity) plays Heigl's boss who apparently doesn't notice she is pregnant until she is in her 9th month. One of the many things that are hard to swallow is that her boss wants her to lose 20 pounds (before she gets pregnant), and even when she is pregnant, she shows no sign of gaining weight except for her (really bad) fake belly. The other thing is that Rogen and his friends somehow seem to living on zero income even though they are eating, drinking beer and smoking dope 24/7. I had friends with a house exactly like that but they had jobs.

The two leads, Rogen and Heigl, are OK. I like Heigl. She's on Grey's Anatomy, one of my favorite shows. Rogen (and Rudd and Mann) was in The 40 Year Old Virgin and he is likeable, but let's get real. He and Heigl are not a believable couple, even in a comedy. If you want to see this kind of movie done right, then rent The Tao of Steve. This one should go on top of your Netflix list. It is one of my all-time favorites and it actually makes an overweight, dope-smoking slacker into a very attractive person. Knocked Up is funny at times but it doesn't have any real flow. It feels very choppy, like it's a bunch of funny scenes that the director pasted together. In particular, Heigl's job subplot, disappears for about an hour in the middle of the movie. It's also hard to accept Rogen's sudden transformation into the perfect boyfriend late in the movie. But don't get me wrong. Knocked up is OK. It's got some funny scenes. I even laughed out loud a few times. But When Harry Met Sally? No. I know When Harry Met Sally and Knocked Up is no When Harry Met Sally.