The Assassination of Jesse James by the Coward Robert Ford

Maybe it's just the boy in me but I like a good western. And westerns, let alone good westerns, don't come along too often these days. They seem to be poison at the box office. And so it was with two pretty good westerns that came out in 2007. The Assassination of Jesse James by the Coward Robert Ford which runs about as long as its title, cost $30 million, stars Brad Pitt, but made only about $3 million at the US box Office. The other movie, 3:10 to Yuma, did a bit better. It cost $50 million, stars Russell Crowe, and just about broke even at the box office. I think 3:10 to Yuma is a better movie than Jesse James (I will abbreviate the title so this review doesn't go on forever. First of all, 3:10 to Yuma has a good name. A western ought to have a good name. Jesse James' title is ok if you want the title to be a summary of the plot.

It was fun to see these movies back to back as I did recently (They are both out on DVD). 3:10 to Yuma is a good, old-fashioned shoot-'em-up, where you end up rooting for the bad guys even though they are really bad guys, just because they are having such a good time. On the other hand, Jesse James is a typical example of a post-modern western, wherein the title characters, both of them, suffer from severe existential angst, and nobody is having a good time. The main thing these two movies have in common is that the protagonists have been robbing trains and stagecoaches and banks for so long that hordes of Pinkertons are hot on their trails.

3:10 to Yuma tells the fictional story of Ben Wade (Russell Crowe) and his gang, who could be Butch Cassidy and the hole-in-the wall gang except that they are a bunch of sociopaths. The chief sociopath is Wade's sidekick (Ben Foster) who really should be seeing a therapist. He has issues, not the least of which is that he likes to kill people. Anyway, the Wade gang holds up a stage and shoots their chief Pinkerton pursuer (Peter Fonda). They would have got clean away except for the fact that Wade has to have a little thing with a barmaid (Vinessa Shaw) in town and hangs around until the posse arrives and arrests him. Also in the mix is a loser of a rancher (Christian Bale) on whose land the robbery took place and in whose house, Peter Fonda and the Pinkertons hide Wade from his gang. Bale has a beautiful wife (Gretchen Mol) and a teenage son (Logan Lerman). They both have some issues with Bale being such a loser. So he decides he will show them, and he volunteers to help take Wade to the train that will take him to prison. Yes, you guessed it. The train is the 3:10 to Yuma. Also joining the posse is the town vet (Alan Tudyk) who has nursed Fonda back to health. And needless to say, Bale's son follows them so that he can get into a lot of trouble later on, and, of course, be there for the denouement. I won't spoil it for you but there are some good gunfights, some yellow-bellied lawmen, some bad Indians, and lots of bad white men. And you know that at the end of the movie, one or both, or perhaps neither of Bale and Wade (Crowe) will be dead. 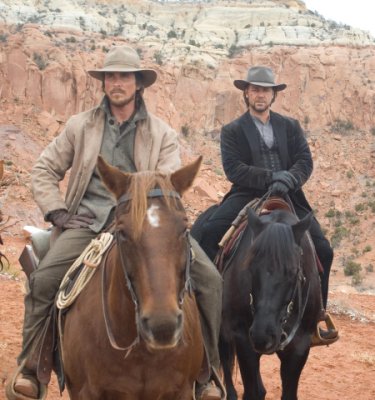 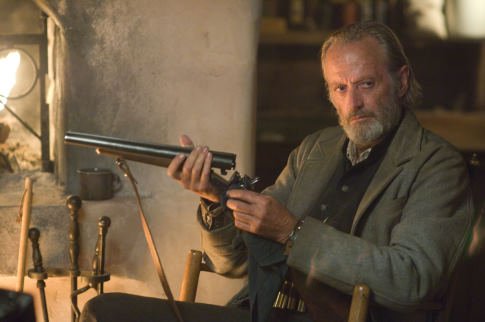 The Assassination of Jesse James by the Coward Robert Ford is about as descriptive a title as you'd want to have, and it would be a spoiler except for the fact that this is a true story (or at least inspired by true events), and so you already know that on April 3rd, 1882, while unarmed and standing on a chair to fix a picture, Jesse James was shot in the back and killed by "the coward" Bob Ford. There have been quite a few films made about Jesse James. Perhaps the most famous, made in 1939, starred Tyrone Power as Jesse James, Henry Fonda as his brother Frank, and John Carradine as Bob Ford. Jesse James has also been played by Roy Rogers, Clayton Moore (The Lone Ranger), Audie Murphy, Kris Kristofferson, James Keach, Rob Lowe, and Colin Farrell. Most of these films involved the James Gang and their infamous great Northfield raid during which most of their gang was caught or killed. This new Jesse James movie covers just the last six months of his life. Jesse (Brad Pitt) and his brother Frank (Sam Shepard) have recruited a new gang including two brothers Charlie (Sam Rockwell) and Bob (Casey Affleck) Ford. Other gang members include various cousins of the Fords and James (Jeremy Renner, Garret Dillahunt, Paul Schneider et al.). Half the time, I couldn't keep track of who was who beyond Jesse and the Ford boys. The gang pulls one last train robbery and then they split up. Frank goes to Baltimore and Jesse moves his wife (Mary-Louise Parker) and kids to a new town. There is a lack of trust between Jesse and the gang, and also between the various gang members themselves. In fact, Bob Ford had made some kind of agreement with the Pinkertons and the governor of Missouri (James Carville) to kill Jesse. They all spend a lot of time traveling to find each other and kill each other. After Jesse is killed, the movie follows the life of Bob Ford to its unhappy and violent end. 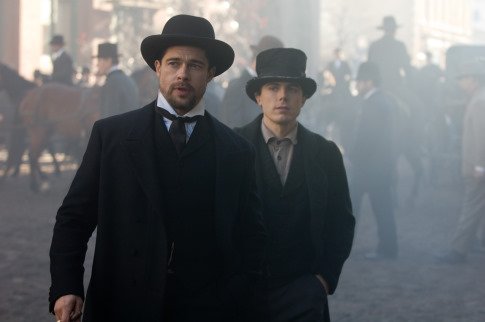 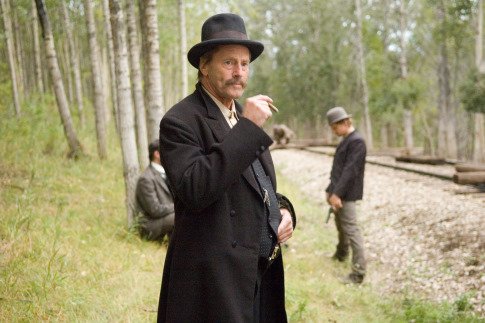 The Assassination of Jesse James by the Coward Robert Ford is beautifully shot (near Calgary so the mountains are a bit bigger than you would expect in Missouri). The cinematography (it is nominated for an Oscar) is wonderful, full of snow, fog, clouds, and smoke. You get the idea. There's a very nice score by Nick Cave. Jesse James is almost like a very expensive documentary. There's even a narrator (Hugh Ross) to tell you what is happening. Unfortunately, even the narrator couldn't really help me keep track of the subplots when all the James and Ford cousins start killing and being killed. I guess I didn't care. The film runs 2 hours and forty minutes and feels every bit that long. I am worried that there must be a lot more scenes which I fear might appear in a director's cut. For one thing, the wonderful Mary-Louise Parker (Angels in America, West Wing, Weeds) only appears in a few scenes and has almost no dialog. I feel like there is something on the cutting room floor. Another very good actress, Zooey Deschanel (Tin Man, Hitchhikers Guide to the Galaxy) is in only one scene at the end of the movie as Bob Ford's girlfriend. They are both sorely wasted. And sadly, the wonderful Sam Shepard who plays Frank James, leaves early on, never to appear again. I mentioned that James Carville plays the Governor. In case you are wondering, it is "the" James Carville. The gang are played by a bunch of familiar faces. Garret Dillahunt seems to be in everything I watch these days, e.g., John From Cincinnati, The Sarah Connor Chronicles, and No Country for Old Men.

The main actors, Pitt, Affleck (nominated for an Oscar), and Rockwell are all good, but I was mostly unmoved by their performances and by the movie itself. One reason is that it took too long for the plot to wend its way to the ending that is no surprise to anyone. Also, the plot is perplexing. In real life, Jesse James kept the Fords around because he thought they were the only ones he could trust. But in the movie, it's so obvious to everyone, including Jesse James that they are the least trustworthy guys you could imagine. So you can't understand why he keeps them around and doesn't just shoot them like he does everyone else. The way it plays out, you feel that James wants to die and sets up the situation so that Bob Ford can kill him. And I got so lost with the subplots that make up the middle hour of Jesse James, that I got lost and lost interest. It's a pity because it is a beautiful film.

On the other hand, 3:10 to Yuma is a lot of fun. It doesn't take itself too seriously even though most of the characters are dead by the end. And the plot moves right along. The film is actually based on an Elmore Leonard short story. Russell Crowe is perfect as the Butch Cassidy-esque bad guy, and Christian Bale does a good job as the hard-luck rancher with something to prove. Ben Foster really enjoys himself playing the part of the pretty, but deadly sidekick. And Peter Fonda is great as the Pinkerton who is too tough to kill. Mostly, 3:10 to Yuma is a rollicking good time. And the ending, which I won't spoil for you, is pretty satisfying.

Maybe it was the directors. James Mangold who directed 3:10 to Yuma is very experienced (Walk the Line, Cop Land) while Andrew Dominik, the director of Jesse James, only has one minor film under his belt. Maybe Dominik's producer, a.k.a. Brad Pitt was too obsessed with making a great art film. I hear that he had a clause in his contract that said that the name of the movie could not be changed for any reason. Both movies are worth seeing but if you are looking for a movie to rent on Saturday night, I'd take the 3:10 to Yuma.