Indiana Jones and the Kingdom of the Crystal Skull

Spoiler Alert! If you don't want to know whether it had to be snakes or who is Henry Jones III, then read no further.

Things have been pretty screwed up lately around the globe. But I'm happy to say that all is now right with the world. Indiana Jones has come back to save it. And he does it very well. All those internet rumors about this new, fourth installment of the Indiana Jones series were unfounded. Indiana Jones and the Kingdom of the Crystal Skull is just what a summer movie ought to be, lots of fun. Almost 20 years have passed since Indiana Jones and the Last Crusade both for us and for Indy. For him, it is now 1957 and Russians have replaced the Nazi's as the bad guys. 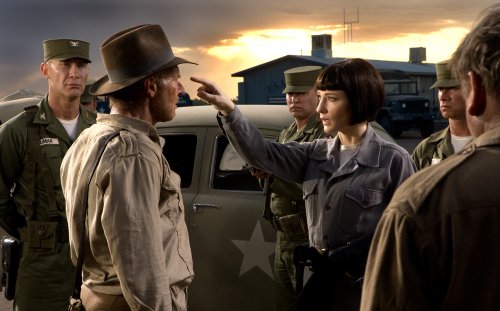 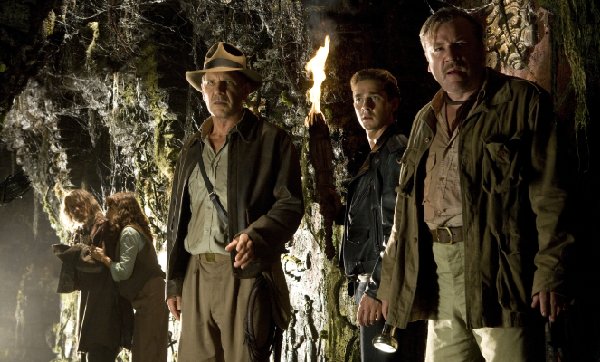 Led by a beautiful but deadly pseudo-scientist (Cate Blanchett) with a cute eastern Ukrainian accent, a bunch of KGB agents arrive at a top secret base in the American southwest just as an H-bomb test is about to take place. Their mission is not the H-bomb, but rather a large warehouse that will be familiar to anyone who saw the last scene of Raiders of the Lost Ark. But they aren't looking for the Ark of the Covenant (which makes a cameo appearance in a strangely unblackened crate (Thanks Martha)). They are looking for another box containing, oh gee, I won't spoil it for you. The KGB boys have kidnapped Indy (Harrison Ford) and his new sidekick (Ray Winstone) because they supposedly know where the "thing" is. Much punching, shooting and whipping ensues. Oh yes, the whip is back and so, of course, is the fedora. And you have to see how Indy survives the H-bomb blast. But soon Indy is back at Yale teaching his class. Apparently he is one of those professors who is always out of town during the semester because he is soon on the run with both the FBI and KGB on is tail. He is helped along by a young man (Shia LaBeouf) who has come to get Indy's help in rescuing his mother (Karen Allen). Yes, another happy thing about Indy4 is that Marion Ravenwood is back! You'll have to guess how that makes LaBeouf related to Indy. They are soon off to Peru, dodging the KGB, only one snake, ancient booby traps, and lots of cobwebs, as they try to find/return the crystal skull to its rightful place. Ok, I won't spoil anymore of it for you, but they do work Roswell and Erich von Däniken into the plot. Speaking of von Däniken, crystal skulls are real, sort of. They are claimed to be authentic Mesoamerican artifacts, but are thought to be 19th century fakes. 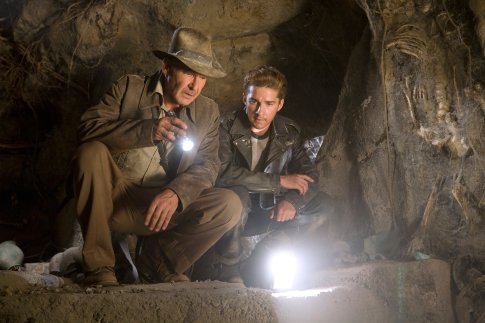 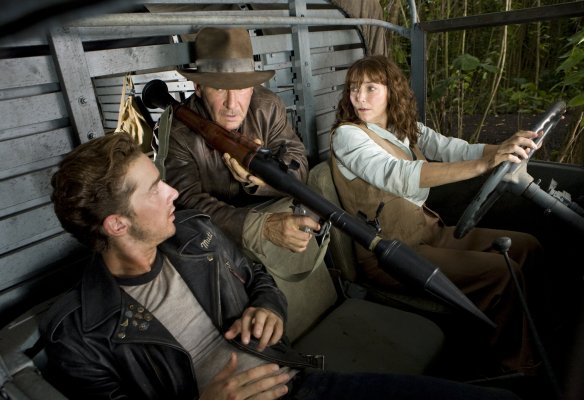 Like almost every movie made these days, there are a bunch of old-pro British character actors playing most of the supporting roles. Indy4 is no different. Besides Ray Winstone as Indy's sidekick, Jim Broadbent plays the Yale Dean, replacing Denholm Elliott who died in 1992, and John Hurt plays a crazy old colleague of Indy's who finds the crystal skull. Hurt is sort of replacing Sean Connery who played Henry Jones Sr. in Indy3. Connery is not dead but turned down a role in Indy4, saying that he has retired. Anyway, they killed off his character. The hard working Winstone (The Departed, Sexy Beast), who was digitally buffed for Beowulf, shows off his true physique here. LaBeouf and Blanchett are the only ones looking buff. Everyone in Indiana Jones and the Kingdom of the Crystal Skull is good, but some roles are better than others. The versatile Jim Broadbent (Moulin Rouge, Gangs of New York) is pretty much wasted as the new Dean, as is Cate Blanchett who plays the less than one-dimensional bad guy. Don't get me wrong, Blanchett is very good as a one-dimensional bad guy.

As with the three earlier movies in the series, Indiana Jones and the Kingdom of the Crystal Skull was directed by Steven Spielberg and produced by George Lucas. These guys have teamed with Harrison Ford on some of the highest grossing films of all time. But Harrison Ford is just amazing. Besides playing Han Solo and Indiana Jones, he was also Jack Ryan in the first two Tom Clancy movies, and he stars in several of my fav movies, Blade Runner, Witness, Regarding Henry, The Mosquito Coast, Working Girl, and The Fugitive. But it's been 15 years since The Fugitive came out and Ford has made some forgettable movies since then. So it's nice to see him back as Indiana Jones. Spielberg and the writers have done a good job. Indy acts his age, although he still looks pretty good. The other joy of the new Indy movie is the return of Karen Allen. She played Marion in Raiders of the Lost Ark, then quit or got fired, and disappeared down a black hole, except for starring in the wonderful movie, Starman. Allen and Ford are fun together, and LaBeouf fits in very well too. LaBeouf is pretty hot stuff. He had his breakout last year with Disturbia and Transformers, and now he's in Indy4. He's very good, and when you see the last scene of Indiana Jones and the Kingdom of the Crystal Skull, you'll be thinking sequel. They do it in a very cute way. That's the nice thing about this movie. It's not great or flashy, it just feels good. Don't wait for Netflix, go and see it in the theatre.