I don't usually go to this kind of film. What kind of film is this? Well, it's the Godzilla genre, where some sort of radiation or toxic spill, usually caused by mad scientists, creates a monster. The Host has had a lot of buzz on the film festival circuit and the trailer looked fun so I went to see it. It was made in South Korea and is subtitled, except for a couple of Americans who have small roles. The plot follows the Godzilla playbook pretty closely. An evil US pathologist (Scott Wilson), who is working in a South Korean morgue (no explanation given for what he is doing there), orders an assistant to pour a huge number of bottles of formaldehyde down the drain because the bottles are dusty. Like I said, he's evil. Anyway, the assistant does as he is told and then well, alia iacta est, as Julius Caesar said as he crossed the Rubicon. The scene shifts to four years later and we are introduced to a typical dysfunctional Korean family. They run a 7-Eleven type store down by the Han river in Seoul. The patriarch (Byun Hee-bong) is the least dysfunctional of the group and he tries to keep things running on an even keel. His son (Park Hae-il) is a slacker who is also single parent to a young girl (Ah-sung Ko) (pictured below). His daughter (Du-na Bae) is an olympic level archer (also pictured below) who chokes in the big events. Everything is sort of normal until one day when the father and daughter are walking by the river, people are looking at something weird hanging from underneath the bridge. It falls off into the water and then suddenly shoots out of the water and starts chasing and eating people. The monster (pictured below) has arrived. It doesn't eat the little girl but takes her away to its lair, deep in the sewers of Seoul. The authorities seem unable to help, so the little dysfunctional family goes off in search of her. 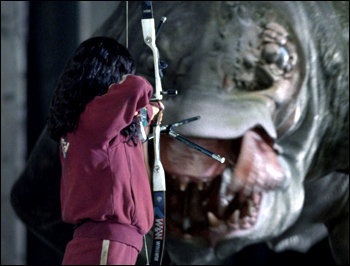 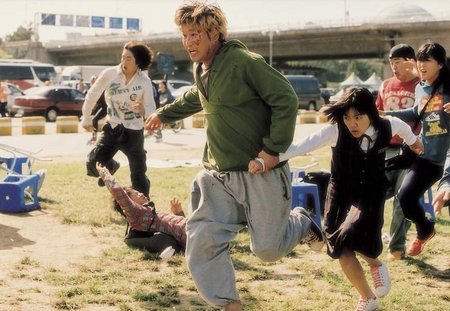 I have to say that The Host was pretty disappointing. I had expected it to be cleverer, more of a riff off a monster movie rather than just a straight monster movie. But the monster is great. He was designed by WETA, which is Peter Jackson's Industrial Light and Magic. And he is nice and slimy and moves very well. He looks like a giant misshapen fish with legs and a lot of tails. Unfortunately, other than the monster, The Host is a bit dull and boring. The little girl is quite good as the plucky hostage of the monster, but the rest of the family are just clueless. The two Americans are quite recognizable character actors. Scott Wilson, who plays the evil doctor, has appeared in many movies, including In the Heat of the Night. He is best known at present as Sam Braun, father of Marg Helgenberger on CSI. Also appearing is Paul Lazar, who was one of the bug geeks in Silence of the Lambs. Here, he seems to be from WHO or some such UN organization. Speaking of Peter Jackson, The Host reminds me of Bad Taste, his first film that he made with his mates while at university. The Host has much better production values but that's the result of Final Cut Pro. Now everyone (no, not you John!) can make a really bad movie that looks good.