Below is a picture of the original sign above Hollywood, built in 1923. The last four letters were removed in 1949. 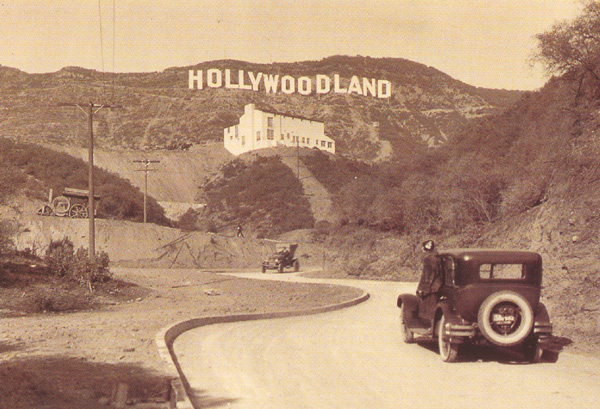 It's a weird coincidence that these two movies came out a week apart, both set in Los Angeles, one in 1947 and the other in 1959, one called Hollywoodland and the other with scenes showing the Hollywoodland sign. Both films have as their starting points, the violent death of a real person. In the case of Hollywoodland, it is the suicide of George Reeves who played Superman in the 1950's TV show. In The Black Dahlia, it is the gruesome murder of Elizabeth Short, a beautiful, young would-be actress. I say "starting points" because, beyond the setting the scene, the actual facts surrounding these two violent deaths are superfluous. Both films create fictional characters in a fictional story surrounding these real deaths.

Hollywoodland purports to be an investigation of the mysterious events surrounding the apparent suicide of George Reeves (Ben Affleck). He shot himself while his fiancée (Robin Tunney) was downstairs with some friends. Conspiracy theorists have suggested that perhaps Reeves was murdered by his fiancée or someone, and Hollywoodland invents a private detective (Adrien Brody) to look into the facts of the case. As he follows up leads, we follow the last few years of Reeves' life through flashbacks. He was a little-known actor whose chief claim to fame was a small part in Gone with the Wind until he signed on to play Superman. It was an unexpected hit especially among young kids like me. But once The Adventures of Superman went off the air, Reeves had trouble finding work. He had been having a long affair with the wife (Diane Lane) of a movie mogul (Bob Hoskins), but broke it off when he met Tunney. Brody's character is a total screw up. He and his girlfriend (Caroline Dhavernas) take people's money but don't do much investigating. He is also trying to deal with his ex-wife (Molly Parker) and young son. His investigation of Reeves' death consists mostly of him getting beaten up wherever he goes. By the end of the movie, he comes to the surprising conclusion that Reeves probably killed himself.

The Black Dahlia tells the story of two fictional police detectives (Aaron Eckhart & Josh Hartnett), known as Mr. Fire and Mr. Ice, who are investigating the real-life murder of the young would-be actress, Elizabeth Short (Mia Kirshner). Her murder is real. The detectives are not. As well as investigating the murder, the detectives get involved with two women, one a rich heiress (Hilary Swank), who dresses in black like the murdered woman, and a young woman (Scarlet Johansson) saved from the clutches of an evildoer by Eckhart. Swank still lives with her parents' (Fiona Shaw & John Kavanagh) in their mansion but she goes to a cheap motel for her liaisons. In addition to the main plot, there are various murky subplots involving Eckhart, Swank, her parents, Johansson and her past. There is even a scene in a lesbian bar with K.D. Lang doing a big production number. There are twists and turns a plenty, and some of these characters will not still be alive by the end of The Black Dahlia. As with George Reeves in Hollywoodland, we only see Elizabeth Short in flashbacks, except when she's dead. The gore is limited but I should warn you that there are a few creepy scenes.

I know you will be shocked to find out that I am going to be a bit of a contrarian with my review of these two films. While most reviewers liked Hollywoodland much more than The Black Dahlia, I disagree. The Black Dahlia is an interesting film that kept my interest right up to the end. Brian De Palma really knows how to make a film noir, and the script, from the book by James Ellroy (L.A. Confidential), really crackles. The Black Dahlia is film noir like they don't make anymore. The cinematography and the music make you feel like it's a movie made in the 1940's. And even though The Black Dahlia feels like Los Angeles in the 1940's, it was shot in Sofia Bulgaria. The cast is great. Hartnett and especially Eckhart really shine. The great thing about Eckhart (Thank You for Smoking) is that he always seems to be having such a great time with his roles. Hartnett (Pearl Harbor, The Virgin Suicides) is as stolid as ever, but he makes a good foil for the manic Eckhart. Johansson, a.k.a. the busiest actress in Hollywood, makes the most of the "girlfriend" role. Swank (Million Dollar Baby, Boys Don't Cry) gets to wear girly clothes for a change and has a lot of fun as the nympho, creepy, rich girl. Also nicely spooky is Mia Kirshner (Exotica, 24) who plays Elizabeth Short. Her few scenes paint a nice picture of a good girl gone bad.

Hollywoodland just never aroused my interest. On paper, it has a more impressive cast than The Black Dahlia, having two Oscar winners, Brody and Affleck, and two Oscar nominees, Lane and Hoskins. But first of all, unlike the truly unsolved Elizabeth Short murder, Reeves' suicide is not really in question. Besides, he's kind of a boring guy, especially as played by Ben Affleck. I don't know what Reeves was really like but Affleck plays him as a stuffy snob. There has been some buzz about Affleck's performance but I think it was just bad. On the other hand, I quite like Adrien Brody, but he always comes across as a bit goofy, which he somehow made work in The Pianist but not so much in King Kong. In Hollywoodland, he's supposed to be a goof, but then he's supposed to suddenly change. I didn't buy it. I love Diane Lane, and she tries to inject some pizzazz into Hollywoodland but her character is a bit flat. And Bob Hoskins plays Bob Hoskins which he does very well. Molly Parker (Deadwood) is totally wasted here in the worst kind of "wife" role. It was nice to see Joe Spano who played Detective Henry Goldblume on Hill Street Blues lo these many years ago. I still miss that show.

Hollywoodland was directed by Allen Coulter, a TV director of such shows as The Sopranos, and Sex and the City. Hollywoodland has the feel of a TV movie. It has none of the atmosphere and energy of The Black Dahlia which was directed by De Palma (Carrie, Dressed to Kill, Body Double, The Untouchables). He knows how to make a film noir. As Sam Spade would say, "You getting this alright, son, or am I goin' too fast for ya?"