Harry Potter and the Order of the Phoenix

It seems like it is Harry Potter 24/7 this month. The seventh and final book in the series comes out tonight, and in the theatres is the fifth installment, Harry Potter and the Order of the Phoenix. It seems like just yesterday that the first Harry Potter movie, The Sorcerer's Stone, came out. The kids at age 11 look like such babies when you see them now (below left). Today, our hero Harry Potter (Daniel Radcliffe) and his two buddies, Ron (Rupert Grint) and Hermione (Emma Watson) are 17 years old and all grown up (below right). 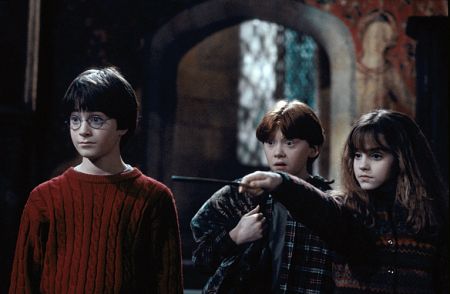 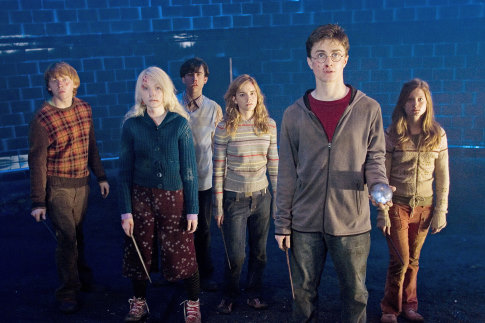 Things take a serious turn at the end of book/movie four when Cedric Diggory is killed. This serious tone continues into The Order of the Phoenix. He-who-shall-not-be-named (Ralph Fiennes) is back and is reforming his army of Death-Eaters (Jason Isaacs et al.). So two new organizations are formed to fight him. The good wizards and witches, including Sirius Black (Gary Oldman), Dumbledore (Michael Gambon), Mad-Eye Moody (Brendan Gleeson), Remus Lupin (David Thewlis) and, of course, the Weasley's (Mark Williams & Julie Walters), organize The Order of the Phoenix and hide out in a flat in London that is extremely narrow. They are joined by a new character, Nymphadora Tonks (Natalia Tena) who doesn't do much but change her hair color in this film, but has a bigger part in number six. New on the Death-Eater side, is Sirius Black's crazy cousin, Bellatrix (Helena Bonham Carter). Things are not going well at Hogwarts either. The Ministry of Magic led by Cornelius Fudge (Robert Hardy) is engaged in a cover up of the fact that Voldemort is back and the dementors are roaming the countryside. Dumbledore is replaced as Headmaster by Fudge's stooge, Dolores Umbridge (Imelda Staunton) who tries to keep the students from learning anything about magic whatsoever. So the students band together under Harry's tutelage and form Dumbledore's Army. 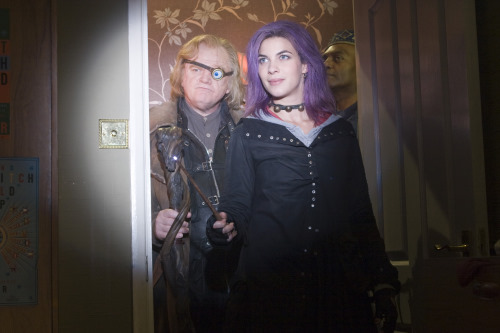 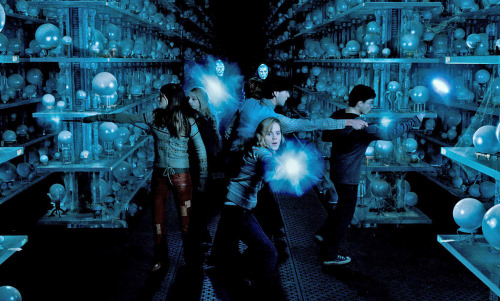 Besides the serious tone and the fact that major characters start getting killed off, the big change from the first four books/movies is that instead of the odd spell being cast here and there, there are pitched battles between the good and bad wizards. And the books also get longer and longer. The Order of the Phoenix is 870 pages. Needless to say, some cuts had to be made in the story to fit the movie into 2 hours and 18 minutes. There were a few cuts to The Goblet of Fire but major cuts had to be made in the new film. As a result, many of the galaxy of British stars who make up Hogwarts (Robbie Coltrane, Maggie Smith, Emma Thompson etc. etc.), are barely afforded a line or two. And despite the big kiss, Cho's (Katie Leung) role is reduced to almost nothing. Thankfully, Snape (Alan Rickman) still has a big part. Stripped down, The Order of the Phoenix concentrates on Harry and we lose a lot of the subplots. One that I was happy to lose most of, involves the house elf at the London flat. It's not Dobby, thank God, but he's almost as bad.

The three main actors, Radcliffe, Watson and Grint have definitely improved over time and give good performances here, particularly Grint who does a good job with Ron, a character that I have never liked. Everyone else is great, of course, although Bonham Carter is a bit over the top. I particularly like Matthew Lewis who plays Neville, and Evanna Lynch who plays Luna Lovegood. The Order of the Phoenix has yet another director. It's a bit like being the Defence Against the Dark Arts teacher at Hogwarts. David Yates (The Girl in the Café) is the fourth director in five films. But he is slated to come back for the sixth installment, The Half-Blood Prince. Yates does a good job moving the story along and building towards the thrilling climax, a battle between Dumbledore's Army and the Death-Eaters, and more particularly, between Harry and Voldemort. The battle scenes are well-done. There are two people listed in the credits for "wand combat choreography." On the whole, the Harry Potter movies have been very satisfying, which is a difficult task since most of the moviegoers have read the books. So, if you haven't seen it yet, put down, Harry Potter and the Deathly Gallows for a couple of hours and see The Order of the Phoenix.