Spoiler Alert! If you don't want to know what "happens," read no further.

M. Night Shyamalan rocketed to fame when the third feature film that he wrote and directed, The Sixth Sense, grossed almost $300 million in the US. Since then, his trademark twisty-ending films (Unbreakable, Signs, The Village, Lady in the Water) have had mixed reviews. He always writes and directs his films. And the stories, besides the surprise endings, are always strange. But the big stars (Bruce Willis, Samuel L. Jackson, Mel Gibson, Joaquin Phoenix, Paul Giamatti) line up to act out roles written by Shyamalan with them in mind. 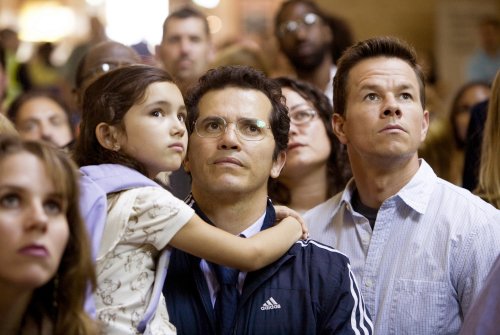 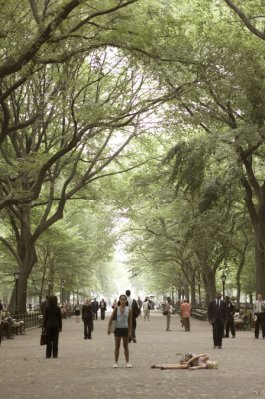 In Shyamalan's new film, The Happening, something strange starts "happening" to people in the northeast US. It begins in Central Park. Suddenly, all of the people there stand still and then look for interesting ways to kill themselves. Whatever it is that is making people do this, spreads throughout the city as people commit suicide in grosser and grosser ways. Everyone in New York is gone pretty fast, so we look to Philadelphia for the heroes of our tale. A school teacher (Mark Wahlberg) and his wife (Zooey Deschanel) take off west to try and outrun whatever it is. Wahlberg's best friend (John Leguizamo) leaves his young daughter (Ashlyn Sanchez) with the couple while he goes on a doomed quest to find his wife. Everywhere they go, people start dropping like, well, flies. They have a theory that some sort of toxin is being released by plants when they feel pressured, threatened (?) by people. None of it makes much sense. Eventually, Wahlberg and Deschanel end up at a farmhouse where the scariest woman (Betty Buckley) in the world lives by herself. Do they survive? Is it the end of the world? Well, I won't tell except to say that this is the goofiest movie I've ever seen where millions of people die horribly. 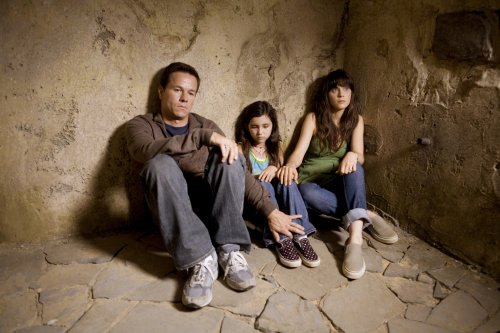 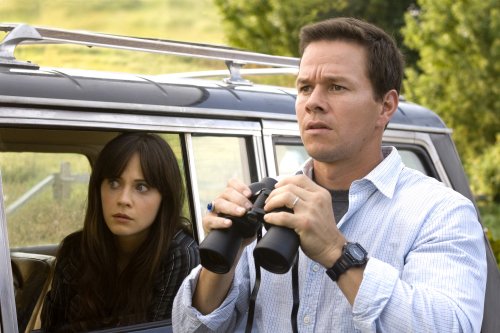 The casting of this film, particularly Zooey Deschanel, would be weird if this were a normal end-of-the-world horror movie. Deschanel specializes in quirky Indie roles like All the Real Girls, The Good Girl, and Flakes. But in The Happening, she and a very goofy Mark Wahlberg (The Departed, The Perfect Storm) do a good job of being the witnesses to the bizarre and silly carnage around them. Speaking of carnage, I should mention that The Happening is very very bloody. Shyamalan doesn't pull any punches with the constant suicides and sometimes homicides. It is very graphic. I closed my eyes a lot. The only thing missing from The Happening to make it a complete farce is zombies. But there is Betty Buckley as the silliest, scariest thing ever, so maybe we don't need zombies. (She is best known for winning a Tony as Grizabella in Cats.) Shyamalan's trademark cameo appearance is also goofy. He always has a cameo a la Hitchcock. But in The Happening, according to the end credits, he is Joey, the guy who is always calling Deschanel on her cell. We never see or hear him.

On the whole, I have liked Shyamalan's films even Lady in the Water. Ok, Signs not so much. But The Happening is in many ways the weirdest of the bunch. My seat mate at the movie, Orsola, really liked it. I was up and down about it all the way through. Shyamalan's previous movies were weird but they were meant to be taken at face value. But The Happening can only be taken as a Turantino-type satire on the genre of B-movie horror flicks. Turantino's movies never totally work for me and The Happening doesn't totally work for me either. It's definitely a movie you have to see for yourself and then decide for yourself whether it's a cool satire or just stupid.