First, I just want to say how much I love the guys pictured below, Michael McKean, Harry Shearer and Christopher Guest. From This is Spinal Tap to A Mighty Wind, this threesome, along with their compadres, Eugene Levy, Catherine O'Hara, Fred Willard, Parker Posey, Jane Lynch et al., make up a formidable (the most formidable?) ensemble cast. Most of them trace their roots back to Second City or Saturday Night Live. Every few years, Guest and Levy write a script, call up the other players and they make a movie. In addition to This is Spinal Tap and A Mighty Wind, they also did Waiting for Guffman and Best in Show. Much like Woody Allen and the Coen Brothers, their work is wildly improvisational and wildly uneven. Some of it is hilarious, and some of it, well, isn't. But you don't want them to stop doing it. 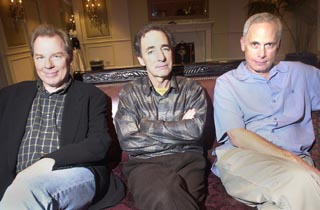 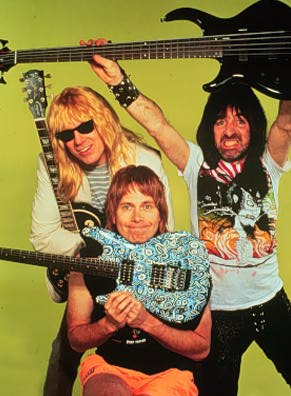 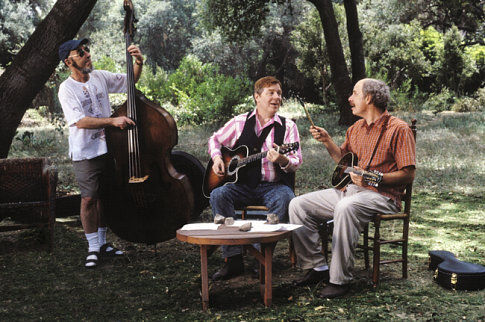 The new film by Guest et al. is For Your Consideration. The title comes from the ads that appear in Variety around Oscar time touting various films. So this year, we will undoubtedly get an ad that says, " For your consideration, For Your Consideration." In the movie, a second-rate director (Christopher Guest) and some second-rate actors are making a movie called, "Home for Purim." (See picture below right.) Purim is one of the more obscure Jewish holidays. Anyway, in the movie within a movie, an elderly sickly mother (Catherine O'Hara) and her husband (Harry Shearer) await the arrival of their grown-up children (Parker Posey & Christopher Moynihan) for the holiday. Posey arrives with her lesbian partner (Rachael Harris). Also present in and around the set, are the movie's writers (Michael McKean & Bob Balaban), the producer (Jennifer Coolidge), a couple of studio executives (Larry Miller & Ricky Gervais) and Harry Shearer's agent (Eugene Levy). All hell breaks loose when a movie blog mentions that there might be Oscar buzz for the actors in "Home for Purim." Then the stars (Fred Willard & Jane Lynch) of an Entertainment Tonight look-alike show start talking about the movie. (See picture below left.) And there are lots more characters around including John Michael Higgins and Ed Begley Jr. Even Sandra Oh (Sideways, Grey's Anatomy) shows up briefly. (One person who never appears in a Christopher Guest film is his real-life wife, Jamie Lee Curtis.) For Your Consideration naturally ends when the Oscar nominations are announced by real-life B-list stars, Claire Forlani and Hart Bochner. I won't spoil it for you by telling who gets nominated.

Unfortunately, For Your Consideration is not one of the hilarious Christopher Guest films. The script is not good. Of course, the scripts are not written to be funny per se. The characters in these films play it straight, and so it's a bit hit or miss whether it comes out funny. I thought half of Best in Show was funny and I really liked A Mighty Wind. And This is Spinal Tap is a classic. But For Your Consideration didn't really work for me. In fact, the only thing that made the movie interesting was seeing the great cast trying to do something with nothing. Harry Shearer, Fred Willard and Jane Lynch did the best. Harry can make any character work. And Fred Willard is always funny. But you could see in the eyes of all the characters that they were a bit desperate. It didn't help that I saw For Your Consideration at Siegen, where there were 3 people in the theatre including me. And on top of everything, For Your Consideration has the worst poster, with all the characters pasted into one picture. I'm worried that they did this on purpose. Oh well, as always, take what I say with a grain of salt. Some of my friends don't think that I "get" comedies. So maybe I missed something.