It's weird, but I'm pretty sure I have never reviewed a Jackie Chan movie. In fact, I think the only Jackie Chan movie I've ever seen is Shanghai Noon. I actually like him, and the trailers for his movies are usually funny but they don't really make me want to see them. The Forbidden Kingdom isn't the most typical Jackie Chan movie. In this new movie, a young man (Michael Angarano) living in New York city meets a strange old chinese man (Jackie Chan) with a magic staff, and before you know it he has been whisked to another time and place. That place is The Water Margin. There, the young man meets several heroes, the Silent Monk (Jet Li), Lu Yan (also Jackie Chan) and Golden Sparrow (Yifei Liu), and joins them to save the Monkey King (also Jet Li) from the clutches of the Jade Emperor (Deshun Wang ) and a nasty witch (Bingbing Li). Golden Sparrow is the obvious love interest and lucky for Angarano, her other character is a young woman in New York City. Almost everyone plays two roles except for Angarano who is the same dopey New York kid in both worlds. In New York, Angarano is an expert on Kung Fu movies. In The Forbidden Kingdom, he must actually learn to do Kung Fu. This movie is like Crouching Tiger Hidden Dragon crossed with Karate Kid crossed with A Connecticut Yankee in King Arthur's Court. 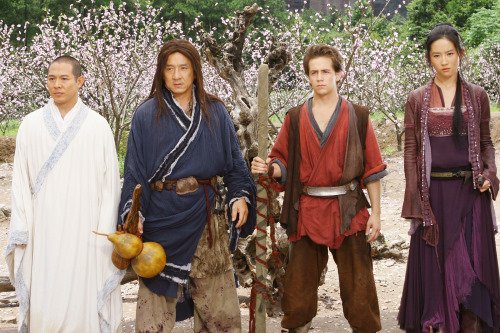 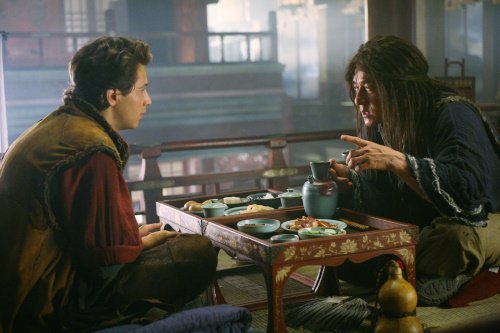 Like I said, I never see Jackie Chan movies but this one looked OK. And it is OK, although I got a bit bored halfway through. Chan is entertaining as always and does his usual funny stunts. The funniest bit in the movie is that his hero character loses his super powers if he is ever sober. So he has to drink wine 24/7. The plot, of course, makes no sense, but Angarano has to find himself, battle the Jade Emperor, free the Monkey King, all the usual coming of age stuff. He is pretty good as the Kung Fu Kid. I haven't seen him in anything before. Jet Li is, well, Jet Li and he does it very well. The final hero, Yifei Liu, is new to western films, but she is already quite famous in China even thought she is only 20.

The director of The Forbidden Kingdom, Rob Minkoff, has directed quite a few films, but they have all been animated (The Lion King, Stuart Little, The Haunted Mansion). His next movie, if you can believe it, is Mr. Peabody & Sherman. Is nothing sacred? Anyway, The Forbidden Kingdom is pretty much a cartoon. And Jackie Chan is certainly a cartoon character. It's not as funny as say Shanghai Noon because there's no Owen Wilson for Chan to bounce off of. This movie has the cute idea of whisking a Kung-Fu obsessed kid off to star in a Crouching Tiger Hidden Dragon where all the characters are somehow familiar. This cute idea has been used many, many times since The Wizard of Oz whisked Dorothy away from Kansas and back again. The Forbidden Kingdom is one of those movies that will work as a fairly entertaining Saturday night rental but I wouldn't rush out to see it in the theatre.