Flags of Our Fathers

The New York Times published a story recently about how lots of famous and successful directors, such as David Fincher (Se7en), Darren Aronofsky (Pi), and Spike Jonze (Being John Malkovich), have gone 5 years or more between movies. Then there's Clint Eastwood. He has directed four movies since 2003, including the two that came out in 2006. Those movies are Mystic River (Nominated for 6 Oscars including Best Picture and Best Director), Million Dollar Baby (Nominated for 7 Oscars, and Won Best Picture and Best Director), Flags of Our Fathers (Nominated for 2 Oscars), and Letters From Iwo Jima (Nominated for 4 Oscars including Best Picture and Best Director). Oh ya, and Eastwood is 76 years old. He even wrote the music for Flags of Our Fathers and Letters From Iwo Jima. These two movies tell the story of the battle of Iwo Jima from the points of view of the Americans and the Japanese, respectively. Both films were partially shot on location on Iwo Jima. The scenes below from Letters From Iwo Jima (left) and Flags of Our Fathers (right) both show the beach on Iwo Jima where the American landing took place with Mt. Suribachi in the background. 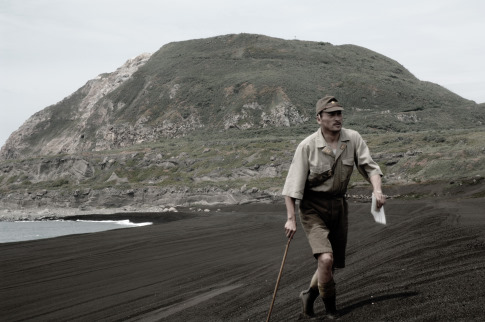 The reason that everyone knows and cares about this battle for a tiny island in World War II is that six marines were photographed raising a flag on Mt. Suribachi, and that photograph made this battle famous. The photograph is seen below left with President Truman and three of the soldiers who raised the flag. This scene was recreated in Flags of Our Fathers (right below) with Doc Bradley (Ryan Phillippe), Ira Hayes (Adam Beach) and Rene Gagnon (Jesse Bradford). When the photograph appeared in every newspaper in the United States, these three soldiers were sent home to help sell War Bonds. The other three soldiers in the photograph were killed in the battle. Most people, at least before they saw these two films, probably didn't know that the flag raising that was photographed was actually a second flag raising, and that the flag was raised on day five of a battle that lasted forty days. 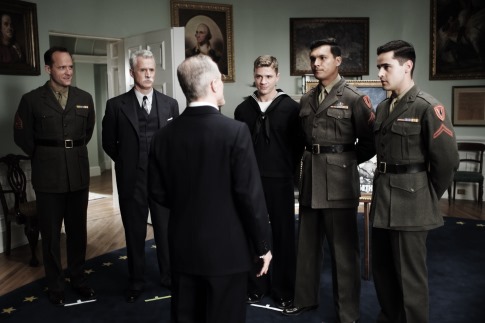 Flags of Our Fathers follows the story of these three soldiers as they go from the Oval Office to Yankee Stadium to Times Square to Soldier Field for huge rallies to sell the much needed War Bonds. Their handlers are a Marine officer (John Benjamin Hickey) and an official (John Slattery) from the Treasury department. As the story unfolds, each of the soldiers has flashbacks to the horrors of the battle of Iwo Jima. They are all having trouble dealing with their memories of battle, especially Ira Hayes, a Pima Indian who has to deal with prejudice on top of everything else. Besides Phillippe, Bradford and Beach, there are lots of familiar faces in their unit that hits the beach including Robert Patrick (T2), Jamie Bell (Billy Elliot), Neal McDonough (Band of Brothers) and Barry Pepper (Saving Private Ryan). An additional layer of time lies on top of this story as we flash forward to see Doc's son (Tom McCarthy) interviewing people today about the events of 60 years ago. He is the author of the book, Flags of Our Fathers on which the movie is based.

The second film, Letters from Iwo Jima tells the story of the battle from the point of view of the Japanese soldiers doomed to defend the island from the onslaught of the Americans. They were led by General Kuribayashi (Ken Watanabe), a well-educated officer who had spent time in the United States. He knew that he and his soldiers were doomed. There would be no naval or air support. They were cut off from Japan. He decided to make the Americans pay a huge price for taking the island and created a vast network of caves and tunnels for his soldiers to shelter in and fight from. The 20,000 Japanese soldiers faced an invasion by 70,000 Marines. The Japanese were literally doomed. The Americans suffered 26,000 casualties including 7,000 killed. Of the 20,000 Japanese soldiers on the island, only a few survived. They were mostly killed or committed suicide rather than be captured. As its name suggests, Letters from Iwo Jima is based on letters written home by Kuribayashi and his men before the battle. Besides Watanabe as Kuribayashi, and the tank commander Baron Nishi (Tsuyoshi Ihara), the story centers on a young soldier (Kazunari Ninomiya) who was a baker in Japan and had to leave his pregnant wife to go to war. Letters from Iwo Jima is, with the exception of one scene with a captured American soldier, in Japanese with subtitles. One of few bad things about Letters from Iwo Jima is that the subtitles are very hard to read and distract from the action.

The battle of Iwo Jima has been made into films several times in the past. Ira Hayes, played in Flags of Our Fathers by Adam Beach, a Saulteaux Indian from Manitoba, Canada, was previously played by very non-Native Americans, Lee Marvin and Tony Curtis. Both of the new films are very good. Neither Flags of Our Fathers nor Letters from Iwo Jima are flag-waving pro-American war movies. They both underscore the lives of the soldiers who would rather be back home with their families but who are stuck in a horrifying battle. The soldiers aren't fighting for America or Japan. They are fighting to keep themselves and their buddies alive. This was true on both sides. The horror is much greater on the Japanese side as the soldiers realize that even if they aren't killed in battle, their commanders will order them to commit suicide. Both Kuribayashi and Nishi are portrayed as being good men who treat their soldiers well. But in the end, they have no choice but how to die. Ken Watanabe, who is well known for Hollywood roles such as Memoirs of a Geisha and The Last Samarai, gives a nice understated performance as does Ihara as Nishi. In Flags of Our Fathers, Phillippe, Bradford and Beach all do a good job but only Phillippe approaches Watanabe in giving a many layered performance. Barry Pepper who started his career with a great performance in Saving Private Ryan is my favorite Marine in Flags of Our Fathers.

Flags of Our Fathers is a big budget Hollywood movie with big special effects and a big story. Letters from Iwo Jima is small by comparison. It has an almost documentary style and the colors are so muted that you have to look hard to realize that it isn't in black and white. I think that Flags of Our Fathers has been reviewed a little less kindly because it seems like an old-time Hollywood movie. These two films are like two sides of the same coin. Even though they are very different films in style and content, taken together, they are much more powerful than if you see only one of them.