Take a look at this poster for Enemy At The Gates: 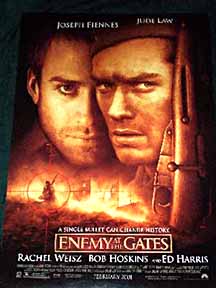 What kind of a movie do we have here?  Although, Joseph Fiennes and Jude Law seem a little too cozy here in this picture, they are really up there to attract the movie's most important demographic, Women!  According to all the polls, on date night, it is the woman who decides which movie to go to.  So what better to attract business than these two beautiful men. OK, I don't see it myself. I went to see Rachel Weisz. And besides, Exit Wounds beat Enemy At The Gates at the weekend box office. What's that all about? Anyway, Enemy At The Gates is set during the Battle of Stalingrad which was the turning point of the Second World War.  Jude Law plays a young Soviet soldier who can shoot straight who is built up into a heroic icon by a young political commissar (Joseph Fiennes).  Law becomes a sniper specializing in killing German officers.  Also in the mix is another young soldier (Rachel Weisz) who both Law and Fiennes fall in love with at first sight.  The Germans are none too happy about Law's sniping and bring in their own hired gun (Ed Harris) to take him out.  I had an all-Ed-Harris-all-the-time weekend since I also saw (the much better) Pollock.  Enemy At The Gates  becomes a cat-and-mouse game between Harris and Law building up to the inevitable final confrontation.  This film starts out pretty well but time seems to pass more and more slowly.  The movie is only a little over two hours long but it felt longer. And the plot is very predictable. The first scene, which sets the stage in the Battle of Stalingrad, which lasted about 6 months, is a little too much like the first scene in Saving Private Ryan (a much better war movie) and so loses some of its punch.  But the next scene, where terrified Soviet soldiers, only half of whom actually have guns, attack the Germans and then retreat only to be fired on by their own compatriots, is very intense.  But once we meet our ``heroes" the battle recedes and is only felt as distant explosions.  Law and Fiennes look good and do pretty well with their acting too. But there are way too many lingering close-ups particularly of Law.  Weisz also looks good but doesn't get to do too much with her part.  Ed Harris is always good but see Pollock if you want to see what he's really capable of.  Here, he just has to look grim and a bit emotionally distant. But then he's playing a sociopath.  There are two entertaining supporting roles.  Bob Hoskins does a very nice job playing Krushchev and Ron Perlman, most famous for his roles where he is unrecognizable (e.g., Quest for Fire, The Name of the Rose,  Beauty and the Beast), is very good as Law's sniper mentor.  I was distracted throughout the film by the soundtrack which sounded exactly like The Wrath of Khan.  Sure enough, the music was done by James Horner who did the music for Khan as well as over a hundred other movies.  Apparently, he's started repeating himself.  It's a small point but the ending credits are a bit too arty. They looked like someone in Graphic Arts school had done them as a term project.  Enemy At The Gates isn't a bad film but I think I lost interest because I knew exactly what was going to happen and then it did.