I think that Dreamgirls has had more buzz in the last year that any other movie with the possible exception of Borat. They showed a teaser trailer of Dreamgirls at Cannes which brought the house down. Of course, Dreamgirls is something of a known quantity since it was a hit on Broadway when it opened in 1981 and it went on to win 6 Tony awards. Like Chicago before it, Dreamgirls has some amazing music and comes to the screen with a built-in audience. It has been doing very well at the box office and will get some Oscar nominations. It has 5 Golden Globe nominations. Dreamgirls is a rare crossover hit with its all-black cast. Unlike Rent, which came to the screen with most of its original cast intact, it has been 25 years since Dreamgirls opened on Broadway, so it has an all-new cast. One original cast member, Loretta Devine, has a cameo in the movie. 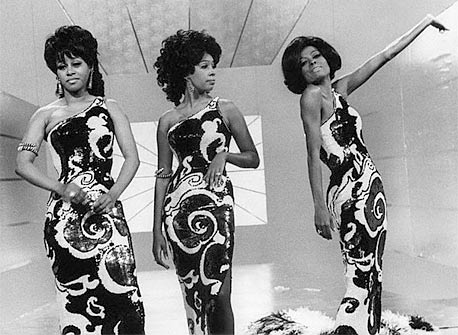 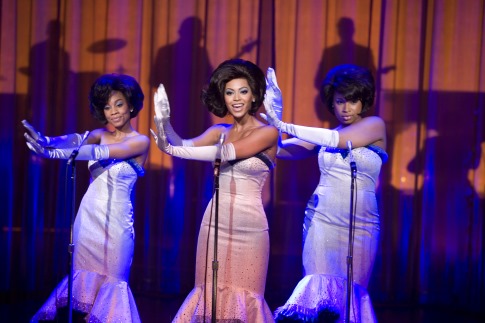 In case you've been living under a rock and don't know, Dreamgirls is loosely based on the story of Diana Ross and The Supremes. See the pictures above. In the movie, a young three-girl singing group (Beyoncé Knowles, Jennifer Hudson & Anika Noni Rose) are plucked from obscurity by an ambitious young agent (Jamie Foxx) to be backup singers to a James-Brown-like singer (Eddie Murphy). See the pictures below. Foxx steals the girls and Murphy away from a veteran manager (Danny Glover). All is well for a while, but Murphy keeps going off the rails James-Brown style, so The Dreamettes, as they are called, are renamed, The Dreams, and made into a headline act by Foxx, who wants to make them a hit with white audiences as well as black. He is also making the moves on both Beyoncé and Hudson, leaving the third singer for Murphy. Eventually, Foxx has to choose between his squeezes, and makes Beyoncé the lead singer and lead girlfriend, even though Hudson has the much better voice. Physique-wise, Beyoncé has the body of Diana Ross, while Hudson has the body of Aretha Franklin. Anyway, before you know it, Hudson has been replaced by a new (thin) singer (Sharon Leal). The careers of Beyoncé and Hudson diverge, with Beyoncé marrying Foxx and becoming a big star, while Hudson ends up as a single mother on welfare. But it doesn't end there. Of course not! This is a Broadway musical, damn it! The story follows the Broadway musical playbook very closely, so those who are up must be brought down and those who are down will rise up triumphantly. Needless to say, the audience is eager to see this happen and appreciative when it does. 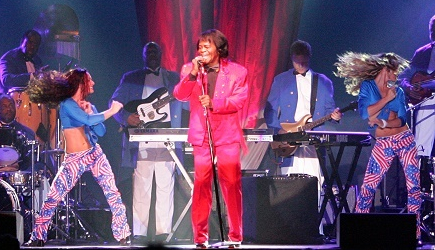 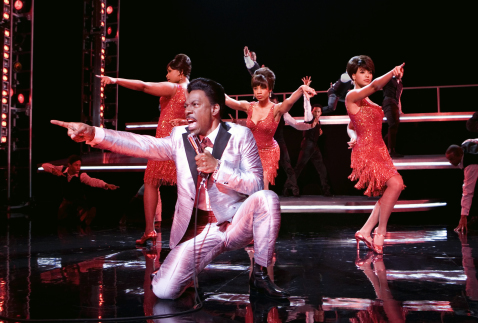 Since most of the characters in Dreamgirls are singers, you don't even notice that this is a musical until about half an hour into the movie when Jamie Foxx starts singing out in the street. But Dreamgirls is all about the music. And the music is really great. On top of that, the cast is full of strong voices. The main four voices, those of The Dreams, are all trained singers, Beyoncé, Hudson, Rose and Leal. While they are all very good, this is Jennifer Hudson's movie. She and her voice steal every scene she is in. Hudson was a finalist on American Idol and gained about 30 pounds for her role as the much put upon Effie. Beyoncé is much better known, but doesn't have a voice to match Hudson. However, Beyoncé sounds very good too. Among the male singers, Eddie Murphy does the best. He really throws himself into the role. This is a bit of a comeback role for him. He hasn't had much success recently except for being the voice of Donkey in Shrek. Dreamgirls is a bit of a comeback role for Danny Glover too. It's nice to see him. Jamie Foxx is good in the acting but his voice is a bit weak. Remember that in Ray, he was lip synching. Watch for John Lithgow in a small cameo as a slimy movie director.

The movie version of Dreamgirls is directed by Bill Condon. It's a bit of departure for him after Kinsey, and Gods & Monsters. He didn't change the staging much from the stage version. They drop in a few scenes like the Detroit riots but mostly the story takes place onstage, backstage, and in the recording studio. The music is really great but the book is a bit weak. So much of the musical is devoted to singing that there isn't that much time for character development. So the characters are a bit comedies and the story is very predictable. Only Jennifer Hudson and Eddie Murphy really get something interesting out of their characters. In particular, Beyoncé's character is a complete cipher. But who cares? When Hudson as Effie starts singing, nothing else really matters. Dreamgirls makes you feel good.