It used to be that movie makers with no imagination would remake movies that were made 30, 40, or 50 years ago. But then someone got the bright idea of remaking recent foreign films that American audiences never saw because they had subtitles. Why wait 30 years, let's make it now! So suddenly we had The Ring (2002), a remake of Ringu (1998) and lots of others. Now we have The Departed directed by Martin Scorsese, just opening this weekend which is a remake of Infernal Affairs (2002) written and directed by Wai Keung Lau. (By the way, I'm one of those people who never saw the Chinese version, so I had to rent Infernal Affairs and watch it this weekend.) These new remakes tend to be really that, almost carbon copies, rendered into English and starring big name Hollywood stars. Below, are the two main characters, a bad cop working undercover for the mob (Matt Damon and Andy Lau, on the left of both pictures), and a good cop working undercover with the mob (Leonardo DiCaprio and Tony Leung, on the right). Many scenes are identical in both movies. These pictures are from scenes on the rooftops of Boston (left) and Hong Kong (right). I'm not giving anything away. The good and bad cops are good and bad from the beginning to the end of these movies. 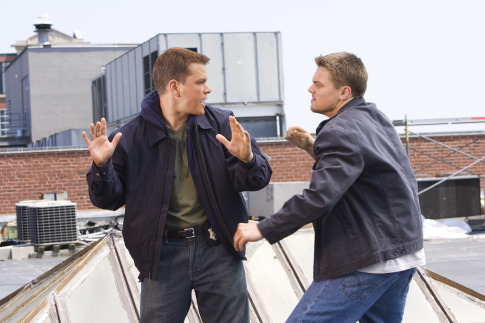 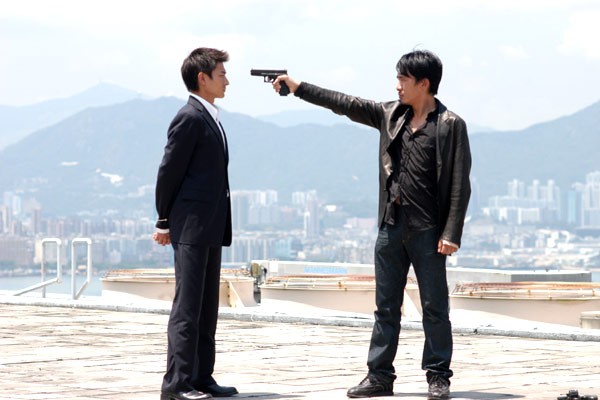 The first difference, you can see right away, is that people in Hong Kong are much snappier dressers than people in Boston. But first, the similarities. Both films tell the same story. Two young men grow up in the same neighborhood and go to the police academy. One (Leonardo DiCaprio and Tony Leung) is recruited as an undercover cop and they pretend to boot him out and send him to prison to make him seem bad. He soon hooks up with a bad gang led by a very bad guy (Jack Nicholson and Eric Tsang) and starts feeding information to the cops. The other young man (Matt Damon and Andy Lau) hooked up with the gang while still a boy and was sent to the academy to be an informer for the gang. Since this is a movie, the two young men soon end up trying to find out who is the informer working for the other team. Obviously, the Jack Nicholson character is the mentor for the bad cop and his mirror image at police headquarters (Martin Sheen & Anthony Wong Chau-Sang) is the mentor for the good cop. It gets a bit complicated beyond this since the two movies aren't exactly the same. The police chief has an assistant who dies early in the Chinese version while he (Mark Wahlberg) has a meatier role in The Departed. The most confusing thing for me was the girlfriends. In Infernal Affairs, Lau and Leung each have their own girlfriends, although Lau's girlfriend is also Leung's therapist. But in The Departed, the therapist girlfriend is the same person (Vera Farmiga) for both cops. This makes the Alice-Through-the-Looking-Glass world perfectly symmetrical. Even though these movies are telling basically the same story and quite a few scenes are identical, there are big differences including the ending. Rounding out the cast of The Departed are Alec Baldwin as the head of the police group chasing Jack Nicholson, and Jack's gang (Ray Winstone, Mark Rolston and David O'Hara).

But back to the lack of imagination. This is Martin Scorsese we are talking about. What gives? Why is he doing a remake? I dunno. But he does a very good job with it. In fact, I give The Departed the nod as being the best of the two movies. It would have been an easier decision if The Departed had been made without Leonardo DiCaprio. What is it with Scorsese and DiCaprio? I would take Tony Leung over Leonardo DiCaprio any day of the week. DiCaprio is playing basically the same character he played in Gangs of New York which is much better than him playing Howard Hughes. He's OK but he doesn't have a lot of range. He just sits there looking brooding and guilty all the time. But this is my biggest beef with both The Departed and Infernal Affairs. All four actors, DiCaprio, Damon, Leung and Lau look guilty as hell all of the time. Why doesn't anyone notice? I guess it's because it's a movie.

By far the best thing in The Departed is Jack Nicholson. He is the king of stealing films and he certainly does it here. You can say what you want about Jack always just playing Jack but he does it very well, and this is a perfect role for him. By far the best thing, in Infernal Affairs is Tony Leung. He is great. I loved him in 2046 (sorry Nic) and he is great here too. It is the good cop role which is more fun in both movies than the bad cop who is a bit repressed. Matt Damon doesn't get to be his usual ebullient self. And I assume the same is true for Andy Lau. You will recognize Jack's gang, Ray Winstone (Sexy Beast), Mark Rolston (The Shawshank Redemption) and David O'Hara (Braveheart). They are all great character actors. Their counterparts in Infernal Affairs do a good job of comic relief also. Even worse than DiCaprio in The Departed is the therapist girlfriend, Vera Farmiga. She just can't act. Both of the girlfriends in Infernal Affairs are better. Martin Sheen is good as always. But probably the most entertaining person in The Departed besides Jack is Mark Wahlberg. He is hilarious as Sheen's foul-mouthed deputy. My only general criticism of The Departed is that, like in the recent remake of All the King's Men, everyone has a different accent, even though they are all supposed to be Southies from Boston. Nicholson is the worst. Once in a while he drops a "r," but mostly he's just Jack. Damon and Wahlberg really are from Boston so they do OK.

Both movies are entertaining but The Departed has a little more Ummph. Scorsese really is a good director and The Departed really hums. One review, I read, mentioned that the Hong Kong cinema is heavily influenced by Scorsese movies, so really he is really remaking a Scorsese movie. The Departed also has quite a bit more running time, two hours and twenty-nine minutes, compared to one hour and forty-one minutes for Infernal Affairs. But The Departed never drags and the last 15 minutes of the movie are a bit stunning. I won't give any details but most of the characters "depart" bang, bang, bang at the end. There is a fair bit of blood and gore. But, like I said, the ending is not the same in the two movies. In fact, the DVD of the Infernal Affairs had two alternate endings, but neither one was the same as the ending of The Departed. You should see both movies and decide for yourself.