Warning! This review gives away important parts of the implausible plot of Deja Vu.

First, I'd like to say that I like stories involving time travel. They are fun. In particular, it's fun to see how they deal with all the paradoxes that occur as soon as you go back in time and start changing things. The other reason I wanted to see Deja Vu is that it was filmed in New Orleans post-Katrina. Deja Vu is a pretty good name for a time travel movie, although, as we all know, the feeling of Deja Vu is just a glitch in The Matrix. This new movie is just as implausible as The Matrix but its storyline doesn't hang together nearly as well. Since this is a Jerry Bruckheimer movie, things have to blow up. Bruckheimer produced Top Gun, Armageddon, Pirates of the Caribbean as well as countless other movies with big explosions. Deja Vu starts out with the ferry that runs across the Mississippi between New Orleans and Algiers (see picture below) blowing up with 500 people aboard on Mardi Gras. 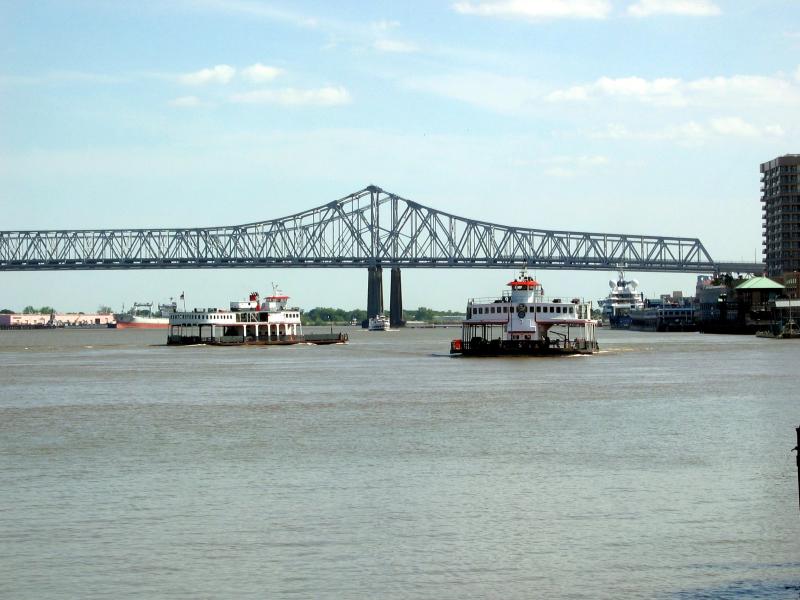 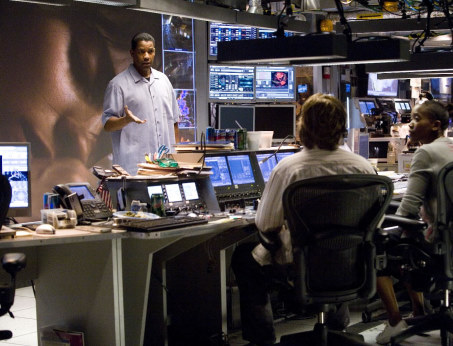 Among the many law enforcement types brought in to investigate the explosion is a local ATF man (Denzel Washington). Since this guy is Denzel Washington, he has the whole thing figured out before the FBI or anyone else. It is a terrorist bombing but one piece of evidence doesn't fit. A badly burnt woman's body (Paula Patton) is found floating in the river but she was killed an hour before the explosion. This wouldn't be much of a role for Patton except for the whole time-travel thing. Washington falls in with a bunch of FBI agents (Val Kilmer, Bruce Greenwood etc.) who keep exchanging knowing looks whenever Denzel says something. Eventually, they decide they need Denzel's help and so they take him off to a super-secret facility in New Orleans (see picture above). Although they try to fool Denzel into thinking they have some cool satellites, he figures out pretty fast that they have a machine that can look back in time, 4 days and 6 hours back to be exact. They can see everything that is happening at that time, but then it is gone and they can't rewind. It all has to do with wormholes. The head scientist guy (Adam Goldberg) even mentions the words, "Einstein-Rosen Bridge." Anyway, the machine can watch anything within a few miles of the facility. Who knows why it is in New Orleans. If you are outside the radius of the machine, you can still make it work by wearing a contraption over your eyes. Warning! Do not drive while wearing this contraption. But since this is a Jerry Bruckheimer movie, the more car crashes the better even if it makes no sense!

Where was I? Oh ya. I can't tell you much more of the plot without spoiling it all. Although, as the movie wore on, I just wanted to scream. The first half is OK but the second half is nuts. This is partly due to the time-travel paradox thing and partly due to the fact that DEnzel Washington's IQ seemed to have dropped 50 points when he traveled back in time. Oops. I may have spoiled something there. But you may have already figured out that Washington has to go back in time to stop the ferry being blown up, and that it must have something to do with the beautiful dead woman. Ya, she's pretty hot, and as the scientists follow her life of 4 days ago from every angle, they follow her into the shower. The only female scientist in the group wonders out loud what scientific or forensic purpose is served by watching her take a shower. This is the only sane, reasonable comment in the whole movie.

Deja Vu starts out pretty well. It was made by the Pros from Dover, producer Jerry Bruckheimer and director Tony Scott (Top Gun, Crimson Tide). And, it's nice to see New Orleans, even if they get a few things wrong like which side of the Mississippi is west and which is east. At one point, we see Washington riding a streetcar down St. Charles St. which is a bit difficult post-Katrina since they don't run anymore. The cast is good. Denzel is cool as always. I've always liked Adam Goldberg. I still get bad flashbacks to the scene where he gets killed in Saving Private Ryan. And it's fun to see Val Kilmer. He has been sorely missed. He never stopped making movies. They're just movies (The Salton Sea, Spartan) that no one, except maybe me, has seen.

The problem with Deja Vu is not just that the story makes no sense. It is dumb. Time travel was done much better this year in The Lake House. And my favorite time-travel movie is The Final Countdown where USS Nimitz commanded by Kirk Douglas gets sent back in time to the day before Pearl Harbor. (Put it on your Netflix list.) Some of the things at the end of Deja Vu are just beyond belief. And at the end of the movie you can't tell whether or not time has been restored to its proper course. In Star Trek, they were always very careful to make sure that the timeline was cleaned up, even if that meant killing Joan Collins.