The first Bond book by Ian Fleming was Casino Royale, published 1953. It is the only one of his books that has not been made into a "straight" Bond movie. There was a comedy version of Casino Royale, pictured below, that came out in 1967, starring David Niven, Peter Sellers, Woody Allen, Ursula Andress, Orson Wells, with a slew of cameo appearances by other stars. It's a mess of a movie but very entertaining. Put it on your Netflix list. 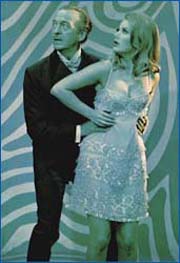 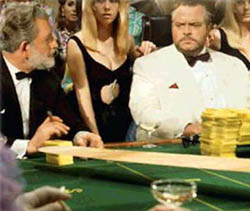 But now we have a real adaptation of Casino Royale, which is combined with the appearance of the newest Bond, Daniel Craig. He has some big shoes to fill, none bigger than those of Sean Connery. 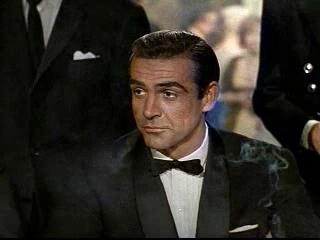 The new version of Casino Royale follows the book fairly closely, but with some important changes meant to bring it up to date. In the original, Bond is dispatched to a French casino to play Baccarat with Le Chiffre, who is a SMERSH agent, who has run afoul of his Russian bosses by losing millions by making a bad investment in a chain of brothels. He plans to make the money back playing Baccarat in time to pay off SMERSH before they kill him. The head of British Intelligence, 'M" sends Bond and fellow agent, Vesper Lynd, to beat Le Chiffre so that he will be killed. Lynd is very beautiful and, of course, she and Bond become lovers while Bond is beating Le Chiffre, with a little help from an American CIA operative, Felix Leiter. This being a Bond story, it can't be a simple as all that and it isn't. As on Twin Peaks, everyone has secrets. But I can't tell you the ending without spoiling the film. You can click here if you want to know.

In the film version, Le Chiffre, is working for terrorists (what a surprise) and instead of Baccarat in France, they play stud poker in Montenegro. As in the book, Le Chiffre is trying to make back some money he lost in a bad investment before he gets whacked. The main characters are all there, Bond (Craig), M (Judi Dench), Vesper Lynd (Eva Green), Le Chiffre (Mads Mikkelsen), and Felix Leiter (Jeffrey Wright). Also involved are another agent helping Bond (Giancarlo Giannini) and another beautiful woman (Caterina Murino) who is Le Chiffre's wife. And the secrets that I can't tell you are pretty much the same as in the book. I was wondering if the excruciating torture scene from the book would be in the movie. It is there and they didn't really tone it down at all. One entertaining addition is the opening scene where Bond has to chase down a guy (Sebastien Foucan) who will lead him to LeChiffre. They have a wild acrobatic chase in three dimensions. It is a great scene which reminded me of the action in District B-13.

The movie is pretty good and I like Daniel Craig. He was quite good in Munich where he also played a stone cold killer. He's good here with the right mix of nasty and nice. It's too soon to tell where he will fall in the pantheon of Bonds (Connery at the top, Moore at the bottom) but he has made a promising start. And keeping Judi Dench as M gives some nice continuity since we have lost Moneypenny, Q and also P. Dench is great and, by the way, is looking great too. And casting Jeffrey Wright (Angels in America) as Felix is very cool. Wright is an amazing actor and even though his part in Casino Royale is small, I assume he will be back in the next film. I hope he doesn't have to get eaten by the shark again! Eva Green (Kingdom of Heaven) who plays Vesper Lynd is a good addition to the Bond women. And because of the plot of Casino Royale, she gets to be a little more than the usual one-dimensional female we usually see in Bond films. Giancarlo Giannini (Lili Marleen, Hannibal) does a very nice job as the local agent. He does these little character bits now, and is so smooth and suave.

The director, Martin Campbell, is very experienced, and has even done a Bond film, GoldenEye. The movie moves along well and, as I said, the opening chase sequence is really great. The only beef I have is with the end of the movie. The movie runs a bit long, well over 2 hours and after we are finished with Le Chiffre, the denouement takes forever. Once you get to this part of the film, you will know what has to happen, but they draw it out and since this is Hollywood, they make it much more dramatic than in the book. This incident at the end of Casino Royale is very important to how Bond gets to be the way he is (i.e., not very nice), particularly with women. Click here if you want to know. Anyway, Bond is back. You gotta go see it.