When was the last time there was someone running for President that you actually wanted to vote for? When was the last time you were actually inspired by a politician's speech? This is what I was thinking as I watched the new film, Bobby, which follows fictionalized events at the Ambassador Hotel in Los Angeles on June 4, 1968, the day Bobby Kennedy was shot. Even though Kennedy appears only in newsreel footage and is heard in voiceovers, his presence hangs over this movie. I had "the undertoad" all the way through and a feeling of foreboding grew as the movie went on towards its inevitable conclusion. It is very emotional to hear Kennedy's words. His speeches are so different from what we hear today. This is from a speech he gave after Martin Luther King was shot, "But we can perhaps remember, if only for a time, that those who live with us are our brothers, that they share with us the same short moment of life; that they seek, as do we, nothing but the chance to live out their lives in purpose and in happiness, winning what satisfaction and fulfillment they can." Watching Bobby makes you kind of sad. 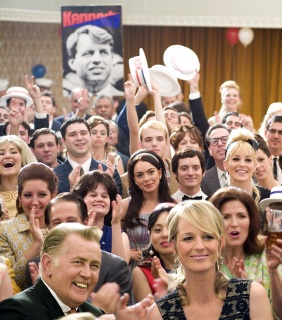 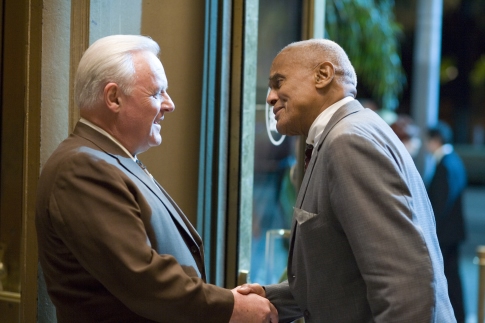 The characters include two retired hotel employees (Anthony Hopkins & Harry Belafonte), pictured above, who sit in the lobby all day, a young woman (Lohan) who is marrying a friend (Wood) to keep him out of the draft, the hotel manager (Macy), his hairdresser wife (Stone) and his switchboard-operator girlfriend (Graham), an alcoholic lounge singer (Moore), her agent (Krumholtz) and her long suffering manager husband (Estevez), the kitchen staff (Slater, Fishburne, Rodriguez and Jacob Vargas), a drug dealer (Kutcher), some young RFK volunteers (Shia LaBeouf, Joshua Jackson & Brian Geraghty) and a reporter (Svetlana Metkina) from Czechoslovakia.

Bobby consists mostly of vignettes among the many characters at the Ambassador Hotel starting early in the morning of June 4, 1968, as the kitchen staff is arriving. Each character is having a crisis of some sort, except maybe for Hopkins and Belafonte, who sit in the lobby playing chess as the action swirls around them. The clock ticks inexorably towards midnight. Kennedy arrives at the hotel, gives his acceptance speech for winning the California Primary and then leaves via the kitchen where he is shot by Sirhan Sirhan. Bobby makes no comment on the conspiracy theories that surround Bobby Kennedy's death, much as they surround his brother's assassination. As Sirhan shot wildly around the crowded kitchen, five other people were shot. They all recovered. In an unnecessary bit of drama in Bobby, all five of these people are characters in the movie who we have got to know during events of the day at the hotel.

Bobby was written and directed by Emilio Estevez. He took 7 years to write the screenplay and raise the money to make the movie. He did it just in time because the Ambassador Hotel was slated for demolition. The scene of the Kennedy assassination were filmed in the kitchen of the hotel where it actually took place. The hotel is now gone. Bobby was a labor of love for Estevez and it is mostly successful, particularly in evoking the emotions of 1968. I was verklempt throughout the movie. A couple of the subplots in Bobby don't work well, particularly the one where drug dealer, Ashton Kutcher, gets a bunch of Kennedy volunteers high on LSD. But most of the subplots are good and it's kinda fun just to see all the actors in this movie. The number one pleasure is seeing Harry Belafonte. He's does a great job as does Hopkins. But then Hopkins is always great. Among the other 20 actors in Bobby, two stand outs are Christian Slater as the manager of the hotel kitchen, and Freddy Rodríguez as a busboy who loves the Dodgers. June 4, 1968 was also the day that Don Drysdale set the record for consecutive scoreless innings pitched. Kennedy even mentioned it in his speech that night. Estevez still looks just about as dweeby as he did when he was a member of the Brat Pack. But he also looks a lot like his father (Martin Sheen) who is also in Bobby. Estevez and Sheen don't have any scenes together. Neither do husband and wife, Demi Moore and Ashton Kutcher.

Even though I saw Bobby on a Saturday evening, the audience was made up of old people like me and even older. And it was racially mixed. Most movies I go to in Baton Rouge, except for the blockbusters, tend to have mostly white or black audiences. Two elderly African-American ladies sat in front of me, talking and even singing along with the soundtrack. I guess they don't get out much. Anyway, I hope some younger audiences see this movie. It has a powerful message which resonates today. Bobby doesn't have quite the power of Good Night and Good Luck, but it delivers its message very clearly.