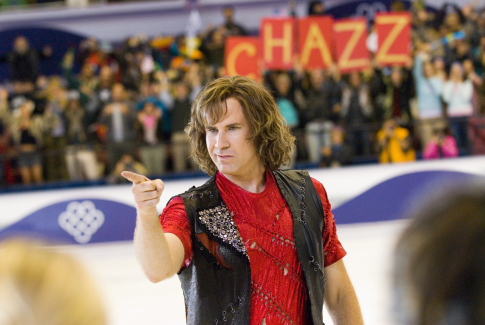 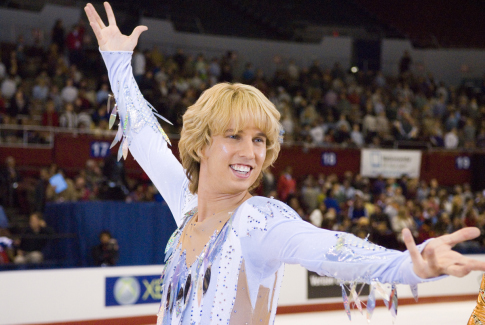 Blades of Glory tells the story of the top two men's singles skaters in the world (Will Ferrell & Jon Heder). They are pictured above. They don't like each other much and after they have a brawl on the podium at the World Championships, they receive lifetime bans from men's singles skating. An out-of-work coach (Craig T. Nelson) points out that they are only banned from men's singles, and suggests that they enter the pairs competition together. Nelson is out of work because of the decapitation of one of his previous skaters while attempting the "Iron Lotus." Sound funny? Oh, it gets better. Heder was an orphan who was adopted by a mean nasty billionaire (William Fitchner) when he showed promise as a figure skater. The main competition for Ferrell and Heder is a brother-sister team (Will Arnett & Amy Poehler). They are also mean and nasty, and treat their nice little sister (Jenna Fischer) as a slave. This is all meant to be hilarious. A number of actual former skating stars make cameos, including Scott Hamilton, Brian Boitano, Dorothy Hamill, Peggy Fleming, Sasha Cohen, and Nancy Kerrigan. It's nice to see them but considering the low level of humor in Blades of Glory, I'm surprised that Tonya Harding didn't make an appearance. You may have noticed that even though this movie is about Olympic figure skating, there is no mention of the Olympics. That is because the word, "Olympics" and the ring motif are jealously guarded registered trademarks. The "Olympics" in the movie are set in Montreal. The athlete's village is actually the Habitat built for Expo '67.

The problem with Blades of Glory is not Will Ferrell. And Jon Heder, as everyone knows, was hilarious in Napoleon Dynamite. Ferrell would be funny reading from the phone book, and considering what passes for a script in Blades of Glory, he might as well have been reading from the phone book. The difference between Ricky Bobby, a silly stupid comedy at which I laughed out loud through the whole movie, and Blades of Glory a silly stupid comedy at which I laughed out loud once, is that even though Ricky Bobby was silly and stupid, it had a funny script. Blades of Glory is one long sight gag, which would be ok, except that it's the same sight gag throughout the whole movie. Blades of Glory is based on the premise that there is noting funnier than two heterosexual guys skating together. Of course, it wouldn't be funny if they were gay, so much of the film is devoted to showing how macho Will Ferrell's character is, and that even though Heder is very effeminate, he gets the girl, in the person of Jenna Fischer (The Office), to show that he is straight too. So Ferrell, Heder and Fischer's characters sort of make it to one-dimensional. The other characters are less than one dimensional. The fact that any of Blades of Glory is funny, is a testament to the blood, sweat and tears of Will Ferrell. He's a trouper, and he throws himself into his role, such as it is, and makes it funny. Take a look at this Will Ferrell short, The Landlord, that recently appeared on youtube. It has more laughs in 2 minutes and 24 seconds than all 93 minutes of Blades of Glory. But if you haven't seen Blades of Glory yet, you should go see it. You will probably think it's pretty funny.