Before the Devil Knows You're Dead

There are some similarities and differences between two movies now in the theatres, Before the Devil Knows You're Dead and No Country for Old Men. Both have veteran directors who don't mind leaving a few dead bodies lying around, and most of the characters in both movies end up dead. But the similarities end there. In No Country for Old Men, you feel like the deaths are inevitable, caused by an unstoppable force of nature, while in Before the Devil Knows You're Dead, the deaths are caused by a couple of dumb fucks. See picture below left. The dumb fucks are two almost estranged brothers (Philip Seymour Hoffman & Ethan Hawke). Hawke is a total loser. He is divorced from his wife (Amy Ryan) and three months behind on his child support. What money he has goes for booze. At first glance, Hoffman is much better off. He has a nice job and a gorgeous wife (Marisa Tomei). But Hoffman has a little heroin problem and he is stealing from his company to pay for his drug habit. Plus his wife is having an affair with his brother. Their aged parents (Albert Finney & Rosemary Harris) run a small jewelry store. Both the two brothers need money so they and a friend (Brian F. O'Byrne) hatch a plan to rob their parents' store. Sounds simple right? Not if you are a couple of dumb fucks. The robbery goes horribly wrong and soon the brothers are in a world of pain. The more they try to get out of the mess that they have made, the worse it gets. More robberies, blackmail, and murder follow. By the end of the movie, six people are dead for no good reason. 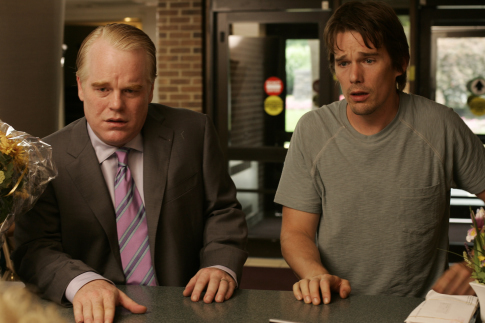 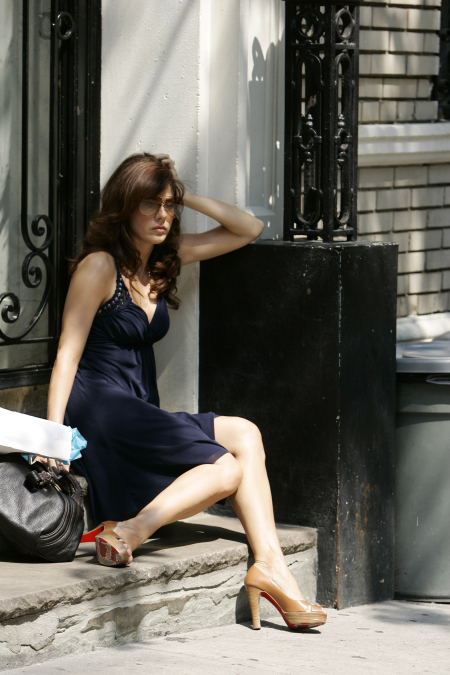 Ok, what's good about this movie? Hmmm. Marisa Tomei looks very good. See picture above right. The reason I know this is that she has her top off in half of her scenes in the movie. Maybe it just seems that way. Despite all the murders, the scariest part in the movie is the opening scene which launches suddenly with no warning into some very graphic sex. It's scary because of the person Tomei is having sex with, Philip Seymour Hoffman. After the first scene, you are kind of in a daze for the rest of the movie. Maybe this is so you can identify with the dazed brothers, Hawke and Hoffman. Before the Devil Knows You're Dead is directed by Sidney Lumet, who has been nominated four times for a Best Director Oscar (12 Angry Men, Dog Day Afternoon, Network, The Verdict). There is some similarity between Before the Devil Knows You're Dead and Dog Day Afternoon too. It's another movie about two dumb fucks in a death spiral. Oh yes, Before the Devil Knows You're Dead is a death spiral and you will feel like you are going down the tubes with it.

This movie has a great director, a great cast, two Oscar winners (Hoffman, Tomei), three Oscar nominees (Finney, Harris, Hawke), a Tony winner (Brian F. O'Byrne) and a Tony nominee (Amy Ryan). I guess they all wanted to do a movie with Lumet. First time screenwriter, Kelly Masterson said this about his script, "I don't know. It was winter, and I was depressed I guess when I was writing it. I'm fascinated by the folly of human nature. I love characters who we understand and sympathize with, but we just shake our heads at how stupidly they act." I was definitely shaking my head while watching this movie but I didn't understand and sympathize with the dumb fucks. May you be in heaven for half an hour before the devil makes you watch this movie.