It is amazing that one of the hottest screenwriters in Hollywood today died way back in 1817. But here in 2007, Jane Austen is hot, hot, hot. The only dead screenwriter, other than Shakespeare, who approaches Austen in hottiness right now is Philip K. Dick, who died in 1982. Nine of his works have been produced posthumously, starting with Blade Runner in 1982. In her life, Austen only wrote six books, so film and TV producers have been forced to make them over and over again. Thirty-nine productions of the six books are listed in the IMDB since 1939. But it was a very wet Colin Firth as Mr. Darcy that set off the current Austen explosion. Since then, there have been four productions each of Pride & Prejudice and Sense & Sensibility, two of Persuasion, Mansfield Park and Emma, as well as one of Northanger Abbey. This doesn't count films like Clueless which is an updated (and very entertaining) version of Emma. Masterpiece Theatre is presenting all six novels this coming season on PBS. Therefore, it seems logical that a biopic of Jane Austen, herself, wouldn't be long in coming. Hence, Becoming Jane, a highly fictionalized account of a young Jane Austen (Anne Hathaway) as she begins her writing career. This film has been shot and structured to make the lives of Austen and Elizabeth Bennet seem to be eerily similar. This can be seen in the two pictures below: Anne Hathaway as Austen (left) with two of her suitors (James McAvoy and Laurence Fox), and Matthew Macfadyen and Kiera Knightley as Mr. Darcy and Elizabeth Bennet in the most recent version of Pride & Prejudice. 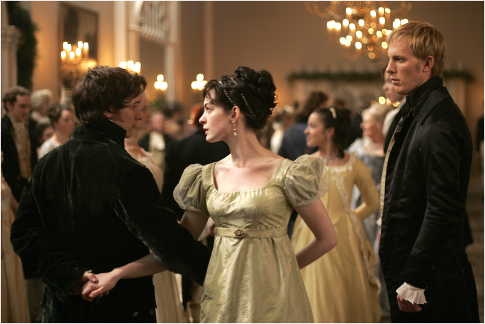 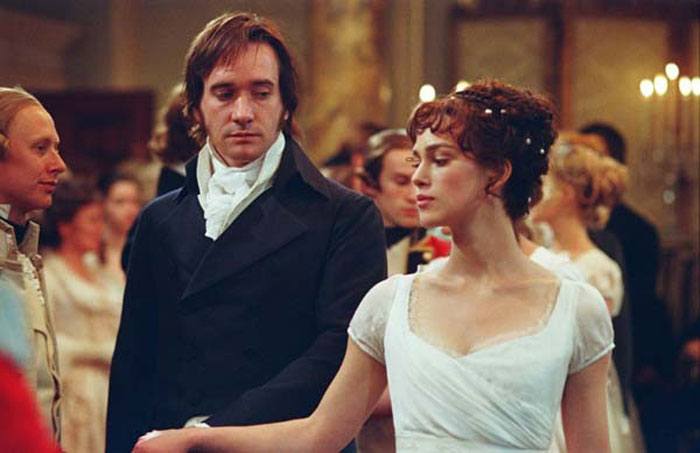 In addition to the obvious similarities seen in these pictures, Austen's mother (Julie Walters) in Becoming Jane is a carbon copy of Mrs. Bennet (Brenda Blethyn), and Lady Gresham (Maggie Smith) is Lady Catherine de Bourg (Judi Dench), right down to the wild gray hairdo. Becoming Jane puts forward the theory, suggested in the past, that a young man, Tom Lefroy (McAvoy), who she met, and flirted with as a young woman, was the basis for the fictional Mr. Darcy. In reality, all that is known about their relationship is contained in references to him in two of Austen's letters to her sister. This huge void has been filled in Becoming Jane by a fictional tale of thwarted love. Jane and Tom meet, but like Mr. Darcy and Lizzie, they don't hit it off right away, although sparks do fly. Eventually, they fall in love, try to get their families to agree to their marriage, and failing that, try to elope, but it all comes to naught. So left alone, Jane must channel her hurt feelings into her writing.

The result of all these machinations is a cute little movie. The cast is very good and likeable. Anne Hathaway gets to play a character not very much different from the one she recently played in The Devil Wears Prada. She does well with Jane Austen and is pretty good with the English accent too. James McAvoy burst onto the scene last year with his amazing role in The Last King of Scotland. Previously, there had been a glimmer of what was to come when he played Mr. Tumnus in The Lion, The Witch and the Wardrobe. Now he seems to be everywhere. This week, he was at the Venice Film Festival debuting, Atonement. But he is great as the real-life Mr. Darcy. How could Jane not fall in love with him? The supporting cast is a bit wasted but they do well including Walters, and Smith. James Cromwell, who plays Jane's father, again reminiscent of Donald Sutherland in Pride & Prejudice, is good as always. I always forget that he is American since he always seems to be playing someone British (The Queen) or Australian (Babe).

Becoming Jane feels like Pride & Prejudice-lite, and several times I felt like I would rather just be watching the real thing. There are lots of versions to choose from!