Ok, don't feel bad if you've never heard of this movie. Remember when Sponge Bob Square Pants was just a little 12 minute cartoon show on Nickelodeon? Well, Aqua Teen Hunger Force is a little 12 minute cartoon show on the Cartoon Network. When my student, Caroline, first said that I had to go with her and her friends to see the Aqua Teen Hunger Force movie on opening night, I said, "What?" You see, I'm not nearly as hip and with it as I try to appear. So, don't feel bad if you didn't know that this movie with the "Borat" title is based on a show that isn't about water or teens but does have something to do with hunger. The three main characters are Frylock, Master Shake and Meatwad. They are pictured below. You can figure out which one is which. There are a few other characters, i.e. Carl, Dr. Weird and the Mooninite Soundboards. The plot outline listed on IMDB goes like this: "An action epic that explores the origins of the Aqua Teen Hunger Force (better known as Master Shake, Frylock, and Meatwad,) who somehow become pitted in a battle over an immortal piece of exercise equipment. Perhaps I'll just leave it at that. Watch an episode. In only 12 minutes, it all will become clear to you. 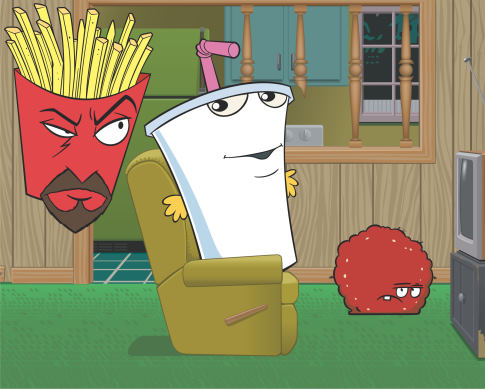 Now, it turns out that I had actually heard of Aqua Teen Hunger Force, but I didn't know it. On Jan. 31, the city of Boston was brought to a halt by some "things" that some people thought looked like bombs but were actually Mooninites. Click here for an explanation. The movie itself, well, let's see, when you expand a 12 minute cartoon to 86 minutes, there's a good chance it will drag a bit, even if you explore the origins of Master Shake, Frylock, and Meatwad, and battle an immortal piece of exercise equipment. But it's worth seeing the movie just for the first 5 minutes. They put a priceless spin on the old Let's all Go to the Lobby movie trailer. The singing popcorn, soda, etc. are drowned out by a death metal band made up of other concessions, who sing about not talking, turning off your cellphone and other "do's and don'ts" in the movie theatre. After that amazing opening, maybe Aqua Teen Hunger Force had to go downhill a bit. But Master Shake, Frylock, and Meatwad give it their all for 86 minutes. And I do love Frylock....