For better or for worse, it is impossible to review a film by Mel Gibson, even one in which he doesn't appear, without reviewing Mel as well. This is particularly true since the controversies of his last film, The Passion of the Christ, and his recent brush with the law. I try not to judge movies on the basis of the personal lives of the stars, but with Mel what can you do? He has had a long and successful career and has made some good movies. And I have to ask, who else could make a movie in Mayan with subtitles that opens as the number one box office film in the United States? The main question raised by Gibson's new film Apocalypto is, what is it with him and extreme graphic violence? Even when he was just acting in films, they were mostly violent, beginning with the Mad Max series and continuing through Lethal Weapon one through four. This has continued in the films he has directed. His first film, was The Man Without a Face which had no violence, just the permanent mark of past violence on Gibson's face. His next two films, Braveheart and The Passion of the Christ, are well known for their many scenes of graphic violence. This brings us to Apocalypto, which raises the depiction of violence onscreen to a new level. And it's not just that there are lots of scenes so gross that you have to close your eyes, but it is the joy of violence. One has to go to cartoonish films like Kill Bill: Vol. 1, Starship Troopers, and Sin City to see the same levels of blood and gore and the happy smiles about it. 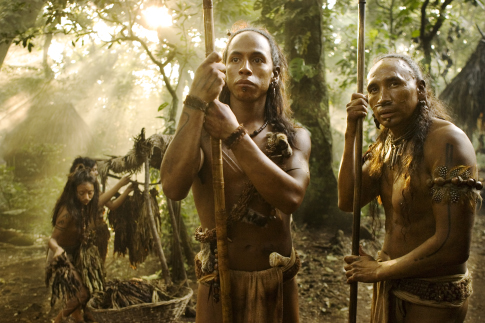 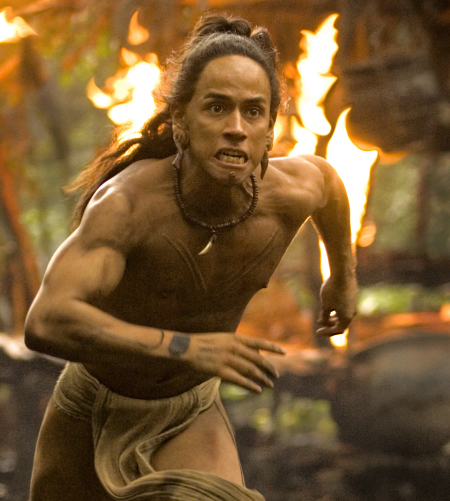 Apocalypto tells a story set at the end of pre-Spanish-conquest Mayan life. The story is a bit anachronistic since it is set just as the Spanish are arriving but the great Mayan cities had been abandoned long before this. Nevertheless, Apocalypto begins in a peaceful village where the people are living in harmony with the forest. Our hero, Jaguar Paw (Rudy Youngblood) lives with his pregnant wife and young son. He is being schooled in the ways of the forest by his father. Enjoy this 15 minutes of idyllic peace (above left) because that's it for the whole movie! After that, the remaining 2 hours and 14 minutes of Apocalypto is like the picture above right but with a lot more blood. The village is attacked by fierce warriors from the big city, led by a nasty guy named Zero Wolf (Raoul Trujillo). They kill or kidnap everyone in the village except for Jaguar Paw's wife and son who hide at the bottom of a cenote. Unfortunately, since Jaguar Paw is a prisoner, his wife and son are trapped and can't get out. She is 9 months pregnant and they have no food. Meanwhile, the captives are dragged off by the sadistic bad guys to be sacrificed in the Mayan city. There has been a drought so many sacrifices are needed. Several of Jaguar Paw's fellow villagers are sacrificed, first by having their hearts ripped out of their chests, then being beheaded and finally rolled down the steps of a pyramid. Jaguar Paw is saved when a total eclipse of the sun occurs to amaze the crowd. The priest and king of the city obviously know the eclipse is coming, which is realistic, but the eclipse progresses a little faster that it should. Anyway, the bad guys then make a game out of killing the rest of the captives, but Jaguar Paw manages to escape. He takes off to rescue his family before they starve to death with the bad guys hot on his trail. This last part of the movie is one long chase with Jaguar Paw playing Butch Cassidy and the Sundance Kid and the bad guys playing the Posse. They pretty much cover all the scenes from the big Butch Cassidy chase, including jumping off a waterfall. I won't spoil the ending of Apocalypto, but let me say that whether they are good guys or bad guys, they are all pretty much doomed. This is foreshadowed in Apocalypto when they pass a child obviously suffering from smallpox.

If it weren't for the over-the-top giddy violence of Apocalypto, I'd be giving it a pretty good review. It has a compelling story and it is well put together. Gibson may be a nutcase but he can direct a movie. The device of having the actors speak their lines in Mayan with subtitles works quite well. And the actors are good, particularly Youngblood who plays Jaguar Paw. But the movie is totally sabotaged by the level of onscreen, in-your-face blood and gore. People are killed and maimed with spears, arrows, and clubs. Many are eviscerated. Blood spurts everywhere. You can try closing your eyes, but so much of Apocalypto is taken up with these yucky scenes that you end up with your eyes closed for large portions of the movie. And Gibson totally loses it by the end of the big chase that is the climax of Apocalypto. The many and various ways, that he thinks up to kill people, become hilarious, sort of like Snakes on a Plane. The bad guys chasing Jaguar Paw hit him with arrows, spears and clubs, while they die by waterfall, quicksand, jaguar, snake, booby trap, frog poison, and bees. It is like a horror-movie version of Swiss Family Robinson. I can't even recommend waiting for the DVD and using the fast forward button. You'd be watching the whole movie in fast forward. Yuck.