The latest graphic novel by Frank Miller to be transferred to the big screen is 300. The number '300' refers to the number of Spartan soldiers who fought against the Persians at the Battle of Thermopylae in 480 BC. The invading Persian army, commanded by Xerxes, numbered somewhere between 200,000 and 5 million. Leonidas, one of the two kings of Sparta, led a small force, actually about 5,000 soldiers, of whom 300 were Spartans. The force was small because the Persian landing coincided with a religious festival and also the Olympic games. The battle became iconic as the small Greek force held off the Persians for 3 days at a narrow pass causing many thousands of casualties to Xerxes army. The Greeks were eventually betrayed by local man who led the Persians behind the Greek lines and surrounded them. The Spartan 300 stayed behind as a rear guard so the rest of the Greek soldiers could escape. Leonidas and his soldiers were killed in a last hail of arrows, the location of which has been identified by archaeologists.

The movie, 300, follows the historical facts fairly closely although they create a subplot where an evil Spartan senator (Dominic West) tries to betray the Greeks by selling out to the Persians. In the movie, they also make a big deal out of Leonidas (Gerard Butler) heading off to war during the religious festival when in reality, most Greeks just thought that they could wait until the Olympics and the festival were over before heading off to the battle. The pictures below show Leonidas with the 300, and also as just a family man with his wife (Lena Headey) and son. But lots of details in the film are historically correct, at least according to Herodotus and other historians of the day. The Persian emissaries were actually thrown into a well after asking for "earth and water" as a token of submission. Leonidas did respond to Xerxes' request that the Greeks lay down their arms with, "Come take them." And one of the Spartan soldiers, when told that the Persian arrows would blot out the sun, said, "So much the better, we shall fight in the shade." 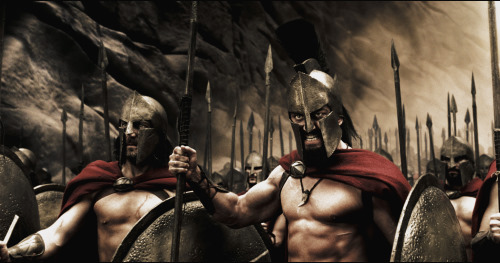 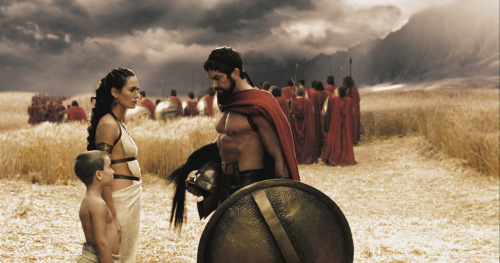 Lots of things are probably not historical. The Greeks were attacked by Xerxes crack troops, called The Immortals, but I doubt that they were Ninjas as they are portrayed in the movie. The Spartans remind one of the combat happy joes of easy company. They are like the Klingons and the Sioux, who happily proclaim that this is a good day to die, or as Leonidas says, "tonight, we dine in hell." The 300 even chant "hoo yah" like the the few, the proud, the Marines. And since Butler plays Leonidas with his natural Scottish accent, it reminded me of Braveheart as well. Leonidas' Queen, Gorgo, is a real Spartan too. When the Persian ambassador asks why he has to speak with a woman, she says, "because only Spartan women give birth to real men." Butler gives a great, over the top performance as Leonidas, and Headey gives his queen an almost 2 dimensional character. Another familiar face among the 300 is David Wenham who was Faramir in LOTR.

300 is shot with a very stylized graphic novel look. It is much more realistic than Sin City but it has a comic book look to ,it including perpetually dark skies that project a constant mood of dread. Once the battle starts, 300 might as well be Apocalypto or Starship Troopers. The blood and gore, decapitated heads and sliced-off arms fly with abandon. This along with some sex and rape all make 300 deserve its 'R' rating. So why, oh why, were there many young kids and babies in the theatre last night I ask? I guess 300 is fun for the whole family. On the whole, I liked 300 but it is not a subtle depiction of the fog of war and its shades of gray. In 300, even the women give as good as they get. I wouldn't want to meet Queen Gorgo in a dark alley! But there is a kind of infectious enthusiasm about the 300. This movie is over the top all the time. So, you just have to go with it. After all, it just took in $70 million at the box office this weekend. Tonight, we dine in Hell!